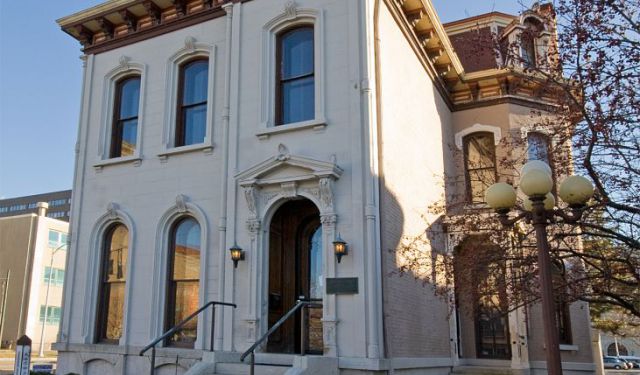 Image by Greg5030 on Wikimedia under Creative Commons License.

Dayton is a modern city with a number of museums and galleries, including America's Packard Museum, exhibiting an excellent collection of cars, and the Dayton Art Institute, where you can admire old and contemporary works of fine art. Take the following tour to visit Dayton’s most fascinating museums and art galleries.
How it works: Download the app "GPSmyCity: Walks in 1K+ Cities" from iTunes App Store or Google Play to your mobile phone or tablet. The app turns your mobile device into a personal tour guide and its built-in GPS navigation functions guide you from one tour stop to next. The app works offline, so no data plan is needed when traveling abroad.

America's Packard Museum is an automotive museum located in Dayton. The building is a restored Packard dealership transformed into a museum that displays twentieth-century classic Packards and historic Packard artifacts and memorabilia. Originally, The Citizens Motorcar Company sold Packards in Dayton, Ohio beginning in 1908, and moved into what is now the museum building in 1917. Robert Signom II, the museum's Founder and Curator, acquired the building in 1991 and painstakingly rehabilitated it to its original Art Deco grandeur. The original 20' tall porcelein and neon Packard sign, removed from the building in the early 1940s, returned to its former position at the corner of Ludlow and Franklin Streets in 1992, for the grand opening of the museum. Since that time, the museum has grown in size and stature, winning the James Bradley Award of the Society of Automotive Historians in 2004. Car Collector magazine has also named the museum one of its "Top Ten" automotive museums.

More than 50 cars are on display, from 1900s Brass Era cars to the streamlined Classic cars of the 1930s and 1940s, and modern Packards of the 1950s, as well as war machines, parts, accessories, and original sales and service literature. A notable highlight of America's Packard Museum is the original Articles of Incorporation of the Ohio Automobile Company, which later became Packard. It is open seven days a week, year round, and is closed only on Thanksgiving, Christmas, and New Years Day.

Image by J Clear on Wikimedia under Creative Commons License.
Sight description based on wikipedia
2

Located in the Cannery district, the K12 Gallery features artwork created by children. The only gallery in the state to regularly display the work of children, visitors can enjoy beautiful watercolors, landscapes, abstract pieces and more. This gallery also offers art classes for those interested. It is open Monday through Thursday from 9:30 am to 5:30 pm, and Saturday from 10:00 am to 1:00 pm.
Image by Ishmael Orendain on Flickr under Creative Commons License.
3

Dayton Visual Arts Center (DVAC) is a group of artists and art lovers who believe that a vital visuals arts community is essential to the life of the community in Dayton. The center offers gallery talks, art exhibitions, professional development workshops and other programs that support contemporary visual art. Since 1991, DVAC's gallery presents a full schedule of contemporary art exhibitions each year that are free to the public. The exhibitions include the annual Open Members' Show, the ARTtoBUY Holiday Gift Gallery, and a preview exhibition leading up to DVAC's annual art auction fundraiser.

Jane Black took over as DVAC's executive director in 2003. Notable artist members of DVAC are Jud Yalkut, an internationally-known pioneer in the field of video art and Bing Davis. In 2006, acclaimed sculptor, Jun Kaneko, presented his redesign for the opera Madame Butterfly in the gallery. A 2009 exhibit included work by Curtis Mann, a 2010 Whitney Biennial participant and in 2010 the "REACH Across Dayton" exhibit included work by Cuban born artist Eduardo de Soignie and a public art installation by Juan-Si Gonzalez.

Operation Hours: Tuesday - Saturday: 11 am - 6 pm
Image by ruthieonart on Flickr under Creative Commons License.
Sight description based on wikipedia
4

The Dayton International Peace Museum is a museum located in Dayton at 208 West Monument Avenue. It is the second peace museum to be created in the United States, with The Peace Museum in Chicago, Illinois being the first.

The Dayton International Peace Museum is a place for children and adults to find positive, nonviolent alternatives to a culture of violence. The Peace Museum serves not only as a traditional museum that displays peace-related objects of permanent value, it also serves as a vibrant activities center for those who seek a community of peace. It features permanent, temporary, and traveling exhibits that highlight the rich history and potential of nonviolent solutions.

The Dayton Art Institute (DAI) is a museum of fine arts in Dayton. It was rated one of the top 10 best art museums in the United States for kids. The museum also ranks in the top 3% of all art museums in North America. In 2007, the art institute saw 303,834 visitors.

Founded in a downtown mansion in 1919 as the Dayton Museum of Fine Arts, the museum moved to a newly designed Edward B. Green building in 1930. The DAI was modeled after the Casino in the gardens of the Villa Farnese at Caprarola, and the front hillside stairway after the Italian Renaissance garden stairs at the Villa d'Este, near Rome, and Italy. The museum was later renamed the Dayton Art Institute as an indication of the growing importance of its school in addition to the museum. The nearly 60,000-square-foot (5,600 m2) building is now listed on the National Register of Historic Places.

The museum's collection contains more than 20,000 objects spanning 5,000 years. In September, 2005, the Museum became one of eleven galleries in the US to host The Quest for Immortality: Treasures of Ancient Egypt, the largest collection of ancient artifacts ever to travel outside Egypt.

The art museum is an Italian Renaissance-style building, which sits atop a hill overlooking downtown Dayton. The Institute's highlights are the museum's Asian, 17th-century Baroque, 18th- and 19th-century American, and contemporary art collections. In addition to its collections, the museum frequently features other exhibitions.

Create Your Own Walk in Dayton

Creating your own self-guided walk in Dayton is easy and fun. Choose the city attractions that you want to see and a walk route map will be created just for you. You can even set your hotel as the start point of the walk.

Dayton is home to a number of impressive religious buildings designed in a variety of styles, many of them included in the National Register of Historic Places. Take the following tour to discover Dayton’s most impressive houses of worship.

Nicknamed the "Gem City", Dayton - a charming Ohio city and the hometown of the Wright brothers - has gone down in history primarily as the Birthplace of Aviation. Apart from aviation, however, there are quire a few cultural and otherwise notable attractions in Dayton well-worth exploring. To learn more about the most prominent of them, follow this orientation walk and explore!