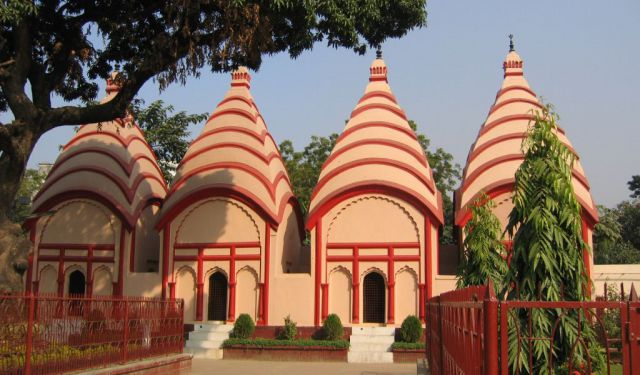 Image by Ragib Hasan on Wikimedia under Creative Commons License.

Bangladesh is a country whose main religion is Islam. Muslims constitute about 80 percent of the population. Hindus follow them with 16 percent. Dhaka boasts many magnificent mosques and Hindu temples as well. One of the most beautiful and famous temples is Dhakeshwari Temple. Don’t miss the opportunity to visit the beautiful places of worship Dhaka has to offer.
How it works: Download the app "GPSmyCity: Walks in 1K+ Cities" from iTunes App Store or Google Play to your mobile phone or tablet. The app turns your mobile device into a personal tour guide and its built-in GPS navigation functions guide you from one tour stop to next. The app works offline, so no data plan is needed when traveling abroad.

The Aeroplane Mosque is an unusual community mosque. It is located in a narrow five-story building and is housed on the first and second floors of this structure. It was established by a shop-owner. There is an aeroplane on the roof of this building which is why this mosque is called the “Aeroplane Mosque.” The building also became a city landmark due to its interesting usage and its aeroplane.
Image by 4028mdk09 on Wikimedia under Creative Commons License.
2

The mosque houses the Islamic Economics Research Bureau, which works to "synergize the intellectual capabilities of the modern day professionals, academicians, and students of Islamic Banking and Finance". Other Islamic organizations like Islam Prochar Samity (Association for Preaching Islam), Hizb ut-Tahrir Bangladesh and Liberated Youth, are around the corner. Many of these Islamic organizations are at the front line of preaching of orthodox Islam in Bangladesh. There has been claims to associate the Masjid Mission with Jamaat-e-Islami Bangladesh. Muslim protesters gather around the mosque, while students of neighboring University of Dhaka has protested against the activities conducted at the mosque.

Image by Almaaida on Wikimedia under Creative Commons License.
Sight description based on wikipedia
3

The establishment of the university was a compensation of the annulment of the 1905 Partition of Bengal. The partition had established East Bengal and Assam as a separate province, with Dhaka as its capital. However, the partition was abolished in 1911. In 1913, public opinion was invited before the university scheme was given its final shape. The secretary of state approved it in December 1913. The first vice-chancellor of the university, Dr. Philip Joseph Hartog, formerly academic registrar of the University of London for 17 years.

Image by Ranadipam Basu on Wikimedia under Creative Commons License.
Sight description based on wikipedia
4

Kakrail Mosque is a mosque located near Ramna Park in Dhaka. It is the center of all Tablighi activities in Bangladesh.

Basically, it is to Bangladesh what Nizamuddin and Raiwind are to India and Pakistan respectively. Just like all Tablighi centers, the motto of those frequenting this mosque is that all people should live in peace and all people should get ultimate success in this world as well as the hereafter by gaining salvation from hell and gain entry into paradise. They mostly talk about affairs above the sky (about Allah, Jannat, Jahannam and His Angels) and that of below the earth (of the grave and the hereafter).

Khwaja Shahbaz’s Mosque is placed in the same neighborhood as Dhaka High Court and Tin Netar Mazar. According to the inscription on the mosque entrance door, the structure was built in 1679 by Kwaja Shahbaz. It is quite a small structure, at about 20 meters long and 7 meters wide, but it displays a lot of interesting features. The mosque has three domes on a spacious oblong structure rest upon a raised platform. There are three arched doorways on the eastern wall. Each corner of the mosque has an octagonal pillar. The tomb of Khwaja Shahbaz is also inside.
Image by Muntasir du on Wikimedia under Creative Commons License.
6

The mosque is located at the Bangladesh University of Engineering and Technology (BUET) in Dhaka. The two-story mosque looks magnificent due to its complex and harmonious design, mainly made of red bricks. There is a charming ornamentation above the entrance.
Image by Ragib Hasan on Wikimedia under Creative Commons License.
7

Dhakeshwari National Temple is a Hindu temple in Dhaka and is state-owned, giving it the distinction of Bangladesh's "National Temple". The name "Dhakeshwari" means "Goddess of Dhaka". Since the destruction of Ramna Kali Mandir in 1971 by the Pakistan Army during the Bangladesh Liberation War, the Dhakeshwari Temple has assumed status as the most important Hindu place of worship in Bangladesh.

Dhakeshwari Temple is a hub of socio-cultural as well as religious activity. Each year, the largest celebration of Durga Puja (the most important event in the Bengali Hindu calendar) in Dhaka is held at the National Temple, and a stream of dignitaries (such as the Bangladeshi President, Prime Minister, Leader of Opposition, Members of Parliament and media celebrities) come to felicitate the Bangladeshi Hindu community from the temple premises. Several thousand worshippers and onlookers (including Muslims) stream through the premises where they are offered prasad (food - usually rice and lentils). A Bijaya Sammelani (cultural program following Durga Puja) takes place in the adjoining parade ground a few days after Durga Puja is complete, and is also a major cultural event in the Dhaka calendar, regularly attracting some of the top performers from the Dhaka music and film industry.

The Dhaka New Market Mosque is located inside the Dhaka New Market, a shopping complex. The complex has a triangular form with a charming triangular park in the middle. The mosque is placed at the first floor level inside this green park and features an impressive minaret. As a whole, it is an interesting architectural project.
Image by Hameem Shakhawat on Wikimedia under Creative Commons License.