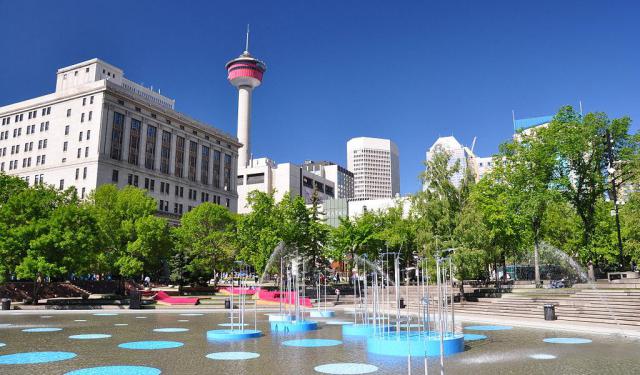 Image by abdallahh on Wikimedia under Creative Commons License.

As the biggest city in Alberta, Calgary has quite a few things to offer. One should definitely start getting acquainted with the city in its downtown area. Not only will you find the most prominent landmarks, but you will also get an idea of what Calgary is like. Take this walk to discover the eastern part of downtown with its rich cultural and historic heritage.
How it works: Download the app "GPSmyCity: Walks in 1K+ Cities" from iTunes App Store or Google Play to your mobile phone or tablet. The app turns your mobile device into a personal tour guide and its built-in GPS navigation functions guide you from one tour stop to next. The app works offline, so no data plan is needed when traveling abroad.

Old City Hall is an iconic building in Calgary that celebrated its 100 years recently. Robert Borden, the Conservative opposition leader opened the new sandstone city hall building in 1911 as a venue that would host sessions to discuss questions of interest to Canadians.

This building was constructed after the Old City Hall was torn down. Designed by architect William M. Dodd, it reflects the Richardsonian Romanesque style. Built at a much higher cost as compared to the estimate, this city hall saw its sandstone supply coming from Bone and Oliver quarry on 17th Avenue SW. Sandstone has indeed withstood the vagaries of the weather and the building stands firm today after 100 years. Its exterior was restored in the 1980s and the interior was redone between 1995 and1997.

Do not miss the beautiful and elegant interior of this building that is one of the few classic, original city halls still in existence in Canada. On your trip to Calgary, be sure to include the Old City Hall in your itinerary.

The Old City Hall is a significantly important heritage building in Calgary that is especially known for its architectural beauty located in the urban and economic center of Southern Alberta.

Image by Thivierr on Wikimedia under Creative Commons License.
2

Olympic Plaza is one of the popular tourist attractions in Calgary, Canada. This plaza was constructed during the 1988 Winter Olympics exclusively as a venue for medal presentation. Here you will find a legacy hall that commemorates the winners through display of plaques. Today, Olympic Plaza is used for hosting festivals and concerts.

Olympic Plaza is abuzz with activities during the cheery summer months. There are festivities and music in the air and sparkling water fountains. During lunch hour, downtown patrons frequent the park. The Stampede breakfast and the exciting Latino-fest are held at this plaza. If you think this park is deserted during the chilly winter months, think again. The wading pool is converted to a skating rink and people come in large numbers to enjoy skating.

Many popular events continue to be held at the Olympic Plaza on a regular basis; among them are Canada Day fireworks, New Years Eve celebrations, Pride celebrations and a public thank you rally that took place in June 2004 after the Calgary Flames reached the NHL finals.

Olympic Plaza is the epicenter of Calgary’s culture. Epcor Center of Performing Arts hosts many shows here throughout the year. On your trip to Calgary, do not miss a chance to visit this wonderful tourist attraction.
Image by Resolute on Wikimedia under Creative Commons License.
3

Ask any tourist back from Calgary and he will tell you that no matter what, one should not miss a visit to Burns Building. Located at 237-8th Avenue right across the City Hall and Olympic Plaza, this six storied edifice was constructed by Pat Burns, the meat baron, and was meant to serve as a flagship market and corporate headquarters for Burns Foods. Burns building was constructed during the historically significant year of 1913 when many prominent buildings, such as Lancaster Block, Palliser Hotel, Hudson’s Bay Store and Canada Life Building, came into existence. The building was exchanged for Glengarry Ranch by Pat Burns in 1923.

Immediately after construction, the Burns Building housed a retail meat market on the ground floor. Enter this level and you will find a dozen towering Doric marble columns that are 25 foot high each. A variety of different tenants occupied the other 35,000 square feet of office space in the Burns.

Burns Building was constructed in Edwardian Classical architectural style. You will find ornamental sculpted moldings including lion heads on the terracotta exterior. The main corridors and stairways of the building are finished with green and white Italian marble. Even back then, this structure featured conveniences such as ventilation and steam heating. Every single office had natural gas lighting apart from electricity. Pay a visit to this historically significant building on your trip to Calgary, Alberta, Canada.
Image by Peter Birkness on Wikimedia under Creative Commons License.
4

4) EPCOR Centre for the Performing Arts

Located in the Olympic Plaza cultural district, the EPCOR Center for the Performing Arts is a popular arts center in Calgary, Alberta, Canada. This center is located in Burns Building, one of the ancient surviving city blocks. This building is named after Pat Burns, a famous Calgarian.

This building was demolished in the 70s and the Calgary Center for Performing Arts was built on the land. Construction was completed and the center was officially opened in September 1985. This performing arts center was renamed EPCOR Center for the Performing Arts after it received a huge donation from a utilities company based in Edmonton called EPCOR.

A trip to Calgary is certainly incomplete without a visit to Glenbow Museum. This museum features a total of 20 galleries with 93,000 square feet of exhibition space. As this largest museum in Western Canada displays over one million objects, it is recommended to keep an entire day for your visit here. There is a permanent First Nation’s Gallery here.

You will find four permanent collections here including Ethnology, Cultural history, Mineralogy and Military history. As you browse through the collections, you will learn a lot of interesting things about Canada and its rich history.

Over 100,000 objects from all over the world are on display at the cultural history collection. Right from the 1800s, you will gain a deep insight into the life, culture and history of Western Canada.

Browse through the Glenbow ethnology collection to find at least 48,000 items that take gives you a peek into those indigenous people of North America’s Northern Plains. Glenbow Museum also features Canadian medals, decorations and orders and Japanese arms and armor. Browse through the mineralogy collection to find interesting semi-precious and precious stones as well as minerals from across the world.
Image by Thivierr on Wikimedia under Creative Commons License.
6

6) Cathedral Church of the Redeemer

Constructed in early twentieth century, Cathedral Church of the Redeemer is one of the major tourist attractions in Calgary. This building is built with rusticated sandstone and is located in downtown Calgary close to the Olympic Plaza.

The church has one and a half stories and has attractive features such as stained glass windows, red metal roof and stone walls. Many interesting landscape elements surround this charming church.

Cathedral Church of the Redeemer holds the distinction of being a standing example of Gothic Revival architecture skillfully integrated with other styles and influences. In Alberta, this church is also associated with early Anglican Church presence.

Some of the most significant elements that define the character of this church include its massing, form and size, buttresses that are non-load-bearing, usage of rusticated Paskapoo sandstone from the famed Oliver quarry, separate articulating gable roofs, gallery on the West end, lower side aisles, first metal roofing in the city, fish-scale roof cladding, heavy timber cross bracing and roof rafters and much more.

At the cathedral, you will also find the 1906 original Casavant Freres organ with refurbishments. You will certainly be impressed with the elaborate and intricate woodwork. Do not miss out the stunning oak reredos in the sanctuary.
Image by John Vetterli on Flickr under Creative Commons License.
7

Located in downtown Calgary, Alberta, Canada, Calgary Tower stands 191 meter tall. Originally known as the Husky Tower, this observation tower came into existence in 1967 as a part of the urban renewal plan. It was constructed in joint cooperation between Husky oil and

Realty Company Limited. The tower was also built to celebrate the 1967 centennial of Canada. It was in 1971 that this World Federation of Great Towers founder member was renamed Calgary Tower.

Calgary Tower was designed and constructed by W. G. Milne & A. Dale and Associates. It took fifteen months to complete building this tower at a cost of C$3.5 million. It can withstand winds up to 161 kilometers per hour and earthquakes.

On your visit to this tower, check out the column that was built in a unique manner by pouring concrete continually for 24 days. Enjoy a delicious meal at the revolving restaurant here. Called Sky 360, the restaurant offers an amazing view. +15 Skyway network connects the base of the tower to Fairmont Palliser Hotel, One Palliser Square and EnCana Place.

762 steps lead to the observation deck that is not open to public. Calgary Tower features a carillon that was presented in 1975 for the centennial celebrations by the Dutch community. Enjoy a visit to this interesting tower on your trip to Calgary.
Image by Thivierr, Qyd on Wikimedia under Creative Commons License.