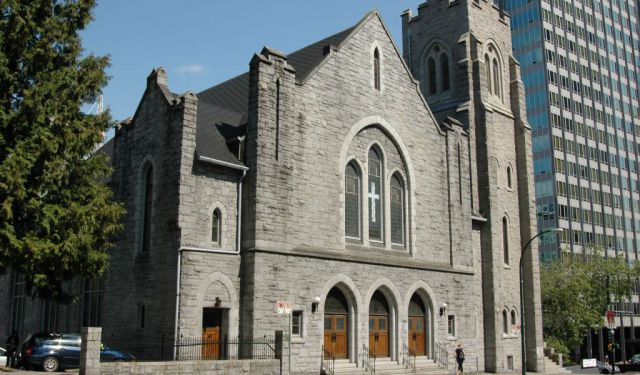 Vancouver's churches, cathedrals and chapels are as numerous as they are diverse, reflecting the nation's religious history and the cultural heritage of the city. This self-guided walking tour will take you to some of the most sacred places of worship in downtown Vancouver.
Image Courtesy of Wikimedia and Torecles.
How it works: Download the app "GPSmyCity: Walks in 1K+ Cities" from iTunes App Store or Google Play to your mobile phone or tablet. The app turns your mobile device into a personal tour guide and its built-in GPS navigation functions guide you from one tour stop to next. The app works offline, so no data plan is needed when traveling abroad.

The Holy Rosary Cathedral is a French Gothic style Catholic temple that has graced Vancouver since the turn of the 20th century. Designed by T.E. Julien, it is considered one of Vancouver's Heritage Sites. The sandstone and granite building has the shape of a cross and features some very beautiful stained glass work and hang-rung cathedral bells.

The stained glass windows are adorned with scenes from the lives of saints and Jesus, including: the Holy Family Window, displaying Jesus, Mary, Joseph, and Mary's parents, St. Joachim and St. Anne; the Baptism of the Lord Window, a 1940s design by Guido Nincheri; and the Jesus with Children window, also by Guido Nincheri.

The bells of Holy Rosary Cathedral are all rung live by bell ringers, and not played from a recording. The original bells were cast in France and shipped to Vancouver, but they weren't in tune. So, it was decided to ship the seven bells, named for the Seven Sacraments, to England to be recast and properly tuned. The result was a ring of eight bells, representing a full musical octave. The bells were finally hung for change ringing in 1906, and have remained so ever since.

Why You Should Visit:
Inspiring, located in the heart of the city, and very welcoming to travelers who want to unwind.
Not on the scale of some of the European cathedrals, but stained glass, statuary, pipe organ and full set of bells – it has it all.


Image Courtesy of Wikimedia and dronepicr.
Sight description based on Wikipedia.
2

Christ Church Cathedral is one of Vancouver's heritage sites, and is the city's very first church.

It took a rather long time to make. The basement was constructed in 1889, but the cornerstone wasn't laid until 1894. The building shows a Gothic style constructed of stone, cedar, and fir, and features several complex and beautiful stained glass windows. In 1976, the lot that the church was located on was designated to be bulldozed so as to make way for a new skyscraper complex. Fortunately, lobbying by Vancouver's people saved the historic edifice, and gave it a place on Vancouver's list of heritage sites.

Christ Church Cathedral is adorned with very distinctive heraldic symbols. Its interior and exterior feature a Celtic cross design to show the Anglican church's British roots. The church's heraldry also features a whorl and three salmon in the artistic style employed by the native Salish people, one of the original inhabitants of Canada's west coast.

In addition to its historical look and beautiful stained glass, Christ Church Cathedral is also notable for being one of the churches in Canada to sanctify same sex unions. As of 2003, it officially blesses same sex marriages.
Image Courtesy of Wikimedia and Misterpartel.
Sight description based on Wikipedia.
3

Housed in a beautiful old stone building in downtown Vancouver, First Baptist Church serves extremely diverse community, made up of children, teens, and adults, all from different social backgrounds. Its remarkable story began in a Vancouver pub – Blair’s Saloon on Abbott Street – in the year of 1886, when Vancouver had just been incorporated as a city of almost 5,000 residents. Back then, a small group of Baptists saw the increasing need to establish a place of worship for the booming city. On Sunday, June 6, they launched the inaugural Sunday School program, welcoming 30 children into the Blair’s Saloon Hall. The following Sunday, June 13, 1886, Blair’s Saloon along with most of the city were destroyed by fire.

Following the fire, two building lots were obtained from the Canadian Pacific Railway (on what is now 432 Main Street) to construct a dedicated space for worship. That modest edifice was 24 by 35 feet only and cost just $700 to build. The following March, the First Baptist Church was officially formed, but within months, the congregation outgrew the little building on Main Street. Hence a new church, seating about 800, had to be built at Hamilton and Dunsmuir Streets, which was dedicated on Sunday, September 15, 1887.

By the turn of the 20th century, the church's founders saw the importance of putting down permanent roots on the westside of Vancouver. In 1904, they bought its current lot on Burrard and Nelson Streets for $4,000. Before construction started, however, the church faced another setback: a fire erupted in the Sunday School rooms, damaging the roof and foundation.

On April 2, 1910, the cornerstone for the new church was finally laid, and on June 9, 1911, the new building was dedicated. During 1931 the sanctuary was destroyed by fire again, but was later rebuilt. The blaze broke out behind the organ, and destroyed most of the roof. For the third time, the congregation had to rebuild after a fire. Since then, the building has grown and changed along with its worshipers. It now continues to serve Vancouver from its key location on the westside and welcomes guests who genuinely want to join its holy fellowship.
Image Courtesy of Wikimedia and Torecles.
4

St. Andrew's Wesley United Church is located in Vancouver's West End. The church itself is built in a Gothic revival style, and features a tall Gothic tower, stained glass windows, a vaulted nave, a cross-like shape, and plenty of natural light. These features make St. Andrews pretty unique among churches in Vancouver- not many of them have a real cathedral appearance.

St. Andrew's Wesley United Church is the product of two separate congregations, that of St. Andrews, and that of Wesley. The congregation is part of the United Church of Canada, a union formed from Canada's Methodist, Presbyterian, Local Union, and Congregational churches. The denomination was formed in 1925, and construction on St. Andrew's Wesley United Church was completed in 1933. It has been designated as one of Canada's heritage sites, which has allowed this beautiful church to escape modern urban development on its lot, and avoid having its graceful Gothic revival style ruined by careless renovations.

Aside from its appearance, the church is also unique for having Jazz Vespers. Jazz Vespers occurs every Sunday from 4 to 5 PM, and gives visitors a chance to listen to some of Vancouver's finest jazz musicians in its stunning, Gothic atmosphere.
Image Courtesy of Wikimedia and Joe Mabel.
5

The Anglican Parish of St Paul was established in 1891 at a time when the population of Vancouver was rapidly expanding. The church was located at the centre of the geographically-defined parish, but in 1898 it was placed on skids and moved north-west, away from railway yards in Yaletown and closer to where most parishioners lived in the West End. In 1905, it was replaced by a larger church, and the old church became the parish hall.

The new church was built on the site of the old one, while the latter was relocated alongside to become the parish hall, in Gothic revival style featuring pointed-arch windows and doors, following the traditional lines of an English parish church, something that would have been familiar to most of the parishioners at the time, or to their parents.

The church pipe organ, Opus 264 by Casavant Frères of Québec, is said to be the first to be constructed west of the Rockies.
Image Courtesy of Wikimedia and Iota 9.
Sight description based on Wikipedia.