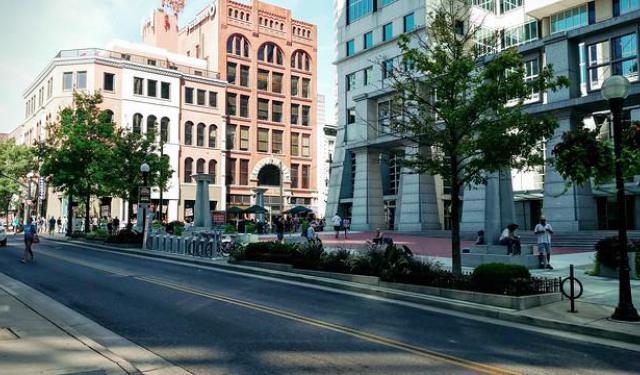 Image by Shane Raynor on Flickr under Creative Commons License.

Enjoy a good local beer at the Yazoo Brewing Company and walk down Lower Broadway to the Shelby Street Bridge. Visit the honky-tonk bars, listen to great live music on your way and watch the sunset on one of the longest pedestrian bridges in the world!
How it works: Download the app "GPSmyCity: Walks in 1K+ Cities" from iTunes App Store or Google Play to your mobile phone or tablet. The app turns your mobile device into a personal tour guide and its built-in GPS navigation functions guide you from one tour stop to next. The app works offline, so no data plan is needed when traveling abroad.

Yazoo Brewing Company, a Nashville, Tennessee brewery, was founded in 2003 by Brewmaster Linus Hall. The brewery was located in what was once the Marathon Motor Works factory building in downtown Nashville, but moved to The Gulch in March, 2010. The new brewery features an expanded taproom with 18 taps and a patio for outdoor seating.

Linus Hall and his wife Lila are both from Mississippi, and moved to Nashville in 1996. Linus had been home brewing since his college days but after years of perfecting his signature ale styles, testing them out on family and friends, he decided to open his own brewery. Hall earned his MBA from Vanderbilt University in Nashville, received a craftbrewing degree from the American Brewers Guild in California and completed an internship at the Brooklyn Brewery in Brooklyn, New York in 2001 under brewmaster Garrett Oliver. He quit a successful engineering job and with a new baby on the way, secured a location, scoured the country for brewing equipment and almost single-handedly built the brewery.

Since opening in 2003 Yazoo brews have become popular beers, favorites of local Nashvillians and sought out by craft brewing loyalists all over the world.

Image by The Peep Holes on Wikimedia under Creative Commons License.
Sight description based on wikipedia
2

The Tennessean is the prime daily newspaper in Nashville. Opened in 1907, its circulation covers about 50 counties in Tennessee and Kentucky. Many famous people have worked for The Tennessean, including former Vice President Al Gore, his wife Tipper Gore and Pulitzer Prize-winning journalist David Halberstam.
Image by EVula on Wikimedia under Creative Commons License.
3

3) Frist Center for the Visual Arts

The Frist Center for the Visual Arts is housed in what used to be the main post office designed by Marr & Holman Architects for the city of Nashville, which had been built in 1933-34 near Union Station, since most mail at that time was moved by train. As the city grew, the need for a more up-to-date main facility was obvious. When a new main post office was built in 1986, the historic old facility became a downtown branch using only a small portion of one floor.

In the early 1990s Thomas F. Frist, Jr., and his family, through the charitable Frist Foundation, took up the task of converting the old post office into an art museum. They implemented an interesting public/private venture between the Frist Foundation, the U.S. Postal Service, and the city of Nashville. The museum opened in April 2001. In 1999 the City of Nashville took ownership of the building from the U.S. Postal Service for the purpose of creating the Frist Center for the Visual Arts. A renovated post office branch was opened in the basement in 1999.

The art center consists of approximately 24,000 square feet (2,200 m2) of gallery space, used to present visual art from local, state and regional artists, as well as major U.S. and international exhibitions. As a non-collecting museum, the Frist Center does not have a permanent collection in the truest sense; rather, the museum focuses on creating exhibitions as well securing traveling exhibitions from around the country and the world.

Hume-Fogg Academic High School is a public magnet high school located in downtown Nashville, teaching grades 9-12. Hume-Fogg's original incarnation, Hume High School, which opened in 1855 on Eighth Avenue (Spruce Street) and Broad, was the first public school in Nashville. In 1875 Fogg High School became the second public school in Nashville. It was built on the same property as Hume High School, facing Broad Street. In 1912, the two merged into Hume-Fogg at the present site at 700 Broadway, a Tudor Revival building.

In the 2004–2005 school year, Hume-Fogg celebrated its sesquicentennial anniversary. It was the location for the filming of Taylor Swift's music video for the song "Teardrops on My Guitar" in 2007. In 2008 it became the second Metro school and first magnet school to have lacrosse.

This academic magnet school only offers courses in Honors and Advanced Placement (AP) with the exception of P.E. courses. Hume-Fogg is highly respected academically. Nearly 100 percent of graduates each year go on to four-year colleges, many earning prestigious academic scholarships in the process. Each year, the Hume-Fogg senior class is granted over ten million dollars in cumulative scholarship and grant money from various universities across the United States.

Lower Broadway is a street that is a focal point of Nashville.

The street runs east and west between Interstate 65 and the west bank of the Cumberland River. Its features include the Bridgestone Arena, the Nashville Convention Center and various honky tonk bars, including Robert's Western World and Tootsie's Orchid Lounge. The Ryman Auditorium and the Country Music Hall of Fame and Museum are both within one block of this street. Lower Broadway is a particularly crowded place during the annual CMA Music Festival.

Nashville Riverfront is a station on Nashville's regional rail line, the Music City Star. It currently serves as the western terminus for the line. The station is located at 108 South 1st Avenue in downtown Nashville near the Shelby Street Bridge. No parking facilities are available at the station, however, connecting bus service is provided via MTA buses. The site of the current station was originally home to a train depot built around 1902. The depot included a passenger station for the Tennessee Central Railway as well as several tracks used for freight service. Passenger service at the original station ended in 1955.

The Shelby Street Bridge (sometimes called the Shelby Avenue Bridge) is a truss bridge that spans the Cumberland River in Nashville. It was originally opened on July 5, 1909, and was reopened as a pedestrian bridge on August 3, 2003. The bridge spans 960 m (3,150 ft) and is one of the longest pedestrian bridges in the world.

The bridge was constructed at a cost of about $475,000. It was designed and construction was supervised by Howard M. Jones, the chief office engineer of the Nashville, Chattanooga and St. Louis Railway. The original architectural drawings as approved by Jones are archived at the Metro Transportation Offices. After twenty-five years of use, it became apparent that there was something wrong with the concrete on the Sparkman Street Bridge. The worn surfaces of the concrete were chipped away between 1927 and 1930 and replaced with gunite. Thirty years later, repair work had to be done again. The Standard Engineering Company of Albany, New York was hired to repair the weathered bridge. They subcontracted the steel work to the Nashville Bridge Company. In 1998 the Shelby Street Bridge was admitted to the National Register of Historic Places, due mainly to the unique truss design.

LP Field is a football stadium owned by the Metropolitan Government of Nashville and Davidson County. The stadium is the home field of the NFL's Tennessee Titans and the Tennessee State University Tigers. It is also the site of the Franklin American Mortgage Music City Bowl, a postseason college football game played each December, and is occasionally used as a venue for soccer matches. The stadium is also used for large concerts such as the CMA Music Festival nightly concerts which take place for four days every June.

LP Field is located on the east bank of the Cumberland River, directly across the river from downtown Nashville. Its seating capacity is 68,798. Its first event was a preseason game between the Titans and the Atlanta Falcons on August 27, 1999. The playing surface of LP Field is Tifsport Bermuda Sod, a natural grass. However, the relatively warm climate of Nashville, combined with the wear and tear of hosting a game nearly every weekend, usually results in a resodding of the area "between the hashes" in late November.

Due to its legendary sites, Nashville is well-known all over the world as Music City, USA. This is a tour guide of the historic places where many music hits were born, including RCA Studio B on Music Row, the Exit/In club, the Sommet Center and many others.

Nashville, Tennessee, listed among the top 10 Places to Live and Work in the U.S, is the city of epic concert venues and countless music clubs which have largely contributed to its nickname, “Music City, USA”. Adding to the city's appeal further is the number of museums, theaters, art galleries and other cultural sights. Take this orientation walk to discover some of the most popular...  view more

As a part of its great history, Tennessee is proud of its institutions of higher education for African Americans. This sightseeing tour will guide you to Nashville's famous Fisk University and its legendary Jubilee Hall, Tennessee State University and its glorious Gentry Complex. Take this tour to discover some of the most significant pages in American history.

Nashville has always been about country music. Places like the Grand Old Opry, the Ryman Auditorium, and the Country Music Hall of Fame are among the city's main landmarks. Still, other than country music, there's more to Nashville than one can imagine. Find out yourself by taking this orientation walk and explore these and other top attractions of Nashville.

Alongside different antique style buildings, Nashville's skyscrapers fit in well with the city's architectural landscape. The best evidence of this is the breathtaking view from the top floor of a skyscraper. This tour highlights some of the most interesting buildings in the city.