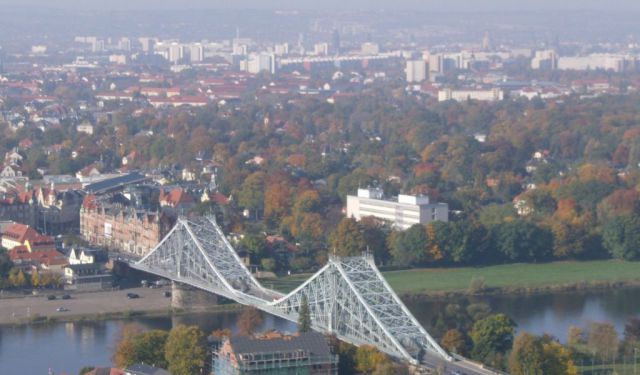 Image by Wusel007 on Wikimedia under Creative Commons License.

Elbe Valley is a very beautiful place in Dresden. There are several majestic castles set along the river in the valley. You can visit a museum, walk in the park and see impressive villas and a bridge across this river that divides Dresden. Take this self-guided tour to explore the gems of Dresden Elbe Valley.
How it works: Download the app "GPSmyCity: Walks in 1K+ Cities" from iTunes App Store or Google Play to your mobile phone or tablet. The app turns your mobile device into a personal tour guide and its built-in GPS navigation functions guide you from one tour stop to next. The app works offline, so no data plan is needed when traveling abroad.

One of the world’s oldest suspension railways, the Schwebebahn started operations in 1901. It connects the districts of Loscwitz and Oberloschwitz on the Roscwitz side of Dresden city.

The Schwebebahn was designed by engineer Eugen Langen who later deigned a similar but larger suspension railway in Wuppertal. The line is 274 meters long and is supported by 33 pillars. The system resembles that of a hanging monorail.

The Schwebeban runs on a track that is 84 meters above the ground. It has two coaches with a maximum capacity of 40 passengers per car. The cars are suspended from girders or guide rails overhead unlike other funicular railway systems that run on tracks. The vehicle is powered by electricity. Unlike the Wuppertal suspension railway, the Dresden version is a mountain railway or Bergbahn that runs up a steep mountainside. There is a an elevation difference of 84.2 meters between the lower and upper stations. The Schwebeban was one of the few Dresden monuments that survived the bombings of World War II intact. Service was suspended from 1984 to 1992 to carry out extensive repair work. A recent addition is a lookout point in the Schwebebahn station.

Visitors get a spectacular view of the River Elbe, the city of Dresden, the Saxon part of Switzerland and the Ore Mountains. A combined ticket offers travelers a round trip ride, a visit to the engine room, a drink and a postcard.

Image by DJane88 on Flickr under Creative Commons License.
Sight description based on wikipedia
2

The Loschwitz Church is a Baroque church in Dresden's Loschwitz. It was the first church designed by the architect of the famous Frauenkirche of Dresden, George Bähr. The Loschwitz Church and its churchyard are listed as part of the cultural landscape of Dresden Elbe Valley and the UNESCO World Heritage Site.
Image by Masur on Wikimedia under Creative Commons License.
3

Loschwitzer Kunststube is a very interesting art shop. There are many beautiful items, namely postcards and wonderful souvenirs of Dresden. These souvenirs are unique traditional wood carvings of different sizes and shapes. Everything here comes in small quantities at a rather high price.

Leonhardi Museum is named after the founder of the museum, the Romantic landscape painter Edward Leonhardi (1828-1905). The building of the museum is a former water mill set in the Elbe Valley, where one can find an extensive collection of Leonhardi's paintings. In one of the museum gardens, there is a memorial to Ludwig Richter, who played an important role in the life and creation of Leonhardi.

When this cantilever truss bridge over the River Elbe was completed in 1893, it was considered an engineering masterpiece. It was the longest bridge at the time, made completely of iron, that had no river piers supporting it.

The Blaues Wunder Bridge is the popular name for the bridge called Loschwitz Bridge. The bridge connects the Loschwitz and Blazewitz districts of Dresden. When it was built, the two districts were the most affluent in the city. At first it was called Konig Albert Brucke in honor of King Albert of Saxony. The blue comes from the color of the bridge. According to legend, the structure was first painted green but turned blue because of a trick of sunlight. The bridge miraculously survived the ravages of the World Wars.

Blaues Wunder was designed by engineers Claus Koepcke and H.M. Kruger. It spans 280 meters long and weighs 3500 tons. The old padlocks are still preserved on the railings. Historically, a toll was charged to cross the bridge. In 1923, the toll was renounced when the country reeled under severe hyperinflation. Today, a drive across the bridge offers spectacular views of the River Elbe and the Elbe valley.
Image by Nikater on Wikimedia under Creative Commons License.
Sight description based on wikipedia
6

The Schloss Eckberg is one of the three palaces that flank the right bank of the River Elbe. The three buildings belonged to some of the richest entrepreneurs who lived in the city. The castle is now a well known hotel.

The Schloss Eckberg was designed by Dresden architect, Christian Freidrich Arnold, and built on a cliff overlooking the River Elbe. It is popularly called Manufacturer’s Villa. The Tudor style structure was built between 1859 and 1861. The building was originally constructed as the home of wealthy Dresden wholesale merchant, Jean Daniel Souchay. The most famous resident of Schloss Eckberg was Ottomar Heinsius von Mayenburg, a pharmacist and millionaire who made a fortune manufacturing the Chlorodont Toothpaste. In 1926, Von Mayenburg’s brother, architect Georg Hensius von Mayenburg, made extensive renovations to the building.

Schloss Eckberg was taken over by the Munich Argenta hotel group in 1994. The interiors were given a makeover by Italian interior designer, Danilo Silvestrin. The hotel has 17 rooms that preserve a castle atmosphere yet have all the modern comforts for the convenience of the guests. Both restaurants offer views of the River Elbe, Dresden’s old Town and the Saxon part of Switzerland.
Image by Kolossos on Wikimedia under Creative Commons License.
7

Lingnerschloss is a unique monument that represents late classical architecture. In this majestic palace, there is a beautiful café where you can sit and contemplate the picturesque views of Elbe Valley. There is also a ballroom at the castle and soon there will be an exhibition room.
Image by Wiprecht on Wikimedia under Creative Commons License.
8

Located in the once affluent Loschwitz district of Dresden is this large neoclassical structure called Schloss Albrechtsberg. The building was at first a British manor house that was later turned into the castle for the residence of Prince Albert, the younger brother of the Prussian King, Frederick William IV.

The 7th Earl of Findlater, James Ogilvy, who owned vineyards at the location of Schloss Albretsberg, built a manor house as his residence overlooking the River Elbe. He died before the house was complete. Johann Gabriel Krebs bought the house and turned it into a restaurant that had many famous customers like composer Richard Wagner and architect Gottfried Semper. Prince Albert of Prussia chose the manor for his residence when he was forced to leave Prussia for marrying a lady of lower rank. Adolf Lohse designed the castle and the grounds were landscaped by Prussian architect, Eduard Niede. The castle escaped damage during the 1945 Dresden bombing. It was put to various uses during the communist regime.

In 1977, Schloss Albretsberg was declared a national monument and efforts were made to restore it to its former glory. Today the castle is a hotel and private catering school. The ten halls and saloons and the grounds are rented out for private and business events.
Image by Dresden Future Forum on Flickr under Creative Commons License.