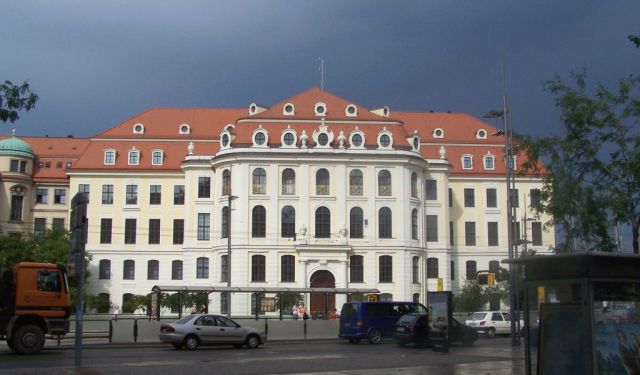 Image by X-Weinzar on Wikimedia under Creative Commons License.

The city of Dresden in Germany is a gem that boasts a long history. Kings of Saxony lived there and made brought to this city a cultural and artistic splendor, with numerous amazing museums housed in majestic palaces that are masterpieces of architecture. Take this self-guided tour to visit the most popular and famous museums in Dresden.
How it works: Download the app "GPSmyCity: Walks in 1K+ Cities" from iTunes App Store or Google Play to your mobile phone or tablet. The app turns your mobile device into a personal tour guide and its built-in GPS navigation functions guide you from one tour stop to next. The app works offline, so no data plan is needed when traveling abroad.

This unique museum is not about cleanliness products as the name may suggest, but about the human body, its functions and how to stay healthy. The museum opened its doors to the public in 1930 and has remained popular among adult and children visitors since.

The German Hygiene Museum was the brain child of entrepreneur, Karl August Lingner, a Dresden based manufacturer of hygiene products, notably the Odol mouthwash. He established a public venue for healthcare education after the 1911 International Hygiene Exhibition was held in Dresden. The present building was constructed by Wilhelm Kreis as the venue for the 2nd International Hygiene Exhibition. During the Nazi era, the museum became an avenue for the propaganda of racial ideology and eugenic research. Large parts of the building were destroyed in 1945 during the WWII bombings. The government of GDR revived the museum as a center for public health information.

The Hygiene museum has over 45,000 exhibits promoting body awareness and living a healthy life. A well known object is the transparent model of a human being showing all the organs functioning inside. There are interesting interactive exhibits and games for visitors to play. The museum is also the venue of debates, discussions and concerts.


Image by Allie_Caulfield on Flickr under Creative Commons License.
2

The Dresden city museum located in a historic building called the Landhaus traces the 800 year history of the city. There are over 1000 exhibits relating to the history and growth of Dresden including interactive attractions.

The court master builder Friedrich August Krubsacius drew up plans for the Landhaus and it was constructed between 1770 and 1775. A combination of architectural styles were used, including classicist, baroque and rococo with unique staircases and a grand ballroom. Four halls of the grand building house the museum exhibits. The Landhaus was once the government headquarters in Dresden. The building was destroyed during the World War II bombings and later restored. The present structure is less than 50 years old.

Objects of interest at the museum include a large topographic model of the city of Dresden and artifacts relating to the firebombing campaign that occurred at the end of the Second World War. Part of the building is an art gallery with paintings by well known Dresden artists, including a restored painting ‘The Ten Commandments’ by Hans the Painter created before the reformation.

The Museum of Dresden Fortress, called Museum Festung Dresden in German, opened in 1992. The entrance to the museum is located in the Virgin's Bastion at the Georg-Treu-Platz. The museum with its dark vault contrasts with the baroque buildings around it. Here you will learn about the history of Dresden Fortress. You can also walk through the last remaining gate of Dresden.
Image by www.7sky.de on Flickr under Creative Commons License.
4

The Dresden Transport museum is aptly housed in the former stables of the electors of Saxony. All types of vehicles except spacecraft are stored and displayed here.

The Dresden Transport Museum lies within the Johanneum, a large renaissance building in Dresden’s old town that was once the royal stables. The Johanneum was used as an art gallery, porcelain museum and as an armory after it ceased to be the royal stable. On the 1st of May 1952, the High School of Transport and the Ministry of Transport decided to establish a museum to store the remains of the Saxon Railway Museum that was damaged in World War II. The damaged Johanneum was renovated with a new façade and the museum opened its doors in 1968. The roof was made of Duraluminum, the metal used for aircraft hangars.

The museum is a repository of all types of transport vehicles, from horse carriages to airplanes. There is a special section showing Germany’s contribution to the world of aviation, shipping, railways and public transport. Special simulators allow visitors to land an airplane or pilot a barge. A children’s section allows kids to run the toy train and play with other toys.

The Museum of Saxon Folk Art forms part of the Jagerhof, the oldest surviving building in Dresden. The museum was the first to showcase local arts and crafts in Germany and opened its doors to the public in 1913.

The Museum of Folk art is located in the Jagerhof, a former hunting lodge of the Electors of Saxony. The three floor building, constructed in 1568, is unique because the architectural style is reminiscent of structures in Dresden before the influence of Baroque design. The 1615 console on the South Gable still bears the coat of arms of the Electors of Saxony. The upper floors were completely destroyed in the 1945 World War II air raids. The structure was the first in Dresden to be restored between 1950 and 1952.

The exhibits at the museum focus on the culture and way of life of the Saxon people from the 16th century till today. It plays a significant role in preserving regional handicrafts including costumes, household furniture, tools, dishes, implements, ceramics and painted Easter eggs among other everyday objects. There is a special section with Christmas decorations from the Erzgebirge (Ore Mountain) region including pyramids, nutcrackers and animated models.

In 2005, the top floor of the museum became the repository of the largest puppet theater collection in the world with 50,000 exhibits ranging from 200 year old marionettes and hand puppets used in local puppet shows, Bauhaus theater puppets to modern figurative puppets.

The Erich Kastner Museum is dedicated to the works of the children’s author, Nazi critic and pacifist, Erich Kastner who was born and raised in Dresden. The building that was his home from 1899 to 1917 houses this repository of his works and exhibits showcasing his life.

“Yes believe me, Dresden was a beautiful city. You have to believe me, for not one of you, even if your father were ever so rich, can go there by train to see if I am right. The city of Dresden is no more,” wrote Erich Kastner after the fire bombings in 1945 ravaged the city in his autobiographical book, “when I was a little boy.” In 2004, the people of Dresden paid a tribute to Kastner through this museum.

The Erich Kastner museum is regarded as the only mobile interactive micro-museum in the world. The interiors designed by Ruairi O’ Brien, are an example of a layout that makes optimal use of space. Exhibits are placed in drawers that form part of columns. The columns can be pushed together to make additional space for more exhibits in the unique interior design of the museum.

The Erich Kastner museum stays open from Sunday to Wednesday and on Fridays. On Thursdays, only schools and groups are allowed. Proceeds from purchases made from the online shop go to support the maintenance of the museum.

Operation hours: Monday - Sunday: 10 am – 6 pm; closed on Thursdays and Saturdays.
Image by martinroell on Flickr under Creative Commons License.