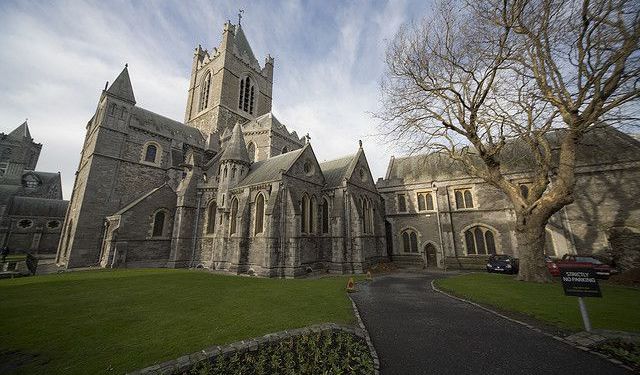 This tour will give you a glimpse of Dublin's religious life. There are many churches located in the old town of Dublin, a place unaffected by the city’s radical modernization of the 1960s. They are the guardians of Dublin’s spiritual side as well as architectural history. Take this tour to familiarize yourself with some of the city’s most holy places.
How it works: Download the app "GPSmyCity: Walks in 1K+ Cities" from iTunes App Store or Google Play to your mobile phone or tablet. The app turns your mobile device into a personal tour guide and its built-in GPS navigation functions guide you from one tour stop to next. The app works offline, so no data plan is needed when traveling abroad.

St Patrick’s Cathedral is the largest church in Ireland and one of the oldest. According to legend, the first church was built in the 5th century on the site where Saint Patrick used the water from a well to baptize the people converted to Christianity. The well became known as the Holy Well and the wooden church was built beside it.

In 1192 it was elevated to the status of cathedral, which was unusual as the growing city already had one – Christ Church. The present church was built between 1199 and 1270 and has a 43 meter-high spire.

Between 1783 and 1871 the cathedral was used as a chapel by the Knights of Saint Patrick, a part of the Order of Saint Patrick, and you can see their heraldic banners hanging above the choir stalls. The church is filled with busts, monuments and memorial plaques.

One curiosity is the “Door of Reconciliation”. The story about the door is based more on legend than fact; in 1492 Thomas Butler, 7th Earl of Osmond and Gerald Fitzgerald, 8th Earl of Kildare waged war on each other. The Earl of Ormond hid in the cathedral’s Chapter House and the Earl of Kildare had his men cut a hole in the door, through which he put his hand in a gesture of peace.

In the cathedral shop, you can buy CDs recorded by the choir and the organists, books, traditional Irish souvenirs and very pretty silver jewelry.

Why You Should Visit:
A sight to behold; more of a historical place and not so much a 'worshiping' cathedral.
Tours are run by volunteers, run for about 45 minutes to an hour and carry no extra cost.
There is also a very pretty park (church grounds) next door, that is open to the public.

Tip:
Make sure you check online for any scheduled events before you visit.


Image by Tristan Reville on Flickr under Creative Commons License.
Sight description based on wikipedia
2

While you are in Dublin you really should visit the Christ Church Cathedral which is the oldest medieval church in the city.

In the early 11th century the Norse-Gael King, Sitric Silkenbeard, went on a pilgrimage to Rome and on his return he founded the cathedral overlooking the Viking settlement in Wood Quay. The first building was wooden and was rebuilt in stone in 1180. An extra nave and the Chapel of Saint Laurence O’Toole where added in the 13th century.

The church is somewhat unique in the fact that it is the seat of both the Roman Catholic Archbishop of Ireland and the Anglican Church of Ireland. While the cathedral remains in the church, the Archbishop uses St Mary’s Church and the cathedral is managed by the dean and chapter.

The crypt dates back to 1172 and is the largest in Ireland. It is also the earliest surviving structure in Dublin. It houses the oldest secular carvings and carved statues in the country. There is a 17th-century tabernacle and candelabras and you can see 17th-century stocks that were once set up beside the church doors to publicly punish offenders. An unusual display in the crypt is the mummified remains of a cat and a rat found trapped behind the organ.

In the crypt, you can watch a short video on the history of the cathedral and visit the cathedral shop where you will find souvenirs and documents about the beginning of Christianity in Ireland. The cathedral cafe is also to be found in the crypt; it serves sandwiches, a variety of cakes and scones and cream, as well as tea and coffee.

At the west end of the building, an ancient stone bridge leads to the former synod hall, which today is home to the Dublinia Exhibition of Medieval Dublin. The cathedral has 19 ringing bells; bell ringing is carried out by the Master of the Tower and the Ringing Master.

Why You Should Visit:
The crypt is outstanding and incredible, the belfry offers amazing views, the stories by the guides are excellent, and the architecture of the building is an art in itself!

Tip:
They have lovely lunchtime and evening concerts here if you're lucky enough to catch one.

At the first sight, it is difficult to tell that this old church is now the Tourist Office It was originally built as St. Andrews Church on the remains of a much older church. The building went trough many changes but still retains the look of the church.
Image by bjaglin on Flickr under Creative Commons License.
4

St. Mark's Church is a former Church of Ireland parish church in Dublin, now a Pentecostal church. It is located in Mark St., off Pearse Street, to the east of Trinity College. The church is a large building surrounded by a grassy churchyard, and was erected in the 1750s off what was then Great Brunswick St. (now Pearse St.). It was consecrated by the Church of Ireland Archbishop of Dublin, Charles Cobb, on St Mark’s day (25th of April) 1757. In 1971 St Mark’s closed and its contents were largely distributed throughout the Church of Ireland and the parish records were transferred to the Representative Church Body. After its closure the building was purchased by Trinity College, Dublin who used it occasionally for exams and lectures. It was purchased by the Family Worship Centre, a Pentecostal assembly, in 1987, renovated, and re-opened as a place of worship.
Image by St. Mark's Church under Creative Commons License.
Sight description based on wikipedia
5

Although the Church of Saint Andrew on Westland Row is a relatively “new” church compared with some of the older churches, it nevertheless played a part in the history of Dublin’s Catholics.

This lovely church was built between 1832 and 1837 by John Bolger to a Classical Roman Baroque style preferred by Catholics to the Gothic Brava style favored by other churches. It has a Doric portico with two columns. On the roof you will see the statue of Saint Andrew, sculpted by Edward Smith. It has an octagonal bell tower with a green copper cover.

The interior of the church is beautiful, with its clear walls and white relief work. The central domed ceiling is delicately painted in peach and terracotta. The organ in the gallery over the entrance was built in 1872 by John White. On the wall in the South Transept is a painting of the Martyrdom of Thomas Beckett.

In 1603, the Penal Laws came into practice in Ireland and until they were revoked in 1829, Catholics were not allowed to worship in public. They had to make to with chapels of fortune and in 1832 while the congregation was gathered in one such chapel in Townsend Street, the chimney stack from a neighboring house fell through the roof, killing and injuring several people.

This tragedy caused enormous sympathy among the non-Catholic population and because the Penal Days were over, the City Council allowed the Catholics to build a proper church. Plans to build it on Townsend Street were abandoned when the land on Westland Row was offered to them.

The Feast of Saint Andrew is held here every year on the 4th December. It consists of a special Mass, followed by a very good lunch and then a raffle is held.
Image by DubhEire on Wikimedia under Creative Commons License.
Sight description based on wikipedia

After the 1950s, Dublin went through a series of reconstruction and remodeling. Old buildings were taken down to make way for modern architecture. Despite the trend, the Old City area was preserved to keep the cultural legacy of Ireland’s history alive. Take this amazing tour to discover some of the most important venues in the Old City of Dublin.

Check out this unique tour to learn about the lives of famous Irish writers, such as Oscar Wilde and James Joyce. You will visit places from their daily life, as well as monuments, museums, a birth place, and even a final resting place. Follow this tour and learn more about Dublin’s literary background.

Dubliners and the Irish in general are known for their passion for whiskey and beer. The Irish and the Scots are constantly at odds as to who makes the better whiskey and who could imagine St. Patrick's day without some famous Irish green beer ? Follow this self guided tour through an area packed with pubs and find out first hand what an Irish pub crawl means.

A Walk along Liffey River

Take a walk among the places where Irish history was made and is kept alive for the generations to come. This part of town is a place where the past meets the present and the future is defined. There is no better place in Ireland for a tourist to learn more about Irish culture and its rich, colorful history. Don't hesitate to spend a few hours exploring the banks of Liffey River in the...  view more