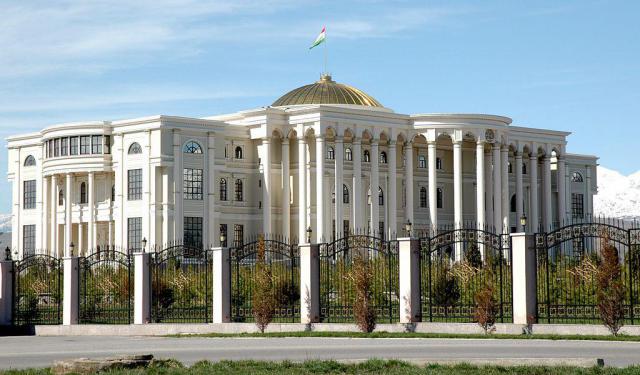 Image by VargaA on Wikimedia under Creative Commons License.

Relatively small in size, the city of Dushanbe, capital of Tajikistan, sits on the banks of the Varzob River and contains a number of notable sights, significant in terms of national history and culture. Among the local landmarks featured here are the Presidential Palace, Haji Yakoub Mosque, Komsomolskoe Lake, and more. To explore these and other attractions of Dushanbe in more detail, follow this orientation walk.
How it works: Download the app "GPSmyCity: Walks in 1K+ Cities" from iTunes App Store or Google Play to your mobile phone or tablet. The app turns your mobile device into a personal tour guide and its built-in GPS navigation functions guide you from one tour stop to next. The app works offline, so no data plan is needed when traveling abroad.

This theater is also called "Lukhtak" and was opened by Zafar Javadov in 1985. This is one of the most preferred places for Dushanbe citizens and tourists. Funny and interesting performances both for kids and adults are waiting for you! Tajik artists do their best to make every performance look amazing and memorable. The building itself is very beautiful; it was made of different colourful bricks and together they depict people dancing and having fun. This place is worth the visit!
Image by Sven Dirks on Wikimedia under Creative Commons License.
2

This theater was founded in 1937. It was opened in 1940 and was called the Mayakovsky Drama Theater. Different artists from the USSR used to come and give performances; even during war the theater didn't cease to work. After the hard times were over, the theater developed and became quite famous. Its repertoire is very variable, from classical to modern dramatic art. It gives about 400 performances a year and is in great demand.
Image by dmealiffe on Flickr under Creative Commons License.
3

Presidential Palace is a place where President of Tajikistan, Emomali Rahmonov sometimes has meetings or brings the summit. This building was built in the 40s and is a classic example of Stalinist administrative architecture. This place is very important to the country, because all the main events and meetings are held there. Questions about future life, politics and economics are solved there. The building is tall and of a light brown colour, which gives it more authority. It is landscaped with fountains and gardens.
Image by Brian Harrington Spier on Flickr under Creative Commons License.
4

4) Tajik Academic Theatre of A. Lahuti

This theater was founded in 1929 and is one of several buildings in Dushanbe that retains prominent early Stalinist architecture. The plays in the theatre run both in the Tajik and Russian languages, depended on the days. Lahuti was a writer, a poet and a very artful man who contributed greatly to cultural development in Tajik. This theater has a wonderful talented team of 55 artists. All of them have been honoured with prestigious awards from the USSR. This theater is a hot cultural spot in Dushanbe, and one where you can watch beautiful performances and plays by very talented artists both from Tajikistan and from many other corners of the world.
Image by Peter Sugden on Flickr under Creative Commons License.
5

The Palace of Unity, also referred to as Vahdat Palace, is a building in Dushanbe located in the northern part of Dushanbe's main thoroughfare, Rudaki Avenue, near Hotel Avesto and the embassy of Uzbekistan, it is the headquarters of the ruling People's Democratic Party and is also used to host international conferences.

In November 2007, a bomb was left in a plastic bag near a wall outside of the Palace, in an incident labelled by authorities as a terrorist act. A seventy-seven year old man, variously reported to be a janitor, a street sweeper, or a security guard, was the only victim; he was killed at 8:10 AM on 14 November 2007 when he picked up the plastic bag in which the bomb was contained, causing it to explode. The explosion also blew out many windows at the palace.

Image by Beao on Wikimedia under Creative Commons License.
Sight description based on wikipedia
6

This Mosque is one of the features of Islam in Dushanbe. It was created 200 years ago. It is quite big and can hold three thousand people. The building is very beautiful and its walls are decorated with colourful tiles. The mosque has a very tall crescent-topped minaret and the top of the dome is golden. Haji Yakoub was a religious man who was quite serious and well-known in Tajikistan.
Image by Brian Harrington Spier on Flickr under Creative Commons License.
7

Writers' Union Building is an amazing architectural creation. It looks like a giant wall with many Persian writers and poets standing on pedestals. There are statues of such famous artists as Sadruddin Ayni and Firdausi as well as other people who did a lot for Tajik literature development. This wall is like a memorial to those people who loved and enriched Tajik culture.
Image by Brian Harrington Spier on Flickr under Creative Commons License.
8

The Amphitheater is one of the main places where cultural and musical events are held. It was built to honour the 80th anniversary in 2004. It has about 1500 seats and can hold about two thousand people! The building is very interesting. It is round in shape and has a lot of arched windows, that bring considerable light into the hall. A big, comfortable stage allows the artists to deliver beautiful performances.
Image by KRO-Media on Flickr under Creative Commons License.
9

This lake is a favourite for all the people of Dushanbe and for the tourists as well. Here you can bathe, have fun or catch sun rays and sleep in the shadows of the big green trees. Komsomolskoe lake is an artificial lake in the center of the city, where people can come and rest. This lake has the river Dushanbinka as its source and it adds a very picturesque touch to the city. People love this lake because it is clean and comfortable for both young girls and boys and older generations as well.
Image by Brian Harrington Spier on Flickr under Creative Commons License.

Relatively small in size, the city of Dushanbe, capital of Tajikistan, sits on the banks of the Varzob River and contains a number of notable sights, significant in terms of national history and culture. The most prominent local landmarks include Rudaki Park, bearing the name of the Tajik poetry classic; the Ismoili Somoni statue and gilded arch; the National Museum of Tajikistan; and more. To...  view more