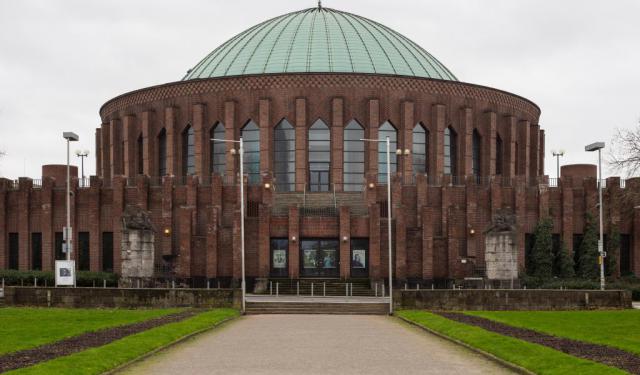 Image by Christian A. Schröder on Wikimedia under Creative Commons License.

Dusseldorf is one of the best destinations that boasts a great collection of unique and majestic landmarks built by famous architects. If you are interested in finding out more about the best landmarks in Dusseldorf, this self-walking tour will be useful.
How it works: Download the app "GPSmyCity: Walks in 1K+ Cities" from iTunes App Store or Google Play to your mobile phone or tablet. The app turns your mobile device into a personal tour guide and its built-in GPS navigation functions guide you from one tour stop to next. The app works offline, so no data plan is needed when traveling abroad.

Kaiser Wilhelm Denkmal is a monument located in Düsseldorf; it was built in memory of Wilhelm I, also known as Wilhelm the Great. He was the first German Emperor between 1871 and 1888. Under his government, Prussia was united with Germany and he was then established as the German Emperor. In 1814, the king was involved in Napoleonic Wars and thanks to his diplomat skills, his country was internationally renowned. In 1848, Wilhelm successfully avoided many local revolts that were initiated by his elder brother.
Image by Johann H. Addicks - addicks@gmx.net on Wikimedia under Creative Commons License.
2

Tritonenbrunnen is yet another fountain in Düsseldorf. This gorgeous piece of art represents the magnificent Tritons statue that is surrounded by water on the very top of Kö-Graben. The statue itself reveals The Greek sea god in a fight with a gigantic fish. Near the fountain there is a small bay with a stone bench, which gives a great overview of this fountain.
Image by Janericloebe on Wikimedia under Creative Commons License.
3

Peter von Cornelius Denkmal is a monument carved in the memory of Peter von Cornelius who was a famous German painter. From an early age, this artist learned mural painting and created some famous works. He is the author of numerous pen-and-ink paintings for Goethe's Faust. The most popular themes in his drawings were philosophical or religious. Unfortunately, during the Second World War, many of his works were destroyed, the only surviving ones being those created in Munich.
Image by cyan1975 on Flickr under Creative Commons License.
4

It was named after Wilhelm Marx, who was mayor of Düsseldorf in the early 20th century and started a programme for the modernisation of the city in that time. Wilhelm Marx House was previously home of the Düsseldorf Stock Exchange and presently includes a theatre, called "JuTA" ("Junges Theater in der Altstadt", or "Young Theatre in the Old Town").

Image by Thomas Mielke on Wikimedia under Creative Commons License.
Sight description based on wikipedia
5

Jan Wellem Reiterstandbild, also known as “'The Rider”, is the oldest statue in Düsseldorf and its fame is due to it being one of the most relevant Baroque statues in Europe. The statue was created in 1711 by sculptor Gabriel de Grupello. Prince Jan Wellem himself was an excellent diplomat and under his leadership, Düsseldorf’s underwent impressive growth. During his government, many fascinating buildings were built, which survived the Second World War and managed to keep their initial appearance.
Image by Alexej Potupin on Wikimedia under Creative Commons License.
6

Statue of Mariensaule is a column with the Virgin Mary statue, found in the heart of the antique district of Dusseldorf. Statue of Mariensaule, also known as Statue of Our Lady, represents the one and only amazing religious monument which survived in Dusseldorf in the Second World War. The statue was carved in 1854 by sculptor Gottfried Renn and it aimed to reveal the celebration of the Immaculate Conception.
Image by cyan1975 on Flickr under Creative Commons License.
7

Basically, Kunst im Tunnel is a modern art museum in Düsseldorf but at the same time, it might be considered one of its best landmarks thanks to its unique construction. It features an underground exhibition area of more than 850 meters. The entrance area represents a glazed pavilion placed right in front of Rhine. Over the years, this place had few functions, as at the beginning it was simply a “Rhine promenade project”, but founders later realized that the best usage for it was as an exhibition area for contemporary art.

Image by Till Niermann on Wikimedia under Creative Commons License.
8

Rheinkniebrücke is one of the most beautiful bridges in Düsseldorf and it connects the central part of the city to Oberkassel, another Düsseldorf district. The idea of building a bridge that would unite 2 parts of the city was projected in 1962, and in 1965, the construction began. The total length of the bridge is approximately 1519 meters.
Image by Mbdortmund on Wikimedia under Creative Commons License.
9

The Rheinturm is a 240.5 metre high concrete telecommunications tower in Düsseldorf. Construction commenced in 1979 and finished in 1981. The Rheinturm carries aerials for directional radio, FM and TV transmitters. It stands 174.5 metres high and houses a revolving restaurant and an observation deck at a height of 170 metres. It is the tallest building in Düsseldorf.

The Rheinturm was inaugurated on 1 December 1981. It contains 7,500 cubic metres of concrete and weighs 22,500 tons. Before October 15, 2004, when an aerial antenna for DVB-T was mounted, it was 234.2 metres high. The observation deck is open to public, daily from 10:00 to 23:30. As a special attraction, there is a light sculpture on its shaft which works as a clock. This sculpture was designed by Horst H. Baumann and is called Lichtzeitpegel (light time level). The light sculpture on the Rheinturm is the biggest digital clock in the world.

Image by Zoberclak on Wikimedia under Creative Commons License.
Sight description based on wikipedia