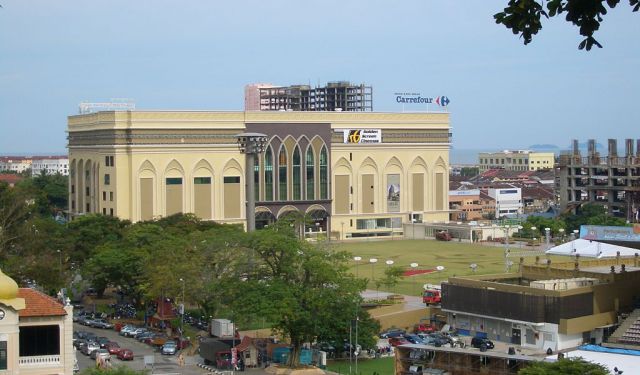 The eastern part of Melaka is home to the beautiful Shree Ambaji Temple, the impressive Hwa Kor San Temple, the historic St. John's Fort, and the fascinating Bird Sanctuary. Take this tour to visit the most interesting and prominent attractions in this part of the city!
How it works: Download the app "GPSmyCity: Walks in 1K+ Cities" from iTunes App Store or Google Play to your mobile phone or tablet. The app turns your mobile device into a personal tour guide and its built-in GPS navigation functions guide you from one tour stop to next. The app works offline, so no data plan is needed when traveling abroad.

In late November 2006, a structure part of the fort, believed to be the Middelsburgh Bastion was accidentally uncovered during the construction of 110 meter revolving tower in Malacca Town. Malacca Museums Corporation suspects the structure was built by the Dutch during the Dutch occupation of Malacca from 1641 to 1824.

Image by plassen on Flickr under Creative Commons License.
Sight description based on wikipedia
2

The Proclamation of Independence Memorial was built in 1912 and is located near the Historic City Memorial Garden. It where Malaysian independence was first proclaimed. It now houses a museum where you can find pictures and artifacts related to the country's struggle for independence.
Image by Rudolph.A.furtado on Wikimedia under Creative Commons License.
4

Situated on St. John's Hill, St. John's Fort is a noteworthy city attraction and a valuable historic landmark. The fort was built by the Dutch during the 18th century to guard against attack by land. In addition to the fort, you can also see an old cannon.
Image by Gisling on Wikimedia under Creative Commons License.
5

The Bird Sanctuary was opened to the public in 1991. Here you will find more 30 species of butterfly and an impressive number of reptiles. Come here to learn more about reptiles, birds and butterflies. The Melaka Bird Sanctuary is worth a visit, especially if you are traveling with kids!
Image by Parag.naik on Wikimedia under Creative Commons License.
6

The Hwa Kor San Temple is located near to the Shree Ambaji Temple (Melaka Gujarati Samaj) in the eastern part of the Malaysian capital. This religious building incorporates some beautiful Malaysian architectural elements and is a popular regional place of worship.
Image by Vmenkov on Wikimedia under Creative Commons License.
7

The Shree Ambaji Temple, or Melaka Gujarati Samaj, is located in the eastern part of Melaka on Pasar Parlameswara Street and has been in existence for about 37 years. The community of worshipers at this temple continues to grow year by year.
Image by Lim Lik Wei on Wikimedia under Creative Commons License.