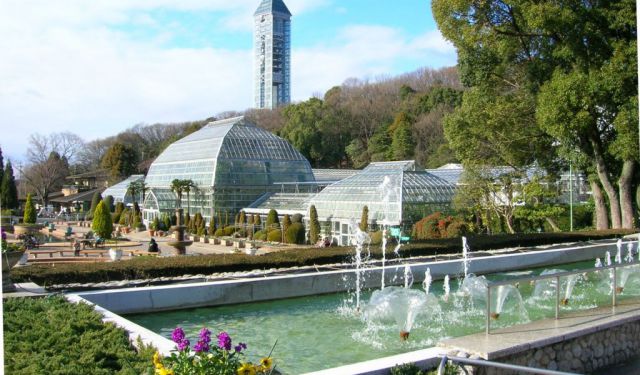 Image by KAMUI on Wikimedia under Creative Commons License.

The eastern part of Nagoya is a beautiful section of the city. Here visitors can enjoy wonderful botanical gardens and temples, plus some beautiful public parks and a zoo. It’s also a great area for entertainment, with a fun amusement park and several interesting cultural venues. Take our tour to see the top sights of East Nagoya.
How it works: Download the app "GPSmyCity: Walks in 1K+ Cities" from iTunes App Store or Google Play to your mobile phone or tablet. The app turns your mobile device into a personal tour guide and its built-in GPS navigation functions guide you from one tour stop to next. The app works offline, so no data plan is needed when traveling abroad.

The Hōsa Library is located on the compound of the Ōzone Shimoyashiki in Nagoya. It was established by Tokugawa Yoshinao, the first lord of the Owari Domain, as an official archive. It was transferred from the Tokugawa family to Nagoya City in 1950. Presently the library has about 110,000 items including classic literature. The library cooperates closely with the neighboring Tokugawa Art Museum and the Tokugawa Garden.
Image by Wdshu on Wikimedia under Creative Commons License.
Sight description based on wikipedia
2

The Tokugawa Art Museum, or Tokugawa Bijutsukan, is a private art museum, located on the former Ōzone Shimoyashiki compound in Nagoya. Its collection contains more than 12,000 items, including swords, armor, Noh costumes and masks, lacquer furniture, Chinese and Japanese ceramics, calligraphy, and paintings from the Chinese Song and Yuan dynasties (960-1368). Unlike many private museums in Japan, which are based on collections assembled in the modern era by corporations or entrepreneurs, the Tokugawa Art Museum houses the hereditary collection of the Owari branch of the Tokugawa clan, which ruled the Owari Domain in what is now Aichi Prefecture.

The museum is operated by the Tokugawa Reimeikai Foundation, which was founded in 1931 by Yoshichika Tokugawa (1886–1976), 19th head of the Owari clan, in order to preserve the clan's priceless collection of art objects, furnishings, and heirlooms.

The main building of the museum was constructed in the 1930s in a classic Japanese style with western elements. The most important and valuable treasures are three Heian period illustrated handscrolls of The Tale of Genji, dating to the 1130s. Along with one other scroll from the same set, now preserved at the Gotoh Museum, they are the earliest extant depictions of the epic tale and are National Treasures of Japan. The scrolls are so fragile that they are permanently displayed to the public. Since at least Heisei 13, they have been displayed in the Tokugawa Museum for one week in November.

Image by Gnin on Wikimedia under Creative Commons License.
Sight description based on wikipedia
3

Tokugawaen is a beautiful Japanese garden that typifies the daimyo gardens of the Edo period. Here you can admire the wonderful landscape of Japanese nature with its beautiful greenery and many different flowers.
Image by Robert Sanzalone on Flickr under Creative Commons License.
4

Nagoya Dome, constructed in 1997, is a baseball field, located in the city of Nagoya. The dome has the capacity to seat up to 38,414 people (official 40,500 people). It is an example of a geodesic dome.

It has served as HQ for the Chunichi Dragons baseball team, since its opening. It has also served baseball teams Orix Blue Wave and Kintetsu Buffaloes, sometimes during the year. Official theme song for The Nagoya Dome, "Here For You", was written by local FM radio disk jockey, James Havens, and also released on CD by Victor Entertainment.
Image by Gnsin on Wikimedia under Creative Commons License.
Sight description based on wikipedia
5

The Chikusa Park is a beautiful public park in the Chikusa-ku neighborhood. It’s a great place to come and walk along its numerous paths and avenues, which take you through a whole rainbow of beautiful Japanese plants and flowers that will soothe your mood and awaken your senses.
Image by slope_walker002 on Flickr under Creative Commons License.
6

Nittai-ji, or Kakuōzan Nittai-ji, is a Buddhist temple located in the Chikusa ward of Nagoya. It was constructed in 1904 as a repository for the ashes of the Gauthama Buddha, which were the gift of King Chulalongkorn of Thailand. Therefore it was named the "Japan-Thai Temple", which is "Nittai-ji" in Japanese. The temple's name also stand for "auspicious king" in honor of the Buddha, and "Japan-Thai" for the friendly relations between the two nations. This nonsectarian Buddhist temple has many international influences, which are reflected in its architecture.

King Bhumibol Adulyadej donated an additional Buddhist image and a tablet to the temple. Each month on the 21st day, the approaches to the temple play host to a large flea-market. The closest subway is Kakuōzan Station with the Higashiyama Line.
Image by Mercy758 on Wikimedia under Creative Commons License.
Sight description based on wikipedia
7

Tōgan-ji is a Buddhist temple of the Sōtō Zen sect located in Nagoya. Originally built in 1532 by Oda Nobuyuki in memory of his father, Oda Nobuhide, it was moved to its current location in 1714. The temple grounds have a turtle pond and a grove of giant bamboo. A 10-meter tall Buddha statue known as "The Great Buddha of Nagoya" was erected in 1987.

The temple has many links to India as one of the high priests completed his studies there. The grounds contain a lingam and a shrine dedicated to Saraswati, who is honored in a festival to Benzaiten every May 7–8. Tōgan-ji also contains a huge wood block said to purge past sins if touched with one hand.

The closest subway is Motoyama Station on the Higashiyama Subway Line and Nagoya University.
Image by Guwashi999 on Flickr under Creative Commons License.
Sight description based on wikipedia
8

The Higashiyama Zoo and Botanical Gardens is a zoo with botanical gardens located at 3-70, Higashiyama-motomachi, Chikusa-ku. Established in 1937, the Higashiyama Zoo is one of Asia's largest, containing attractions such as botanical gardens and an amusement park. Its collection contains more than 125 species of mammals, including bears, elephants, giraffes, koalas, lions, and tigers; numerous reptiles and birds; and medaka tropical fish that flew on the space shuttle with one of Japan's astronauts.

Operation hours: Tuesday to Sunday: 9 am - 4.50 pm
Image by KAMUI on Wikimedia under Creative Commons License.
Sight description based on wikipedia
9

Known locally as “the pencil tower”, the Higashiyama Sky Tower is a tall triangular edifice that dominates the local skyline. You can travel up in one of its great glass elevators to get a wonderful view of the nearby zoo and botanical gardens.
Image by emrank on Flickr under Creative Commons License.