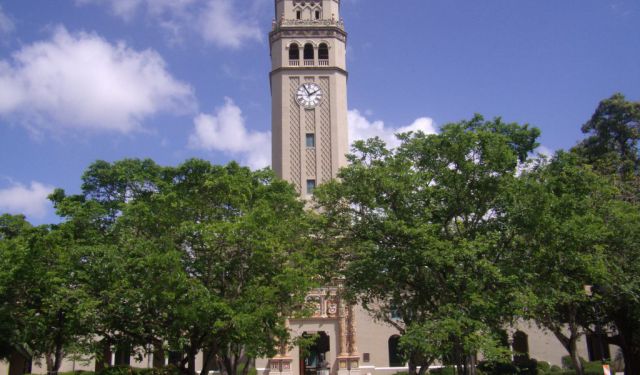 Image by Madgirl 15 on Wikimedia under Creative Commons License.

East San Juan contains many great attractions, including San Gerónimo Fort, Parque Luis Muñoz Rivera, beautiful statues and the best art galleries and museums. Take the following tour to discover the most interesting places in San Juan's east end!
How it works: Download the app "GPSmyCity: Walks in 1K+ Cities" from iTunes App Store or Google Play to your mobile phone or tablet. The app turns your mobile device into a personal tour guide and its built-in GPS navigation functions guide you from one tour stop to next. The app works offline, so no data plan is needed when traveling abroad.

The Museum of Art of Puerto Rico (MAPR) is one of the most prestigious art museums in Puerto Rico. MAPR is a 130,000-square-foot neoclassical building from the 1920s formerly known as the San Juan Municipal Hospital. It is one of the biggest museums in the Caribbean and a local house for collections from the 17th century. The new east wing, which is dominated by a five-story-tall stained-glass window, is the work of local artist Eric Tabales.

The museum is located in the heart of Santurce, steps away from the Luis A. Ferré Performing Arts Center and the Puerto Rico Museum of Contemporary Art. The historical building that houses part of the MAPR was built during the 1920s by architect William Shimmelphening. A new wing, designed by architects Otto Reyes and Luis Gutierrez in 1996, was added to the existing building to create what is now the complete structure. Museum's facilities are: top-floor gallery inspired by Oller, beautiful garden filled with a variety of native flora, 400-seat theater, massive atrium, restaurant, gift and book store, and much more.

Image by Salasdavila on Wikimedia under Creative Commons License.
Sight description based on wikipedia
2

The Luis A. Ferré Performing Arts Center, or Centro de Bellas Artes Luis A. Ferré in Spanish, is a multipurpose performance center located in the Santurce area. It contains three halls, featuring ballet, plays, operas and concerts. The Center opened on April 9, 1981 under the administration of then Governor Carlos Romero after 10 years of planning, project financing, and construction. Since then, it has become the most important performing arts venue in the Puerto Rican capital, presenting the highest level of commercial theater in Puerto Rico. It has been the focus of performing arts and cultural presentations in the island’s metropolitan area, hosting internationally renowned stars such as Plácido Domingo. It is also home to the Puerto Rico Symphony Orchestra and the annual Casals Festival. The Center is surrounded by various art expositions, including murals, paintings, and sculptures. The two largest halls feature art expositions which distinguishes each one: In the Antonio Paoli Festival Hall’s second floor, a 30-by-15-foot (9.1 by 4.6 m) mural titled La Plena by Rafael Tufiño is on display and represents twelve famous Puerto Ricans; In the René Marqués Hall, a 20-by-39-foot (6.1 by 11.9 m) stained glass exposition titled Form and Tropical Crystals by local artist Luis Hernández Cruz illuminates its lobby with 5,700 multi-colored pieces of crystal arranged to showcase themes related to the sea, the forest, the sky and the overall tropical ambiance.
Image by Ryan on Flickr under Creative Commons License.
Sight description based on wikipedia
3

The Puerto Rico Museum of Contemporary Art, often abbreviated to MAC, is a contemporary art museum, which exhibits an extensive collection of wonderful works by contemporary artists from the Caribbean and all over Latin America. The museum also has a gift shop, where you can find traditional souvenirs and crafts. The museum was founded by artists and sponsors of the civil society and was officially instituted on October 8, 1984 as a non-profit organization. After its incorporation, the Museum offered its services in public spaces like Plaza Las Américas and amongst offices of known contributors. In 1988, the University of the Sacred Heart granted the museum a provisional local free of charges at the Magdalena Sofía Barat building. After 15 years, the museum officially petitioned the government to grant them the Labra Historical Building in Santurce. On October 20, 2002, the museum and Governor Sila Calderón signed a contract granting the museum the rights for the building.

Galería Petrus is a fine art gallery located on Calle Hoare, in the Miramar district. It displays various interesting works, including artists such as Dafne Elvira, Marta Pérez and Elizam Escobar.

Fortín de San Gerónimo del Boquerón is a small fort located at the entrance of what is known today as Condado Lagoon. It was built during the 17th century to replace the smaller El Boquerón, which stood at the easternmost end of San Juan. The original Boquerón battery defended San Juan from attacks by Sir Francis Drake in 1595 and Sir George Clifford, 3rd Earl of Cumberland in 1598, who destroyed it after his attack. San Gerónimo became part of San Juan's line of defense, along with San Antonio Fort/Bridge and Escambrón Fort and Castillo de San Cristóbal. It was listed in the National Register of Historic Places on October 11, 1983. Unlike similar forts near Old San Juan, it is not part of San Juan National Historic Site. San Gerónimo is owned by the Institute of Puerto Rican Culture, but is managed by the Hilton. The hotel occasionally used it for private gatherings, but during recent times it has fallen into such disrepair that visitors are no longer allowed.
Image by Jmoliver on Wikimedia under Creative Commons License.
Sight description based on wikipedia
6

Parque Luis Muñoz Rivera, established in 1929, was the island’s first municipal park. In 1919, land was set aside to create a large recreational park for the residents of San Juan. The land once formed part of the city's "Third line of defense" built in the 18th century. The powder magazine built in 1769, “El Polvorín de San Gerónimo”, designed by military engineer Thomas O'Daly, is still located on the grounds of the park. The park was named in honor of one of the country’s most important personalities, the Puerto Rican poet, journalist and politician, Luis Muñoz Rivera. His statue stands in the center of the park, among other statues of prominent Latin American figures, numerous fountains, trees and benches. The park was designed by Bennett, Parsons & Frost of Chicago in 1925. Its construction from 1926 to 1934 was directed by William Parsons and Francisco Valines Cofresí.
Image by Frederic Gleach on Flickr under Creative Commons License.
Sight description based on wikipedia

San Juan proudly features the country’s oldest quarters and historic buildings. In addition to containing the oldest occupied residence in the Western Hemisphere, visitors can also admire the old City Hall, the Cristo Chapel, Convento de los Dominicos, historic El Arsenal and many other fascinating attractions. Take the following tour to see the most popular and famous historic buildings in San...  view more

Old San Juan is packed with historical places, among which are the city’s old squares. Many of them house beautiful fountains, prominent monuments and wonderful sculptures which depict the rich history of this amazing city. Check out San Juan’s most popular historical squares in the next self-guided tour!