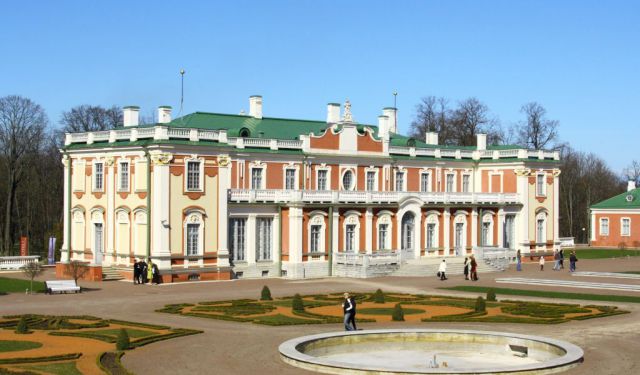 Image by Holger Vaga on Wikimedia under Creative Commons License.

East Tallinn, or Kadriorg, is located outside of Old Town and is generally referred to as a quiet district. East Tallinn offers fascinating 19th and 20th century villas, as well as Estonia’s top art museums. The eastern side of the city is also home to several art galleries, beautiful Kadrioru Park, the striking Russalka monument, as well as the magnificent Kadriorg Palace and Park.
How it works: Download the app "GPSmyCity: Walks in 1K+ Cities" from iTunes App Store or Google Play to your mobile phone or tablet. The app turns your mobile device into a personal tour guide and its built-in GPS navigation functions guide you from one tour stop to next. The app works offline, so no data plan is needed when traveling abroad.

The Eduard Vilde Museum is located on the grounds of Kadriorg Park and is dedicated to the life and works of Eduard Vilde. Mr. Vilde was born in 1865 and grew up in a rural farm setting in Estonia under the rule of Tsarist Russia. There were also large numbers of German nobility that held land that was worked by the Estonian people. These formative events are very prominent in the writings of Mr. Vilde.

Eduard left Estonia early on in life and traveled as a journalist. Working in Berlin gave him a different view of the world and he became an avid devotee to critical realism. This is strongly portrayed in his novels and writings. He was a very prolific writer and became a very strong voice against the Tsarist rule of Estonia. When Estonia gained independence in 1919 he became its ambassador in Germany.

He lived the last years of his life in the house in Kadriorg Park. The museum has a collection of his writings, and several rooms of the house have been refurbished to be reflective of how they would have looked during his life. There is a small art museum on the top floor. The museum is open Tuesday,Thursday-Saturday:11 am - 5 pm; Wednesday until 8 pm. Admission is charged.

Image by Tammerix on Wikimedia under Creative Commons License.
2

2) Kadriorg Palace and Park (must see)

Kadriog Palace and Park has a long history in Tallinn. It was commissioned by Peter the Great after he successfully brought Estonia under his domain. The Palace was to be a sea-side home for himself and his wife, Catherine I of Russia. Building of the Palace was started in July of 1718. Niccolo Michetti, the Italian architect, designed this beautiful Baroque Palace.

Although only two stories tall, it is a very grand building. Unfortunately, Peter died before the building was completed. Catherine lost all interest in the palace after the death of her husband, and never visited it, even after the palace was completed. Parts of the palace were left to fall into disrepair; however, the great hall has been lovingly preserved and restored.

The Palace has had several tenants and uses over the centuries. Almost all of the Russian ruling class has been to the palace over the years. Estonia’s President, Konstantin Päts, undertook an extensive renovation in the 1930s. It was also home to the Art Museum of Estonia until just recently. In 2000, the palace was reopened after extensive renovations and it now houses a branch of the museum. Now that the building has been restored, work is ongoing in the gardens and surrounding structures on the property.

The gardens, that have been redone, are fabulous. Kadrioru Park is a beautiful open space with a picturesque natural landscape, as well as fields and forest groves. Visitors may traverse the park through a collection of twisting paths. Kadrioru Park is also home to the symmetrical Swan Lake, one of the most popular destinations inside the open space.

There is an admission fee for the museum portion of the palace and guided tours are available in several languages for the palace. Please call at least one week ahead to schedule a tour.

Image by Eesti.pl on Flickr under Creative Commons License.
3

The Mikkel Museum is housed in the building that was once the large kitchen building of Kadriorg Palace. Johannes Mikkel was kind enough to donate his collection of art work to the Estonian Art Museum, so this special place was opened. Estonia has suffered through numerous wars and occupations in the last two centuries. Those wars taken a terrible human toll, and it has also had a negative effect on the amount of art work in the country. Collections were either moved out of harm’s way during the two World Wars or were taken. That makes this collection very special.

Works of art in this display are a broad range of paintings, wonderful porcelain objects and prints from around Europe and the Western world. The works span the 18th century to the present. Around 600 pieces of art are on display and the museum is on the Kadriorg Palace grounds. A separate ticket for just the Mikkel Museum may be purchased for 2.50€ or a ticket that includes the Palace and the museum is 4.80€. This is a must see for anyone who likes art as it is one of just a handful of really good collections in Estonia.

The Art Museum of Estonia is a very modern and absolutely beautiful facility. KUMU stands for Kunstimusseum or art museum; it houses one of the largest collections of art in Northern Europe. The artwork displayed here is absolutely fabulous and there is something for everyone. While the Art Museum of Estonia was founded in the early 20th century, its current building was not completed until 2006.

The building is 5 stories tall and the modern façade is just a vision, enhanced by the natural beauty of the surrounding Kadriorg Park. While the ground floor can be accessed from the park, the first floor is accessed from Lasnamägi parking area. The information kiosk is here, along with a restaurant, library, book store and an auditorium. The next two floors contain works of art from Estonia. Those dated before World War II are on the second floor, and the third floor is dedicated to works from post WWII period through 1991. The fifth floor houses contemporary art and includes works from artists around the world.

It is interesting to view the art from the perspective of when the artists were free citizens and when they were being oppressed. Plan on spending at least half a day at the museum and include a bit of lunch at the café. The view there is delightful. Hours fluctuate, so be sure to check the schedule. Admission is structured on whether how much of the museum you would like to see. Just the Estonian art (3&4 floors) is one price, the contemporary floor is another price or you can see the whole museum for € 5.50 for adults, €3.20 for students and seniors, and €10 for the family plan. The museum is a definite must see for art lovers visiting Tallinn.

Peter the Great House Museum is an incredible example of what preservation of history really means. This house was almost lost over the years, but fortunately it has been preserved and just recently refurbished. Here is a bit of history about the house. Emperor Peter I expanded Russia’s territory to include Estonia in 1710. Tallinn with its sea port was a very valuable asset and the Emperor visited this area frequently.

There were no suitable palaces for Peter I to stay in, so, while one was being built, this summer cottage was purchased from a local official in 1713 and slightly expanded to accommodate the Emperor and his staff. Peter I died before the palace was completed, so this cottage was his main “camp” while in Tallinn. After his death, the cottage fell into a state of disrepair, as the main seat of power moved to the palace. Fortunately, Emperor Alexander I ordered the cottage to be repaired and maintained during a visit in 1804, otherwise this cottage probably would have been lost. It is in fact, the only remaining summer cottage from that time period.

While the house is small, it is definitely worth the visit. There is a pair of boots on display that was made by Peter the Great. What an awesome relic! Admission is free with the TallinnCard, €1, 92 for adults and €0, 96 for students and seniors. There is also a stratified admission rate for families, so be sure and check this out if you are traveling with kids.

Russalka is a memorial that was dedicated in 1902 to the Rusalka, a Russian ironclad warship that sank in1893. The beautiful bronze angel at the top of the memorial was sculpted by Amandus Adamson. Mr. Adamson was an Estonian artist who was a gifted sculptor, painter and woodcarver. The inspiration for the angel is said to have been Mr. Adamson’s housekeeper Juliana Rootsi, whose grandson would become a famous politician.

The angel is holding an Orthodox cross that directs the viewer to the sea in a rough position of where the ship sank. During the Soviet occupation, the cross was removed but has since been replaced. Although the angel will draw your attention, the large impressive rock monument, she is standing on, also merits a look. On the one side it lists the names of the most senior officers aboard the ship. Another side shows that the monument was erected under the auspices of Tsar Nikolai II. The back of the monument commemorates September 7, 1893, the fateful day the ship sank, with a relief of the storm tossed ship and a solemn black wreath.

The entire statue is centered in a Mariners compass at the base. Around the compass there are two pylons that list the names of the crew that were lost. Sometimes, when visiting the area, there are flowers at the base of the statue. These are left by local couples of Russian descent that have just been married. It is a common practice to lay flowers to remember fallen heroes after the wedding ceremony.
Image by Aleksandr Abrosimov on Wikimedia under Creative Commons License.