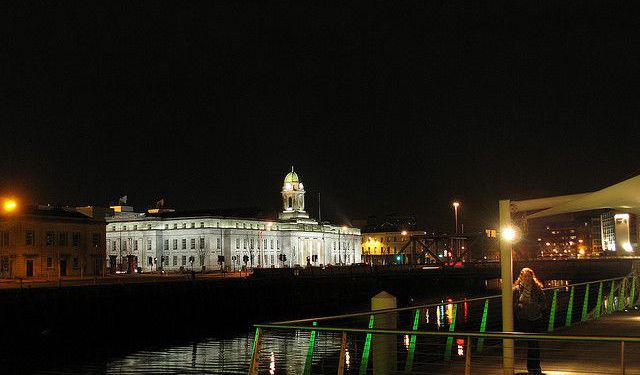 Image by Steve Montgomery on Flickr under Creative Commons License.

The Eastern Part of Cork City is characterized by a mixture of old and new. Cork is the city that aims to evolve continuously while retaining its traditions. The upper side of of the city is a quiet sleeping area that wakes up only around the St. Patrick's Day. Walking down south you will notice the picture change to a more contemporary look. The suggested tour is to help you explore the East Side of Cork.
How it works: Download the app "GPSmyCity: Walks in 1K+ Cities" from iTunes App Store or Google Play to your mobile phone or tablet. The app turns your mobile device into a personal tour guide and its built-in GPS navigation functions guide you from one tour stop to next. The app works offline, so no data plan is needed when traveling abroad.

When the roof and altar were completed for the new church in May of 1839, work began on bringing down the old chapel on Monday morning. The work was done at such a pace, that the new church was ready for the Mass on the following Sunday. Contributions towards the £3865 expenditure for the construction of the church came from businessmen, special collections held for the altar, roof etc., Sunday collections and even some Protestant people of the society. In 2009, a booklet containing fully researched history of the church was published to mark the 175th anniversary. The church is well maintained and has very slight alterations from the original construction. A visit to the church is as good as a visit to the past.

Image by cøsy on Flickr under Creative Commons License.
2

The church with the crooked spire or the Trinity Presbyterian Church is located on the Little William Street. Like many other structures in Cork, this building, too, has a unique quality that will attract you to it. Built on an elevation, this church is visible from many parts of the city. With its sleek yet antique look, this Neo-Gothic style building adds character and heritage to the city of Cork.

The church was built by 1861 under the chief guidance and design of Colin Tarring, an architect well known for his work in non-conformist Protestant churches all over the UK. Ever since then, the church has been used for worship by the congregation of Presbyterian Church.

Not only is the exterior of the church fascinating, upon entering inside, one is welcomed by three beautiful glass stained windows that represent the Holy Trinity, a gorgeous gallery and opened timbered roof structure. An organ that dates back to 1904 and the interior sans a single pillar to allow an uninterrupted view of the altar are not to be missed.

One distinct feature of the Trinity Presbyterian Church is its crooked spire. There have been a lot of stories circling around for the spire. One Such story claims that the spire was constructed crooked on purpose by the workers, after they had a spat with the architect. A weird version of the story claims that the architect hung himself at this site which has rendered the spire crooked!
Image by Brian Shelly on Flickr under Creative Commons License.
3

The current Bus Station of Cork stands on the very same spot where for decades before drivers had waited for and picked up their passengers. Nowadays the station's beautiful contemporary design attracts not only travelers, but also regular sight-seers. Behind the station there is an amazing mural drawing that outlines Cork’s landmarks in a most colorful way.
Image by jf1234 on Flickr under Creative Commons License.
4

Though the structure might have changed from the inside, the Thomas Crosbie Holdings headquarters is a must visit for its grand appeal and presence.
Image by Piotr Czarnecki on Flickr under Creative Commons License.
5