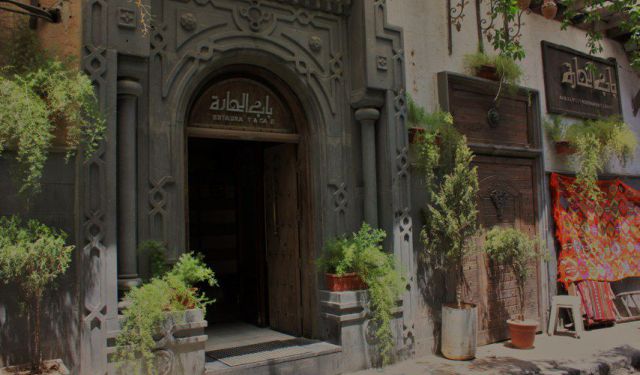 Image by Jan Smith on Flickr under Creative Commons License.

The east end of Old Damascus is home to numerous tourist attractions, including the historic Kisan Gate, the Greek Catholic Patriarchal Cathedral, the Orthodox Armenian Church and its old houses. We invite you to take the next walking tour to discover this fabulous area in Old Damascus!
How it works: Download the app "GPSmyCity: Walks in 1K+ Cities" from iTunes App Store or Google Play to your mobile phone or tablet. The app turns your mobile device into a personal tour guide and its built-in GPS navigation functions guide you from one tour stop to next. The app works offline, so no data plan is needed when traveling abroad.

Bab Kisan is one of Damascus’ seven ancient city gates. Located in the southeastern part of historic district, it was named in memory of a slave who became famous during a conquest by the Caliph Mu'awiya. The wall was built during the Roman era and was dedicated to Saturn. This gate is famous for being the escape route of St. Paul. He was lowered from a window in the wall, into a basket, and with the help of his disciples, made his escape at night and fled toward Jerusalem. Today it is the location of the Chapel of St. Paul.
Image by Heretiq on Wikimedia under Creative Commons License.
Sight description based on wikipedia
2

Within walking distance of Bab Kisan, you will find the Greek Catholic Patriarchal Cathedral. This beautiful religious building features several small fountains in its courtyard, a beautiful clock tower and a fine interior.
Image by Ron Roberson on Flickr under Creative Commons License.
3

The Orthodox Armenian Church is located close to the Eastern Gate, the ancient Bab ash-Sharqi. This religious building features a dome, stone walls and marvelous icons inside.
Image by Aziz1005 on Wikimedia under Creative Commons License.
4

Old Damascus is well-known for its outstanding historic houses and ancient buildings. One of them is Qasr Naasan. It is an excellent example of Old Damascus architecture, featuring magnificent columns, a beautiful courtyard and a fabulous exterior.
Image by themis.ontheroad on Flickr under Creative Commons License.
5

5) Chapel of Ananias (must see)

The Chapel of Saint Ananias is the ancient house of Saint Ananias, in the old Christian quarter of Damascus. It is believed to be the house where Ananias baptized Saul (who became Paul the Apostle). Located near Bab Sharqi (Eastern Gate), five meters below ground, the church was supposedly the cellar of the House of Ananias, but more likely it was built at the level of the Roman street. The church, which has been restored many times, is the only church from the first century to survive in the city. A simple structure consisting of two small rooms with bare stone walls, it houses an altar, some icons and a few pews. The icons tell the story of Paul’s conversion. It represents the simplicity of the early Christians and services are still held to this day.
Image by Heretiq on Wikimedia under Creative Commons License.
Sight description based on wikipedia
6

Dheraar Ben Alazwar Mosque is a unique religious building and tourist attraction. This sacred edifice boasts the tallest minaret in Damascus and a beautiful green dome. Admire this fine example of Damascene architecture!
Image by Bernard Gagnon on Wikimedia under Creative Commons License.