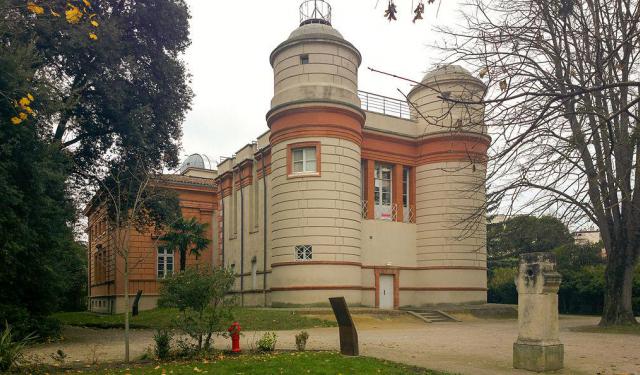 Image by Didier Descouens on Wikimedia under Creative Commons License.

Many of Toulouse's most popular attractions are located in the historical center of the city. However, if you want to explore Toulouse further, visit the eastern part of the city. You will see more locals and be able to better practice your French. Take this tour to explore the eastern part of Toulouse.
How it works: Download the app "GPSmyCity: Walks in 1K+ Cities" from iTunes App Store or Google Play to your mobile phone or tablet. The app turns your mobile device into a personal tour guide and its built-in GPS navigation functions guide you from one tour stop to next. The app works offline, so no data plan is needed when traveling abroad.

The Church of Saint-Aubin is located in the Saint-Aubin-Dupuy area. This massive church was built in 1847 by the architect Jean-Auguste-Marie-Therese Delort. It was built on the site of an old cemetery. The architectural style of the church is a combination of Gothic Art, Romanesque and Byzantine. It is the largest religious edifice built in the nineteenth century in Toulouse. Sometimes on Sundays the church is reserved for Orthodox worship services.
Image by Christophe Pasquier on Flickr under Creative Commons License.
2

Terre Cabade Cemetery is a city of the dead situated at the outskirts of Toulouse. This huge necropolis contains the graves of many renowned personalities of Toulouse: Urbain Vitry, Jules Léotard, Joseph Engelmajer and many others. The tombs, situated on the cemetery's streets, are covered with elaborate embellishments. While walking, you can smell the scent of the magnolia trees. One section of the cemetery called Terre-Salonique is limited to those who died during war.
Image by Herve Minvielle on Flickr under Creative Commons License.
3

Saint Sylve Church is situated at the intersection of three streets: Rue de 10 Avril, Rue Reille and Rue Rene Leduc. The church has a simple facade but is a revelation inside. The church is open for Catholic worship on Wednesday, Friday, Saturday and Sunday.
Image by LabyrinthX on Flickr under Creative Commons License.
4

The Observatoire de Toulouse (Toulouse Observatory) was established in 1733. It was founded by l'Académie des Sciences, Inscriptions et Belles-Lettres de Toulouse ("Academy of Science, Inscriptions and the Humanities of Toulouse"). It was moved in 1841 and again in 1981. The observatory has had many telescopes over its lifetime. An 83-centimeter aperture refractor telescope was installed in 1875 under the directorship of Félix Tisserand (1845–1896). Tisserand published Recueil d'exercices sur le calcul infinitesimal and made several important expeditions, including an 1874 trip to Japan. Tisserand was succeeded by Benjamin Baillaud (1848 – 1934) who was director from 1878 to 1907.
Image by Emmanuel Cassar on Flickr under Creative Commons License.
Sight description based on wikipedia
5

Mediatheque Jose Cabanis is located in Toulouse's Marengo District. This building was designed by the architectural firm of Jean-Pierre Buffi and was completed in 2004. The building provides a tremendous view of Avenue Georges Pompidou, Place Wilson and Avenue Jean Jaures. The building is connected to an underground network that offers access to public transportation, including trains, local and regional bus service and the subway.
Image by Paul Naja on Flickr under Creative Commons License.
6

L'Occitania Péniche is a restaurant located on a boat. Dine here to discover the charm of the Canal du Midi and savor the flavors of southwestern French cuisine. It is an ideal location for celebrations or special occasions. The boat leaves the banks for trips on the Canal du Midi. Between courses, the ship's captain tells stories of the famous canal. The atmosphere is relaxed, with jazz music playing in the background.
Image by U-g-g-B-o-y-(-Photograph-World-Sens e-) on Flickr under Creative Commons License.
7

Toulouse-Matabiau is the main railway station in Toulouse. In 1853, Émile Pereire and his brother Jacob founded the CF du Midi. Three years later, the line from Agen to Toulouse opened and was then extended from Bordeaux to Sète in 1857. The current structure was built between 1903 and 1905 and replaced an older, smaller building. The station took the name of the borough it was situated in, an area called Matabiau. It was designed by Marius Toudoire (who also designed Bordeaux Station) and was built with stone from the Roman city of Saintes. Like the Midi station in Bordeaux, Matabiau Station displays 26 coats of arms on the front of the building, depicting the 26 destinations that Midi served.
Image by styeb on Flickr under Creative Commons License.
Sight description based on wikipedia