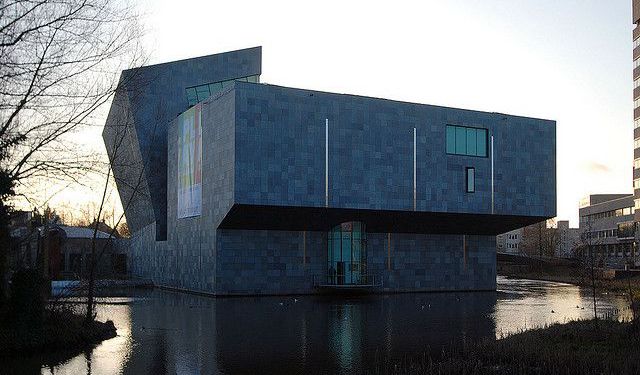 Eindhoven is an extremely developed city from a cultural and artistic point of view. Visitors will be pleased to admire and become part of the multicoloured exhibitions of modern and classic art in the galleries, to learn the history of the DAF factory and to admire the design of Kempenland Museum and Van Abbemuseum's buildings. People of any age and social category will find in the present guide something interesting and useful for themselves.
Image Courtesy of Flickr and IK's World Trip.
How it works: Download the app "GPSmyCity: Walks in 1K+ Cities" from iTunes App Store or Google Play to your mobile phone or tablet. The app turns your mobile device into a personal tour guide and its built-in GPS navigation functions guide you from one tour stop to next. The app works offline, so no data plan is needed when traveling abroad.

The museum has several distinct target audiences. Primary among these are school children, who comprise most of the visitors on weekdays. In the weekends and during holiday season the museum focuses on regular tourists. The museum features a lot of living history exhibits as well as semi-historical reenactments. During holiday seasons extra activities are staged for children. The museum also arranges historically themed corporate and family outings outside of opening hours. Some 60.000 people visited the museum in 2005.

Image Courtesy of Wikimedia and Rosemoon.
Sight description based on Wikipedia.
2

The Milieu Educatie Centrum on the territory of the Genneper Park is an ideal place for both adults and children to learn more about the environment. The younger generation will be delighted to admire the mammoth skeleton, enjoy the playground that has attractions even for the highly active, watch an interactive exhibition in the form of a fairy tale and many other entertaining activities. The educational center is located not far from a water mill, which aside from being a very popular attraction, houses a small shop. The mill has been declared a national monument. It was installed in 1884 by Vincent van Gogh and throughout its existence, has undergone much renovation.
Image Courtesy of Wikimedia and Wammes Waggel.
3

The DAF Museum was initially opened as a blacksmith's workshop. The building that houses the museum was constructed in 1884 as a brewery. The owner of the "De Valk" brewery was A. H. Huenges, who gave permission to Hub and the Wim Van Doorne brothers to open their machine repair business. As the years passed, the workshop was transformed into a successful company which concentrated on the production of trailers and later, automobiles. Nowadays the museum exposes a big collection of old trailers, cars, trucks as well as early instruments and machinery used for production and repair. DAF Museum is divided into several rooms, with each of them exposing different periods and particularities of the factory. The museum is open from Tuesday to Sunday 10.00 until 17.00.
Image Courtesy of Wikimedia and Wammes Waggel.
4

The main building of the Van Abbemuseum was designed by Alexander Kropholler and was built in 1936 in order to house the big collection of modern art items donated by Henri van Abbe to Eindhoven in 1903. The structure was created in traditional architectural style using red bricks. As the collection grew throughout the years, it was decided to build an extension to the existing building. The new building's design was created by Abel Cahen - a talented contemporary architect. The new addition of the museum was inaugurated by Queen Beatrix. The collection of Van Abbemuseum includes numerous exponents made by famous modern artists like Pablo Picasso, Piet Mondrian and El Lissitzky. The museum has an art cafe and a gift shop attached to it. Visitors are welcome to visit from Tuesday to Sunday 11.00 to 17.00. On Thursdays, the museum is open until 21.00.
Image Courtesy of Wikimedia and Lempkesfabriek.
5

MU is a contemporary art gallery located on the second floor of the ex-Philips factory, known also as De Witte Dame. The gallery exposes works by both famous artists and young talents, its aim being not only to show off the extra contemporary exhibits, but to promote and sustain talents. The space of MU is always full of new and incredible collections by native and foreign creators. The gallery is visited by approximately twenty thousand art lovers per year. The doors of the gallery are open from Monday until Friday from 10.00 to 18.00, Saturdays from 11.00 to 17.00 and Sundays from 13.00 to 17.00.
Image Courtesy of Flickr and we-make-money-not-art.
6

The Philips Incandescent Lamp Factory was the first Philips factory to create lamps. It was inaugurated in 1891. The initiator of the project was Gerard Philips, who rented the building and hired people to do manual work. After three years, the business was joined by Anton Philips, Gerard's brother, after which the factory started to expand and gain a reputation. In 1991 a brand new building was constructed across the road and the factory moved there. A red light representing the contact between the new and the old illuminated the road between the two buildings. In March, 2002 the structure was opened to the public as a museum. It is divided into two parts, one of which exposes paintings and sculptures somehow linked to artificial lighting and the second showing off machines and tools used for the manufacture of light bulbs, mostly invented by Philips. The museum is open from Tuesday to Sunday.
Image Courtesy of Wikimedia and Lempkesfabriek.
7

The Temporary Art Centre, or TAC is one of the most diverse cultural and artistic venues in Eindhoven. The centre comprises a large number of rooms with exhibition halls, workshops, a lounge and even a music studio with a stage. People interested in art and culture are welcome to contribute to the development and promotion of TAC - from musicians to photographers and fashion designers. The entire space of the Temporary Art Centre is about two thousand square metres. The centre can be visited on Thursday: 16:00- 00:00, Friday: 16:00- 01:00, Saturday: 13:00- 01:00, Sunday: 13:00- 00:00.
Image Courtesy of Flickr and rosscrawford1.