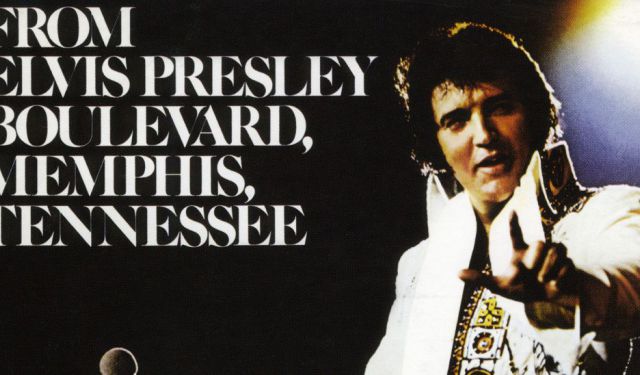 Image by Oldmaison on Flickr under Creative Commons License.

Memphis is the city of Elvis Presley, and serves as a shrine of sorts to the King. Even though Presley died in 1977, his fans continue to flock to Memphis to pay their respects to the man and his music. This tour takes you to view the school and house of Elvis Presley, as well as the legendary Sun Studio where Elvis recorded. Dress at the same shop as Elvis did! Check out the Gibson Guitars that Elvis used to play! Take this tour and follow in the footsteps of Elvis!
How it works: Download the app "GPSmyCity: Walks in 1K+ Cities" from iTunes App Store or Google Play to your mobile phone or tablet. The app turns your mobile device into a personal tour guide and its built-in GPS navigation functions guide you from one tour stop to next. The app works offline, so no data plan is needed when traveling abroad.

It may sound amazing in this day and age, but Elvis was the first in his family to finish high school! Elvis attended Humes High School (now Humes Middle School) from 1948 until 1953, the year of his graduation. It was at this school that Elvis experienced his first taste of success when he gave an onstage performance as part of his school's talent show. Look at this stage. More than half a century ago, young Elvis was singing and playing the guitar here. And do you think the future King of kings won the talent contest? Of course, Elvis came in the first, as he always did!
Image by Cyborgface on Flickr under Creative Commons License.
2

The year was 1948. Elvis and his parents moved to Memphis from Tupelo. The Presley's didn't have much money, so they had to live in a series of boarding houses and apartments. This apartment in Lauderdale Courts was the third home for the family for which they paid $35.00 per month in rent. Elvis lived in Lauderdale Courts until 1952, when his parents' income increased, and the family moved to a better residence. Today, Lauderdale Courts apartments are available to rent to anyone. Go ahead, do it, but just for one night!
Image by Ralph Wolfe Cowan on Flickr under Creative Commons License.
3

Poplar Tunes was a record store near Lauderdale Courts. As a teenager, Elvis used to spend lots of time in the store, absorbed with his dream of making it big in the music industry. Many years later, at the height of his fame, Elvis stopped in at Poplar Tunes to inquire about how well his records were selling. The store closed in September 2009.
Image by oddsock on Flickr under Creative Commons License.
4

Don't miss the opportunity to approach the shores of the great Mississippi River and view the statue of Elvis Presley at the Tennessee State Welcome Center! The welcome center was opened a few years ago and became the second home of the large bronze statue of Elvis. The original location of the statue was Beale Street in Memphis. Visit the Tennessee State Welcome Center to see the King forever young, standing in all his glory.
Image by Victor Chapa on Flickr under Creative Commons License.
5

5) Lansky at the Peabody

Elvis called him "Mr. Lansky," faithful customers call him "Mr. B.", and the world knows him as "Clothier to the Stars". Bernard Lansky's store, located in the lobby of the Peabody Hotel in Memphis, is legendary. Elvis collaborated with Mr Lansky throughout the course of his career. When he first bought a shirt from Lansky it the 1950s, it cost just $3.95. As Elvis became more famous, Lansky was named his PR man all over the world. Frank Sinatra, Carl Perkins, and B.B. King have also shopped at Lansky at the Peabody.

Image by Metro-Goldwyn-Mayer, Inc. on Wikimedia under Creative Commons License.
6

Located on Beale Street, in the very center of shopping life, Memphis Music Records Tapes can impress even the most experienced shoppers! The store has a unique collection of vintage recordings of Memphis music! So, all you blues lovers, gospel admirers, rock n’ roll fans and jazz devotees, Memphis Music Records Tapes is waiting for you to come and assuage your music fever!
Image by terri brown on Flickr under Creative Commons License.
7

No trip to Memphis would be complete without a stop at the famous Sun Studio. The original name of the studio was the Memphis Recording Service. The studio was opened by Sam Phillips in 1950 and was located in the same building as the Sun Records record label. Elvis Presley, Roy Orbison, Johnny Cash, Ike Turner, and B.B. King are just a few of the great artists who either recorded at the studio or were signed at the label.

The studio was nicknamed the “Birthplace of Rock ‘n’ Roll” when Ike and Tina Turner recorded here their Rocket 88 song, considered by many to be the first Rock ‘n’ Roll track. In 1960, the studio was moved to Madison Avenue and renamed Phillips Recording.

Twenty-five years later, Phillips returned to the studio with Carl Perkins, Roy Orbison, Johnny Cash and Jerry Lee Lewis to record the Class of '55 album. In 1987, the studio was restored to its former glory and became a tourist attraction and a working recording studio.

During the day, the building is open for tours. In the evening, artists can rent the recording studio. A "must-see" are the video interviews of people who recorded or worked with people at the studio. The place is open Monday through Friday from 10 am to 6 pm.


Image by cloudsoup on Flickr under Creative Commons License.

Create Your Own Walk in Memphis

Creating your own self-guided walk in Memphis is easy and fun. Choose the city attractions that you want to see and a walk route map will be created just for you. You can even set your hotel as the start point of the walk.

Let this night be the one you'll never forget! Warm up with a salsa at the Rumba Room. Get into a heated discussion about what you think is the best beer in the world at the Flying Saucer Draught Emporium. Visit Alfred's, the best dance club on Beale Street! Feel the spirit of the South at the Hard Rock Cafe! Life is too short to sleep! Take this night club walking tour to feel "the...  view more

Taking this self-guided tour, you will become familiar not only with Memphis's most beautiful historic architecture, such as the Magevney House and the Mallory-Neely House, but you will also learn how to find your way around the asphalt jungle of downtown Memphis. 100 North Main and the Sterick and Dermon Buildings, the tallest buildings in Memphis, will become your guides as you navigate the...  view more

Visit Beale Street, the cradle of Memphis blues. Find out about the first jug bands at the Old Daisy Theatre. See the famous washtub bass! Learn about the musical instruments, such as the kazoo and guimbarde! Check out W.C. Handy's statue. Enjoy the famous "Woke Up This Morning," "Please Love Me," and other hits of B.B. King at his blues club. Take this tour and empathize...  view more

Do you want to know about a woman who defeated a brain tumor? Do you want to find out more about the American Civil Rights Movement? Are you absolutely sure that fire isn't worth playing with? What do you know exactly about America's greatest river? Are you really an expert on Jewish and Native American art? If you want answers to these and other questions, take this self-guided tour of...  view more

Downtown Memphis, located on the Mississippi River, is the oldest part of the city. Start your self-guided tour at the Fire Museum of Memphis, then head to the Peabody Hotel to see the "Peabody Ducks." Visit a classic movie palace, then honor a U.S. civil hero and view the Memphis skyline from Tom Lee Park on this tour of Memphis' downtown highlights.

The churches of Memphis have seen much hardship, from slavery to racism to yellow fever epidemics, yet they have withstood these trials, as have the American people. On this tour, you will see the oldest church in Memphis, the First United Methodist Church. You will find out why St.Mary's is associated with Martin Luther King's death and much more.