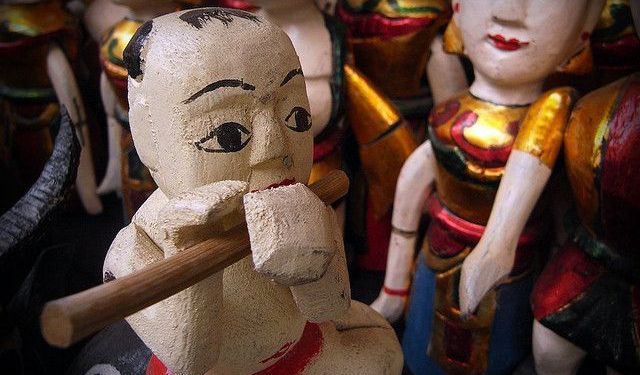 Image by kudumomo on Flickr under Creative Commons License.

Entertainment for Children in Hanoi (Self Guided), Hanoi

There are a lot of tempting places to visit in Hanoi, which is especially true for children when everything seems a hundred times more attractive. Driving carts, boating, shopping for sweets, toys, and other gifts are just a few of the many things to do.
How it works: Download the app "GPSmyCity: Walks in 1K+ Cities" from iTunes App Store or Google Play to your mobile phone or tablet. The app turns your mobile device into a personal tour guide and its built-in GPS navigation functions guide you from one tour stop to next. The app works offline, so no data plan is needed when traveling abroad.

The tiny bricks of plastic that take most of us back to childhood are still popular with the little ones. The indispensable Lego Shop provides children with intellectual toys driven to help spur creativity and imagination. The shop is located near Hoan Kiem Lake.
Image by ebifry on Flickr under Creative Commons License.
2

The Thang Long Water Puppet Theater in Hanoi seeks to preserve an ancient Vietnamese art form developed in the Red River delta in North Vietnam. Water puppetry or Mua Roi Nuoc was performed in shallow flooded paddy fields and ponds of the Red River delta. The theater is a well known Vietnamese cultural event and theater troupes have travelled around the world and performed at cultural exchanges and art festivals.

The puppets are mounted on poles hidden under a shallow pool of water. There are performances that portray life in a typical Vietnamese village. Elaborate performances tell tales from legends and myths of rural Vietnam. The brightly colored puppets are made of lacquered wood. The unique special effects of light and water make the show unique. The performance is accompanied by an orchestra that uses traditional Vietnamese musical instruments like drums, flutes, drums and the Dan Bau that resembles a harp. Songs are sung during the performance and stories are told in the native tongue. The puppets are expressive and one does not need to know the language to enjoy the story. Well known performances include the Dance of the Fairies, Dance of the Dragons and the Legend of the Restored Sword.

Each show lasts for about one hour. Cameras are allowed and visitors are sometimes given cds of the music or vcds of the performance when they purchase tickets.

Image by mckaysavage on Flickr under Creative Commons License.
3

If you see a crowd of people eating ice-cream on Tràng Tiền street, rest assured you have discovered Tràng Tiền Ice-Cream. The ice cream vendor opened in 1958 and has since became a sort of tradition for some locals. Flavors like chocolate, green rice, and green bean are the popular choices, yet "to each his own."
Image by Desiree Koh on Flickr under Creative Commons License.
4

The Thong Nhat Park or United Park is a tranquil green space surrounded by bustling streets in Hanoi. Locals and visitors come to the park for jogging, strolls or to take a boat ride on the lake amidst serene natural surroundings in the middle of the city.

The Thong Nhat Park was a waste disposal area under French colonial rule. The area was cleared and the park was built in 1958. It was opened to the public in 1960. At the time of inauguration, Vietnam was divided into two countries. The name Thong Nhat meaning United was given to the park to express the desire of the people to unite the country that was divided as North and South Vietnam at the time. In 1980, the Park was called Lenin Park to commemorate the Russian revolutionary leader’s 110th birthday. Later, a park on Dien Bien Phu street was called Lenin Park and park was given the name Thong Nhat again.

Thong Nhat Park is an oasis of greenery and fresh air surrounded by the bustling Tran Nhan Dong, Le Duan, Dai Co Viet and Nguyen Dien Chieu streets. The park spans an area of 50 hectares and is on the bank of a 7 hectare lake called the Bay Mau Lake. Children will enjoy the driving carts, mirror house and the train ride. The Spring Flower Festival is held during the Tet or Full moon festival and stalls sell food and garments from all the regions of Vietnam.

Image by Leophotos on Flickr under Creative Commons License.
5

The Vietnam Central Circus dates back to the time when Russians had some influence over Vietnam and introduced the Vietnamese community to their entertainment traditions. As a result, locals have taken a liking to the circus. In the permanent tent of the Circus, tourists may cherish performances done by jugglers, gymnasts, bears on motorbikes, as well as acts conducted by trained elephants. Each Sunday morning, there is an exclusive performance for children.
Image by Casablanca1911 on Wikimedia under Creative Commons License.