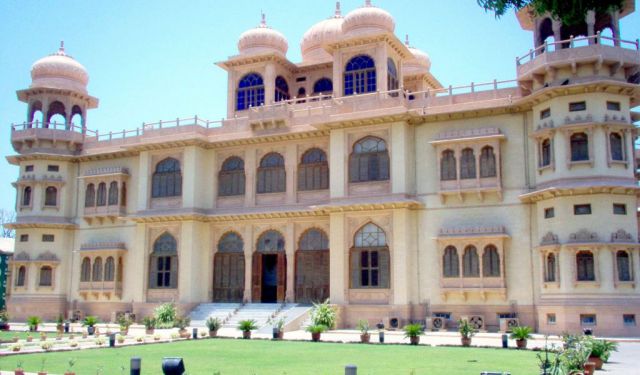 Image by Swerveut on Wikimedia under Creative Commons License.

Clifton is located near Saddar in Karachi. It is here where one will find the most popular beach in the country as well as some of the richest residential and shopping areas. Clifton also contains a large number of parks, restaurants, and other attractions.
How it works: Download the app "GPSmyCity: Walks in 1K+ Cities" from iTunes App Store or Google Play to your mobile phone or tablet. The app turns your mobile device into a personal tour guide and its built-in GPS navigation functions guide you from one tour stop to next. The app works offline, so no data plan is needed when traveling abroad.

Clifton Beach, or Seaview, is a beach located on the Arabian Sea. Clifton beach was once the world's most popular silver-sand beach until an devastating oil spill wrecked havoc on the region. The beach offers attractions for families and tourists, including beach side horse and camel rides, amusement parks, restaurants, and swimming.
Image by jeaniephelan on Flickr under Creative Commons License.
2

Ashrafi Mosque, known as Ashrafi Masjid, is one of the many Karachi mosques. The mosque is located on the territory of Bagh-e-Ibne Qasim Park, which is the largest and most sophisticated park in the city. Ashrafi is not the biggest mosque in the region, but it's still very popular due to the gorgeous surroundings.
Image by ~crystalina~ on Flickr under Creative Commons License.
4

The Bagh Ibne Qasim was inaugurated by President Pervez Musharraf on February 27, 2007 and is Pakistan's biggest park constructed under Clifton Beach Development Project on 130 acres (0.53 square km) of land. The old Toyland Theme Park has demolished and Bagh Ibne Qasim was built in its place. The park cost PKR 600 million and has been completed in 300 working days. More than 10 million people visited the park per year. Is also the largest family park in South Asia. This park was named as Bagh Ibne Qasim in memory of the 8th century Muslim conqueror Muhammad Bin Qasim.

Prior to the initiation of construction on Bagh-e-Ibne Qasim, 73 acres (300,000 square meters) of land was freed from the grip of land grabbers. The entire Clifton beach, and the area now covered under the park. For entertainment purposes of visitors, the park has a turtle pond, in addition to which it also has 24 state-of-the-art washrooms. In order to create an element of originality, the park also has 20 stone canopies. Moreover, hundreds of thousands of unique rose saplings have been planted throughout the park.

Image by Kashif Mardani on Wikimedia under Creative Commons License.
Sight description based on wikipedia
5

The Tomb of Abdullah Shah Ghazi is built on a very high platform with the grave being downstairs. The tomb has a tall and square chamber and a green-and-white striped dome, decorated with Sindhi tilework flags and bunting. Abdullah Shah Ghazi's tomb attracts a steady stream of devotees who shuffle forward to caress the silver railing around the burial place and drape it with garlands of flowers. Syed Abdullah Shah Ghazi was a ninth-century sufi who claimed direct descent from the Prophet and is thought of by his followers as something like the patron saint of Karachi. People, most of them Muslims, come here to pay homage to him from across the country.
Image by Iamsaa on Wikimedia under Creative Commons License.
Sight description based on wikipedia
6

The Mohatta Palace was built by Shivratan Chandraratan Mohatta, an ambitious self-made businessman from Marwar as his summer home in 1927. However, Mohatta could enjoy this building for only about two decades before independence of Pakistan and he left Karachi for India. He built the Palace in the tradition of stone palaces in Rajasthan, using pink Jodhpur stone in combination with the local yellow stone from Gizri. The amalgam gave the palace a distinctive presence in an elegant neighbourhood, characterised by Mughal architecture which was located not far from the sea.

The palace has an area of 18,500 sq ft (1,720 square meters) and its facade is trimmed with windows, stone brackets, spandrels, domes, balustrades with floral motifs and exquisite railings. There are nine domes, with a centre dome in the middle; while the windows in the front portion opening out into the garden are of blue colour and those in the rear area are arched windows with stained glass. The palace has large stately rooms designed for entertainment on the ground floor and more private facilities on the first floor, where there is a terrace provided with a shade from intense sunlight.

Image by Shahid A. Siddiqi on Wikimedia under Creative Commons License.
Sight description based on wikipedia
7

The Two Swords ("Do Talwaar") monument in Karachi is built atop a traffic roundabout in the city. The monument is covered with white marble tiles, surrounded by fountains, and illuminated at night. From the roundabout, roads lead tow Old Clifton, the Jahangir Kothari Parade, Abdullah Haroon Road, the Zamzama district of the Defense Housing Authority, a Naval Housing zone, and the Park Lane community.
Image by Muhammad ameen on Wikimedia under Creative Commons License.
8

Zamzama Boulevard is one of the busiest streets in Karachi and definitely the richest. Near Zamzama Park, the region features a variety of fancy restaurants, designer shops, and important company offices. Costa Coffee, Copper Kettle, and Legrand Restaurant are the most visited destinations on Zamzama Boulevard.
Image by CoolGuy on Wikimedia under Creative Commons License.
9

Zamzama is a very popular park and is also known as Joggers' Park. As the name implies, Zamzama Park offers two jogging paths, one kilometer each, as well as beautiful walking alleys, swings, and other attractions for children. The pride of the park is a big bonsai garden.
Image by ricoeurian on Flickr under Creative Commons License.