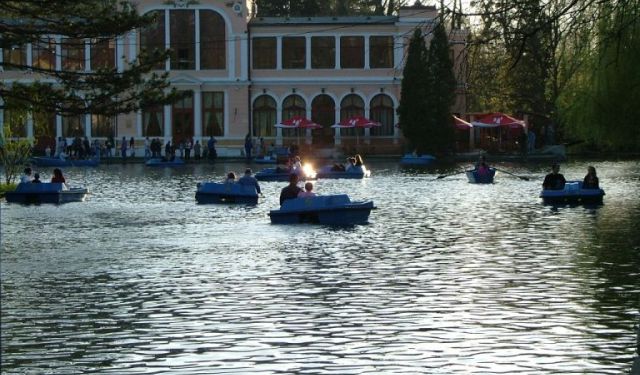 Image by Roamata on Wikimedia under Creative Commons License.

This guide will show you how to spend a day in Cluj-Napoca while exploring the city's offerings for families. Visiting Central Park will leave you with some wonderful memories. Trying traditional food and learning about literature and the arts will also be enjoyable. Take this walking tour and have some fun!
How it works: Download the app "GPSmyCity: Walks in 1K+ Cities" from iTunes App Store or Google Play to your mobile phone or tablet. The app turns your mobile device into a personal tour guide and its built-in GPS navigation functions guide you from one tour stop to next. The app works offline, so no data plan is needed when traveling abroad.

The Amadeus Mozart Café is a very warm place that welcomes your friends and family. The tasty desserts and the various kinds of teas will let you choose whatever your heart wishes. The café has a unique interior design reminiscent of the great musician. The classical and friendly atmosphere is due to the paintings, the old piano and the waitresses' costumes. It is a great place for non-smokers and people who appreciate this decor style.
Image by bortescristian on Flickr under Creative Commons License.
2

Central Park, located in the center of Cluj-Napoca, has very old origins yet remains the most beautiful and scenic park in the city. The statuary group in the park features an extraordinary fountain. The park's lovely lake is large enough to allow for boating by visitors.
Image by Roamata on Wikimedia under Creative Commons License.
3

The Lucian Blaga National Theatre is one of the most prestigious theatrical institutions in Romania. The theatre shares the same building with the Romanian Opera. The theatre was built between 1904 and 1906 by famous Austrian architects Ferdinand Fellner and Hermann Helmer, who designed several theatres and palaces across Europe in the late 19th century and early 20th century, including the theatres in Iaşi, Oradea, Timişoara and Chernivtsi (Romanian: Cernăuţi). The project was financed entirely with private funds. The hall initially had a capacity of 928 places, being conceived in the Neo-Baroque style, with some inflections inspired by the Secessionism in the decoration of the foyer. Between 1950 and 1956 the stage house was extended to 1200 seats.

Image by ES Vic on Wikimedia under Creative Commons License.
Sight description based on wikipedia
5

The Puck Puppet Theatre was established in 1950, performing mostly for children. The shows are in Romanian and Hungarian. The Puck Puppet Theatre has been awarded different prizes such as the Prize for the Art of the Show (1968), the Great Prize at “Puck Animafest” (2003), and many others. Since 2002 the theatre has participated at the international festival organized in Romania.
Image by eddidit on Flickr under Creative Commons License.
6

6) The Botanical Gardens (must see)

The Cluj-Napoca Botanical Gardens, officially the Alexandru Borza Cluj-Napoca University Botanic Garden, was founded in 1920 by Alexandru Borza. The garden is over 14 hectares in area, with over 10,000 plants from throughout the world. It is divided into ornamental, phytogeographic (geobotanical), systematic (taxonomical), economic, and medicinal sections. Romanian flora and vegetation are represented by plants from areas such as the Transylvanian plains, the Carpathian Mountains, and Banat. Among the Botanical Garden's notable attractions are the Japanese Garden (a garden in Japanese style, with a brook and a Japanese-style house) and the Roman Garden with archaeological remains from the Roman colony of Napoca, among them a statue of Ceres, goddess of cereals and bread. These are featured alongside cultivated plants that dominate contemporary Romanian agriculture.

Image by Roamata on Wikimedia under Creative Commons License.
Sight description based on wikipedia