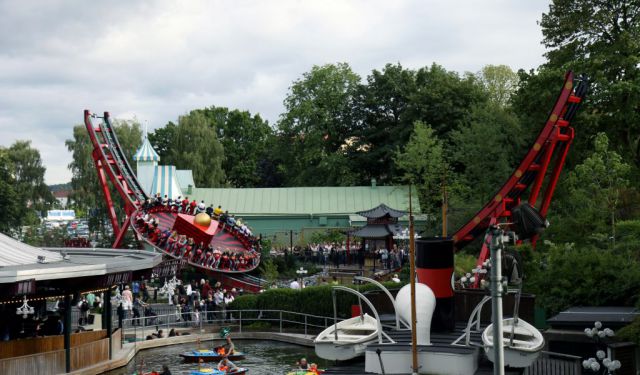 Image by Fluff on Wikimedia under Creative Commons License.

Gothenburg offers superb attractions for family entertainment. It is a wonderful place to go out, spend time in the open air, take a tour by boat and visit some interesting places. Take this walking tour to enjoy a great time with your family.
How it works: Download the app "GPSmyCity: Walks in 1K+ Cities" from iTunes App Store or Google Play to your mobile phone or tablet. The app turns your mobile device into a personal tour guide and its built-in GPS navigation functions guide you from one tour stop to next. The app works offline, so no data plan is needed when traveling abroad.

Liseberg Park, opened in 1923, is the largest and one of the most visited amusement parks in Scandinavia, attracting about 3 million visitors annually. Among its noteworthy attractions is the Balder, voted twice (2003 and 2005) as the Best Wooden Tracked Roller Coaster in a major international poll. It has also been chosen as one of the top ten amusement parks in the world by Forbes Magazine. In addition to the summer, the park is also open during November and December, albeit with fewer rides, hosting a Christmas market with traditional Swedish cuisine, such as mulled wine and döner kebab made from reindeer meat.
Image by Tubaist on Wikimedia under Creative Commons License.
Sight description based on wikipedia
2

Universeum is a public science center in Gothenburg that opened in 2001. It is a part of Evenemangsstråket, close to Korsvägen and Skånegatan, which includes sites of interest such as Scandinavium, Ullevi, Svenska Mässan (Swedish Exhibition Center), Liseberg and the Museum of World Culture. Universeum is divided into six sections, each containing experiment workshops and a collection of reptiles, fish and insects. It occasionally gives Swedish secondary school students a chance to have discussions with Nobel Prize winners and professors.
Image by Erik031 on Wikimedia under Creative Commons License.
Sight description based on wikipedia
3

Gothenburg Concert Hall is located in Gothenburg, Sweden and was built in 1935. The architect for the facility was Nils Einar Ericsson, a major advocate of Functionalism. However, the Concert Hall has a Neo-Classical exterior look, due to the surrounding area at Götaplatsen where the building is placed – the Art Museum and the City Theatre are solid classically designed buildings as well, and were built before the Concert Hall.

In contrast to the exterior, the Concert Hall's interior is modernistic. The main auditorium's plain shaped walls are clad in yellowish-red maple veneer and there are 1,300 seats. There is also a smaller concert hall, Stenhammarsalen, for chamber concerts. The acoustic qualities of Gothenburg Concert Hall have given it a reputation well outside the Swedish borders; Deutsche Grammophon has used the Concert Hall as a studio for a number of records, for example. The Concert Hall is the home stage of the Gothenburg Symphony.

Image by Ärkan on Wikimedia under Creative Commons License.
Sight description based on wikipedia
4

Paddan is a place where boat tours are organized. They offer wonderful guided boat tours of the canal and its many bridges. The guides tell the history of Gothenburg laying the emphasis on the national heritage. Each boat can take about 90 persons and the trip lasts approximately an hour.
Image by Martin Olsson on Wikimedia under Creative Commons License.
5

Skansen Kronan, or Redoubt Crown, was built in the late 17th century, according to the plans of Erik Dahlberg. The fortress and the twin counterpart, Skansen Lejonet, was built as part of the defenses against a possible Danish attack on Gothenburg from the south. The fortress is located on a hill in the Haga district and has a great view of the city. It was used as a military museum until 2004.
Image by Erik031 on Wikimedia under Creative Commons License.
Sight description based on wikipedia
6

Slottsskogen, or Castle Forest, is a 137 hectare park located in central Gothenburg. When the city was founded in the 17th century, Slottsskogen was a forest belonging to Älvsborg Fortress. In the 1880s, merchant August Kobb took the initiative to transform it into a city park with the character of an English garden with lawns and trees. Slottsskogen offers a wide range of facilities, including a zoo, a pond with seals and penguins, a Swedish heritage area with small cottages and a playground for football, softball, Frisbee golf and other sports. Slottskogen is also the home of the annual Way Out West Festival.
Image by BIL on Wikimedia under Creative Commons License.
Sight description based on wikipedia
7

The Slottsskogen Observatory was established more than 70 years ago. It offers wonderful and engaging planetarium shows. During the month of May solar observations are held. Entrance is free for preschool children.
Image by Per Johansson on Wikimedia under Creative Commons License.
8

The Gothenburg Aquarium is located in the same building as the Maritime Museum. It displays a variety of species of underwater life, among which you can see dragon fish, piranha and colorful tropical fish. There is also a terrarium with alligators, salamanders and boa constrictors.
Image by Tor-Egil Farestveit on Wikimedia under Creative Commons License.