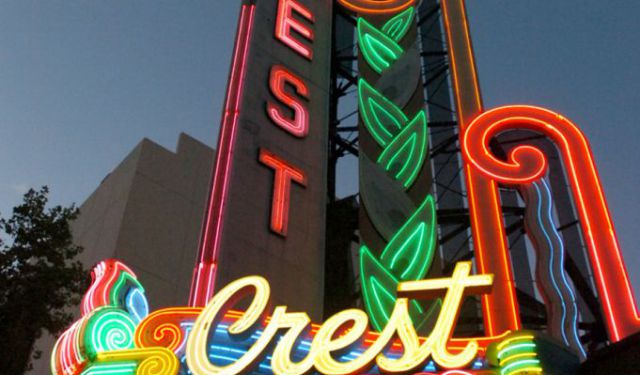 Sacramento is a town where visitors can easily find different attractions and places to have fun. Whether you are with friends or family, this tour guide offers many unique amusement parks and theatres where you can spend time while on vacation. Sign up for the next tour if you want to see the most interesting and attractive places in Sacramento.
How it works: Download the app "GPSmyCity: Walks in 1K+ Cities" from iTunes App Store or Google Play to your mobile phone or tablet. The app turns your mobile device into a personal tour guide and its built-in GPS navigation functions guide you from one tour stop to next. The app works offline, so no data plan is needed when traveling abroad.

Funderland is a park in Sacramento that is particularly for kids. There are various attractions such as airplane rides, carousels, steam trains and others. The admission to Funderland Amusement Park is free. Funderland is a place that is easy to find but hard to forget about.
Image by Bernadette Durbin on Flickr under Creative Commons License.
2

The Sacramento Zoo is located in William Land Park. It opened on June 2, 1927 with 40 animals. On April 6, 2007, a new exhibit featuring six penguins opened to the public. One day prior to this, Mayor Heather Fargo and other guests appeared, dressed in black and white to greet the new arrivals who were on loan for the "one year bash". As of 2009, the Sacramento Zoo began construction on a new barn and yard for the giraffes at the zoo. The current 40-year-old wooden barn was demolished and replaced with a new state-of-the-art barn made of concrete blocks. The new barn has a breeding facility for a future giraffe breeding program at the zoo, as well as many large stalls for the current herd and for incoming giraffes. The new yard has a lake from which the giraffes may drink, a barrier made of trees and rocks and a pavilion where visitors can get a close up view of the giraffes.
Image by L Wade Brown on Wikimedia under Creative Commons License.
Sight description based on wikipedia
3

Fairytale Town is a park where youngsters can engage in creative, ingenious activities and games. Children can pretend that they are heroes of a fairytale or the most beautiful princesses or even make up their own stories. The attractive surroundings and the joviality of the kids are a parent's paradise.
Image by MrMitch on Flickr under Creative Commons License.
4

Vic's Ice Cream (est. 1947) is a restaurant located in the Land Park neighborhood of Sacramento. Best known for its ice cream, Vic's also serves sandwiches and other menu items. Vic's has maintained much the same atmosphere that it had when the store opened in 1947. The black and white checkered floor tiles, tight blue jeans and tucked-in shirts worn by employees as well as the menu items all date back to the store's inception during the Truman administration. Vic's carries 29 standard flavors of ice cream, and during the year several seasonal flavors become available. Each year Vic's is contracted to produce three gallons of garlic ice cream for the Gilroy Garlic Festival in Gilroy, California; this flavor is otherwise unavailable. Vic's is a favorite dining location of life-long Land Park residents and California gubernatorial candidate Phil Angelides, who was known for not tipping his servers well.
Image by Rojer on Flickr under Creative Commons License.
Sight description based on wikipedia
5

At Masullo Pizza, pizza is tastier than ever. This restaurant boasts a sizeable area, large wooden tables, attractive walls and an ample variety of pizza and fresh salads on the menu. Masullo Pizza is an excellent addition to the Sacramento pizzerias.
Image by Sebastian Mary on Flickr under Creative Commons License.
6

The Tower Theatre was established in 1938 and is considered a Sacramento landmark. The theatre's exterior still retains its initial look with the neon lights. The Tower Theatre offers rare movies that cannot be seen elsewhere.
Image by Rojer on Flickr under Creative Commons License.
7

The Crest Theatre is an historic theatre located in downtown Sacramento. The Sacramento French Film Festival is an annual event held in July at the Crest Theatre. It celebrates the present as well as the rich history of French cinema, featuring new releases and rarely seen classics. It is the only festival dedicated to French cinema in Northern California and one of only two on the West coast. The theatre was the location of a 2004 presidential debate between former Green Party presidential nomination candidate Peter Camejo and current independent vice-presidential candidate Norman Solomon on January 29, 2004, regarding the direction the Green Party should take in 2004.
Image by Paul Sableman on Flickr under Creative Commons License.
Sight description based on wikipedia