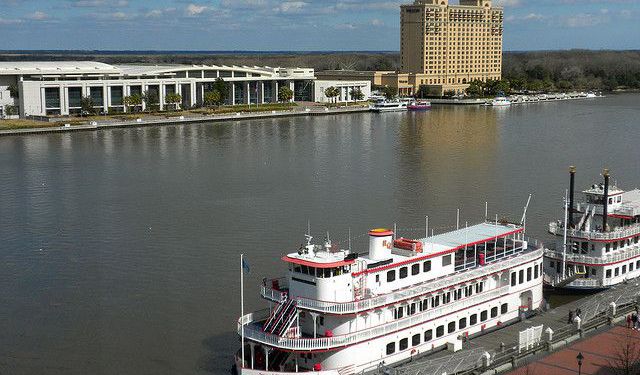 Image by DoNotLick on Flickr under Creative Commons License.

If you are looking for a nice walking tour for your entire family, there are many interesting places for a family to visit in Savannah. Together you can visit the perfect mixture of beautiful parks, historic monuments, galleries and other interesting and informative places. And, of course, the tour includes a couple of nice surprises for your children!
How it works: Download the app "GPSmyCity: Walks in 1K+ Cities" from iTunes App Store or Google Play to your mobile phone or tablet. The app turns your mobile device into a personal tour guide and its built-in GPS navigation functions guide you from one tour stop to next. The app works offline, so no data plan is needed when traveling abroad.

Massie Heritage Center is Savannah's oldest school, and longest-lived. Ten years before Savannah obtained Georgia's first charter for public education, the Heritage Center operated as a free school for the poor. It was built on a corner of Calhoun Square, and all of the buildings on the square have been named historic structures. Money for the school came from Peter Massie, a Scotsman who lived in Savannah for a time. He bequeathed $5,000 to the city of Savannah for the education of poor children, and these funds went toward the Massie School House. When the city was occupied by Union troops, the School House was temporarily turned into a Union Hospital. Afterward, it was reopened as a school and continued to educate students until 1974, when it was closed after almost one hundred and twenty years of continuous operation.

This Greek revival building, designed by architect John S. Norris, houses exhibits ranging from a scale model of Savannah's Historic District to a replica of a hundred-year-old schoolhouse. Other exhibits include displays of Native American art, artifacts, and historical photos; pieces from Victorian era Savannah; and a display honoring the influence of classical architecture on Savannah's varied architectural history.

Why You Should Visit:
To truly be introduced to the rich history of Savannah. It may be the best value for the money for any attraction you see in the city.
Also, a wonderful place to take kids so they can see back in time at what school was like when the first public school was opened in Savannah.

Tip:
The tour takes about 90 mins, but if you really want to take it all in, give yourself 2 or more hours.


Image by Elisa.rolle on Wikimedia under Creative Commons License.
2

2) Jepson Center for the Arts

Jepson Center for the Arts is one of three buildings that comprise the Telfair Museum of Art. This building marked the first expansion of the Telfair's nearly one hundred and twenty year history, and added more than 50% more exhibition and education space to the complex.

The Center for the Arts is housed in an ultramodern building designed by Moshe Safide. Initially, critics were skeptical about how well the new center would fit in with the surrounding buildings. The Telfair Academy of Arts and Sciences and the Owens-Thomas House are two National Historic Landmark buildings, and were built circa 1819. Fortunately, after the Jepson Center for the Arts' unveiling, public reception of the new facility has been warm.

The building itself is actually two separate entities, connected by glass bridges that pass over a protected walkway that was part of Savannah's original 1733 town plan. The center has two large galleries for traveling exhibitions. Permanent galleries include one for African-American artwork, one for Southern art, one for photography, and one for works on paper, a community gallery, a “hands on” gallery for kids and classroom groups, outdoor sculpture areas, educational art studios, a large auditorium, and more.

River Street Sweets is probably the best candy and sweets store in all of Georgia. There is so much candy to choose from that you can easily get lost in the rows. Sweets's baked goods and ice creams are also all extremely tasty, so save room to try some!

Hours: Daily: 9 am- 11 pm.
Image by brandonink2001 on Flickr under Creative Commons License.
4

Peter Leopold, founder of Leopold's Ice Cream, developed the most delicious ice cream recipes as early as 1919. His signature flavor Tutti-Frutti was known for its unforgettable taste all over the United States! Today the store receives a great deal of attention due to its great ice cream making traditions and for its building designed by Dan Lomino, the famous Academy Award nominee. Don't miss the chance to enjoy as many flavors of Leopold's original ice cream as you can!

Emmet Park is named for orator and patriot Robert Emmet, and is located in Savannah's celebrated historic district. It used to be known as Irish Green due to its proximity to Irish residents in Savannah's Old Fort area, but was renamed for Emmet in 1902 to commemorate the centennial of his passing. Emmet was a hero to Savannah's people of Irish descent, for his role in leading a Dublin uprising for Irish independence and subsequently being executed for treason.

The park is notable for the many monuments and historic features that it's home to. It houses the Harbor Light, which is a gas-powered light erected to help guide ships in the Savannah River. Situated 77 feet above the river, it was intended to function as a beacon to help ships avoid the wreckage of ships sank by British forces during the British occupation of Savannah. It also houses the Irish Monument, a celtic cross carved from Irish limestone from County Roscommon, Ireland. This monument was intended to commemorate Georgian people of Irish ancestry. The Chatham Artillery Monument is another notable feature of Emmet Park. This monument is inspired by the 101st Airborne Memorial in Arlington National Cemetery, and is carved from dark gray granite, topped with a bronze eagle.
Image by pamramsey on Flickr under Creative Commons License.
6

Savannah's Waving Girl has been the source of legend for ages. Living in a lighthouse, she would by day wave a handkerchief and by night a lantern to every passing ship entering or leaving Savannah. As she did this religiously for over 50 years, she became a living legend as all sailors watched to be greeted by her. Most of her admirers never knew her real name, Florence Martus, and called her the Waving Girl.

Martus waved hello and goodbye to the ships passing by her home from 1886 to 1931. Nobody knew why she did it, but conjecture was rampant – one of the favorite myths about the Waving Girl is that she'd fallen in love with a sailor in the 1890s. Promising she'd be the first to greet him, she began waving at every ship. When he never returned, she continued waving in the hopes that one of the entering ships would have him aboard. Waving wasn't all Martus did, though – in 1893, she and her brother risked their lives to save several men from a sinking ship using nothing but a flat-bottomed rowboat.

Now, a bronze statue of Florence Martus sits on the waterfront. It was designed by famous sculptor Felix de Weldon, the creator of the equally famous Marine Corps War Memorial showing the flag raising on Iwo Jima. It was erected in 1972 at Riverside Park and depicts Florence waving her kerchief, and her pet collie by her side. The little park is a good place to sit and watch the barges and boats go by.

Tip:
There are plenty of other statues around the riverfront that are also worth taking the time to enjoy.
Image by Jami430 on Wikimedia under Creative Commons License.

Remarkable and conspicuous Catholic, Baptist, Lutheran, Presbyterian, Unitarian and Methodist Churches dot the cityscape of Savannah and are interesting places to visit. You you may even have the chance to take part in parish services that are held weekly. Don't miss the opportunity to enjoy the wonderful architecture of Savannah's religious buildings and the peace that a church service...  view more