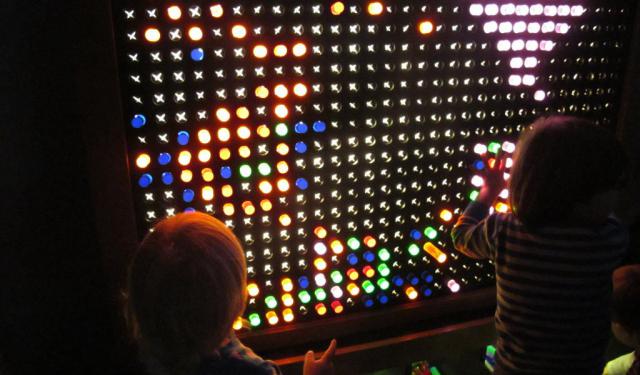 Image by goodbyefeet on Flickr under Creative Commons License.

For many years Portland has been famous for the development of its parks, forest areas and green spaces for the benefit of people who love and understand the value of nature. Sharing Portland's nature with your family will lead to the creation of treasured memories. Take this tour to meet the inhabitants of the Oregon Zoo, to see the smile on your child's face at the Portland Children's Museum, and discover new pine trails in the Hoyt Arboretum!
How it works: Download the app "GPSmyCity: Walks in 1K+ Cities" from iTunes App Store or Google Play to your mobile phone or tablet. The app turns your mobile device into a personal tour guide and its built-in GPS navigation functions guide you from one tour stop to next. The app works offline, so no data plan is needed when traveling abroad.

The Oregon Zoo, formerly the Washington Park Zoo, is located 2 miles (3.2 km) southwest of Downtown Portland, inside Portland's Washington Park, and includes a narrow-gauge railway that connects to the International Rose Test Garden inside the park. Opened in 1888 after a private animal collector donated his animals to the City of Portland, the 64-acre (26 ha) zoo is now owned by the regional Metro government.

A member of the Association of Zoos and Aquariums, it has successful breeding programs for California Condors and Asian elephants. The zoo also boasts an extensive plant collection throughout its animal exhibits and specialized gardens. During the summer it is host to a concert series, and in the winter produces a holiday light show viewed from the train. The Oregon Zoo is Oregon's largest paid attraction, with more than 1.6 million visitors in 2008 to 2009.

Image by EncMstr on Wikimedia under Creative Commons License.
Sight description based on wikipedia
2

Portland Children's Museum is located in Portland's Washington Park, adjacent to the Oregon Zoo. it is the sixth oldest children's museum in the world and the oldest West of the Mississippi. The 50,000 sq ft (4,600 m2) museum receives over a quarter of a million visits from children and their families every year. It is a non-profit organization with tax-exempt status and member of the Association of Children's Museums.

Portland Children's Museum was founded in 1946 as the Adventure House by recreation director of Portland Parks & Recreation, Dorothea Lensch. Dr. Lensch was the first woman appointed Recreation Director for the division.

The mission of Portland Children's Museum is to inspire imagination, creativity and the wonder of learning in children and adults by inviting moments of shared discovery. The museum uses cognitive science and child development research to inform environments and programs that promote healthy cognitive, social, emotional and physical development.

The World Forestry Center is an American nonprofit educational institution, located near the Oregon Zoo in Washington Park. The World Forestry Center has its roots in the 1905 Lewis and Clark Centennial American Pacific Exposition and Oriental Fair for which an enormous log cabin was built of huge native trees and advertised as the world's largest. Public interest in the Forestry Building, which was turned over to the State of Oregon, lasted long after the exposition ended, right up until it was destroyed by fire on August 17, 1964.

The day after the fire, a group of civic and industry leaders conceived The Western Forestry Center. A new, more fire-resistant forestry building designed by Oregon architect John Storrs was built in Washington Park. It opened to the public on June 5, 1971. The name changed to "World Forestry Center" in 1986 to reflect the center's revised focus on forestry on a global scale. The WFC Forestry Hall of Fame commemorates people who have made important contributions to forestry. The photographs and biographies of nearly 200 forestry leaders are displayed in three chests constructed of select Black Walnut from the eastern U.S.

The Oregon Vietnam Veterans Memorial is a 3.25 acre (30k m²) outdoor memorial dedicated to Oregonians who served in the Vietnam War. The memorial was dedicated in 1987, inspired in 1982 by visits to the national Vietnam Veterans Memorial by five veterans and the parents of a Marine killed in Vietnam. Walker and Macy of Portland designed the memorial.

The memorial is wheelchair accessible and consists of a 1200 foot (370 m) spiral path within an immaculately landscaped bowl containing lawns, flowers and low hedges surrounded by a mixture of tall trees. Along the path are understated monuments which name soldiers killed or missing. Each monument is year specific and effectively communicates the progression of the war: a slow beginning escalating to a crescendo then diminishing before the end.

The memorial is located between Hoyt Arboretum and the World Forestry Center and near the Oregon Zoo. The adjacent trail system connects to Forest Park, and is close to the International Rose Test Garden and Portland Japanese Garden.

The Hoyt Arboretum is located atop a ridge in the west hills of the city. It was founded in 1922 by a collection of timber industry representatives, the U.S. Forest Service, the Portland Parks & Recreation department, and enthusiasts.

The 187-acre (0.76 km2) arboretum hosts just under ten thousand individual trees and shrubs of more than eleven hundred species from all over the world. Most have labels identifying common and scientific names and region of origin. The arboretum has twelve miles (19 km) of trails (two of which are suitable for wheelchairs), a visitor center, an indoor classroom with seating for 40 people, a picnic shelter and a meadow. Volunteer tour guides have been available since the 1970s.

Of note is the Dawn Redwood, one of only a few known deciduous conifers (needle and cone bearing trees that lose their leaves in the winter). The species was once thought extinct and known only in fossils, but was rediscovered in a remote valley in China in the early part of the twentieth century. The tree was reintroduced to the western hemisphere through saplings planted in the Hoyt Arboretum. The trees bear soft, short needles and have a distinctive look in that the branches seem to push out from folds in the trunk. Cynthia Haruyama is the current executive director of the Hoyt Arboretum Friends Group. She has been the director since 2001.

The Pittock Mansion is a French Renaissance-style "château" in the West Hills of the city, originally built as a private home for The Oregonian publisher Henry Pittock and his wife, Georgiana. It is a 22-room estate built of Tenino Sandstone situated on 46 acres (190,000 m2) that is now owned by the city's Bureau of Parks and Recreation and open for touring. In addition, the grounds provide panoramic views of Downtown Portland.

Georgiana, one of the founders of the Portland Rose Festival, died in 1918 at the age of 72, and Henry in 1919 at 84. The Pittock family remained in residence at the mansion until 1958, when Eric Ladd, who had stayed in the mansion for four years, and Peter Gantenbein, a Pittock grandson who had been born in the house, put the estate on the market and was unsuccessful in selling it.

Extensive damage caused by the Columbus Day Storm in 1962 caused the owners to consider demolishing the building. The community raised $75,000 in three months in order to help the city purchase the property. Seeing this popular support, and agreeing that the house had tremendous value as a unique historic resource, the City of Portland purchased the estate in 1964 for $225,000.

Portland offers visitors a considerable array of museums to visit and enjoy. Safeguarding important artifacts, telling the stories of the area's past and current inhabitants, and highlighting aspects of life in Portland, the museums on this next walking tour are certain to entertain and educate you.

The largest city in the U.S. state of Oregon, Portland sits on the banks of two rivers (Columbia and Willamette) and is renowned for its eco-friendly approach manifested in lots of parks, bridges and cycling paths. It is also home to beautiful urban architecture and theme museums. These and other attractions have made up this orientation tour.