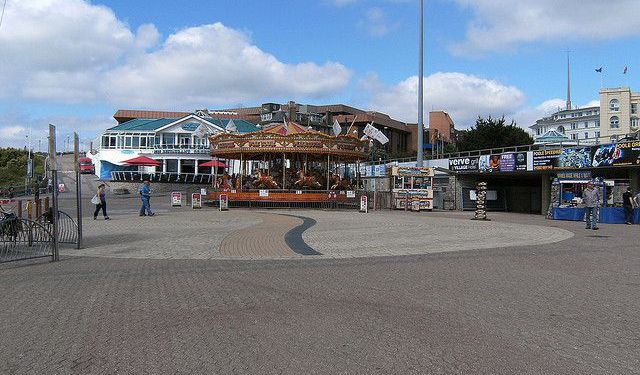 Image by shining.darkness on Flickr under Creative Commons License.

Families will find various interesting attractions in Bournemouth. There are specific kids' attractions at the waterfront. Cinemas, great cafes and toy shops are situated in the centre of Bournemouth. Take this self-guided tour for amazing family entertainment in Bournemouth.
How it works: Download the app "GPSmyCity: Walks in 1K+ Cities" from iTunes App Store or Google Play to your mobile phone or tablet. The app turns your mobile device into a personal tour guide and its built-in GPS navigation functions guide you from one tour stop to next. The app works offline, so no data plan is needed when traveling abroad.

If you love going to the movies this is the complex to do it in! In addition to the standard popcorn, soda, sweetie concessions, there is every restaurant with any type of food you wish to dine in – from pizza to Mexican to steaks or burgers if you want to enjoy a meal, either before or after the film. Better still, order your food and drink and take it into one of the 10 screen theatre rooms with you! Some screens offer reclining seats with footrests, while others offer roomy seating but all have spaces for cups and elbows! This is the future of cinema-going; multi-screen, multi-restaurants.
Image by Fernando de Sousa from Melbourne, Australia on Wikimedia under Creative Commons License.
2

Bourmouth Park is a family-friendly park along Westover Road. The park boasts beautiful scenery and a pond. There are always many people walking through the park or lying on the grass. In this park, there is a balloon that can take you up into the air and treat you to a panoramic view of the town, sea and beaches.
Image by shining.darkness on Flickr under Creative Commons License.
3

There is a square in front of the Bournemouth Pier with several family-friendly attractions. Families with small kids can enjoy a merry-go-round. Teens can climb at the mobile climbing wall. There is a special place for roller skating. Ice-cream and souvenirs are sold at this square.
Image by shining.darkness on Flickr under Creative Commons License.
4

Situated on Bournemouth’s seafront, the Oceanarium offers visitors a journey around the waters of the world. 10 recreated environments include the Amazon, Key West, the Mediterranean, Abyss, and the Great Barrier Reef. The Oceanarium is home to the world’s first Interactive Dive Cage, which submerges users in a 270-degree virtual view of the ocean.

Interactive touch technology brings visitors up close to computer generated sea creatures including a dolphin, manta ray and shark through a series of animated experiences, games and challenges. It also features an amazing encounter with a blue whale that swallows the Cage, taking visitors on a journey through its digestive system. Launched in June 2008, the Oceanarium’s interactive feature, Global Meltdown, looks into the potential effects of global warming. Visitors are transported to an imagined time in the future when sea levels have risen to such an extent that tropical fish and sharks swim through the streets of London. The Oceanarium is home to hundreds of creatures from across the globe. The Oceanarium welcomes in excess of 225,000 visitors per year and in November 2008, the Oceanarium was announced as Tourism Attraction Experience of the Year at Bournemouth’s annual Tourism Awards. The attraction is owned by Spanish leisure giant Parques Reunidos, who operate 67 parks across the world.

Image by shining.darkness on Flickr under Creative Commons License.
Sight description based on wikipedia
5

The West Cliff Railway, or West Cliff Lift, is a funicular railway located in the English seaside resort of Bournemouth. The line serves to link the seaside promenade and beach with the cliff top and the town behind. The line is owned and operated by Bournemouth Borough Council. The West Cliff Railway was opened in 1908 by Bournemouth Corporation, some four months after the opening of the nearby East Cliff Railway. Like the East Cliff Railway, it was electrically operated from the start, with winding gear situated at the upper station driven by a 25 horsepower winding motor. The line was controlled by a driver at the upper station, assisted by an attendant at the lower station. Wooden-bodied cars were used. The winding motor was replaced in the 1960s by a 28 horsepower (21 kW) three-phase motor.

The cars were also replaced in the 1960s by aluminium-bodied cars intended to be interchangeable across all three of Bournemouth's surviving cliff railways. In 1987 the track was re-laid, and during the 1990s the line was further upgraded with the installation of an electronic control system. The West Cliff Railway is one of three such cliff railways in Bournemouth, the other two being the East Cliff Railway and the Fisherman's Walk Cliff Railway.

Image by Steve Edge on Wikimedia under Creative Commons License.
Sight description based on wikipedia
6

The beaches are the main attraction for tourists in the resort town of Bournemouth. The most popular beach is Durley Chine Beach, with tonnes of golden sand and clear water. You will find beach entertainer, sports and a bouncy castle. It is set very close to the famous Bournemouth Pier. There are shops on this beach and a funicular that can take you up the cliff.
Image by Stephen Gilmore on Wikimedia under Creative Commons License.

According to statistics, people that live in Bournemouth are happy and satisfied with their lives. They have beautiful gardens to walk in, beaches and great shopping opportunities. This self-guided tour will reveal to you the everyday way of life of people living Bournemouth suburb -Boscombe.