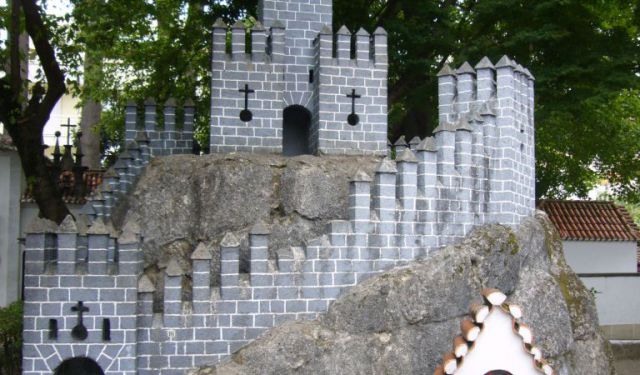 Image by Lala Lugo on Wikimedia under Creative Commons License.

Coimbra has some great and unique attractions for families with kids. The most popular is Portugal dos Pequenitos, which means "Portugal for the little ones." There are beautiful gardens, beaches and museums in Coimbra that are interesting for families. Take this self-guided tour to visit family friendly attractions in Coimbra.
How it works: Download the app "GPSmyCity: Walks in 1K+ Cities" from iTunes App Store or Google Play to your mobile phone or tablet. The app turns your mobile device into a personal tour guide and its built-in GPS navigation functions guide you from one tour stop to next. The app works offline, so no data plan is needed when traveling abroad.

The Academic Museum represents the spirit of this Portuguese 'Oxford' city. It is housed in the building of the ancient college of St. Jerome. It was created by professors of the Academic Association. There are famous Coimbra fado music instruments on display. Fado is a type of traditional music that originated in Coimbra. You can see also records, photographs and other documents relating to studies in Coimbra. There are plaster figurines caricaturing some famous local persons. There are hand painted old pieces of china and works made by students based on academic traditions, among other things.
Image by Gene Markey on Wikimedia under Creative Commons License.
2

Casa Museu Bissaya Barreto is a fascinating little museum located near the Botanical Garden. It offers a unique and really interesting experience as there are some different things to see. Bissaya Barreto was a surgeon from Coimbra, as well as a scholar and a man passionate about fine arts. His wonderful 19th-century mansion was transformed into a museum. His house is full of Portuguese sculptures and paintings, Chinese porcelain and other fine art objects.
Image by Domingos António de Sequeira on Wikimedia under Creative Commons License.
3

The first part, located at the highest level of the Garden and at the top of the valley, constitutes the most formal area and it is divided in terraces. The lower terrace, known as the Quadrado Central (The Central Square) is the most primitive part of the garden and is decorated as other European Gardens of the 18th Century. In this terrace, adorned with a fountain from the 1940s, some trees planted during the time of Brotero can still be seen, such as: Cryptomeria japonica, Cunninghamia sinensis and Erythrina crista-galli.

The second part of the Garden, including the valley where once a small stream flowed, is the Arboretum, usually known as Mata of the Botanical Garden. Here we can observe, alongside with the Monocotyledoneae collection, a splendid forest of bamboos and a dense vegetation with exotic trees. In the Arboretum holds an excellent collection of Eucalyptus, about 51 species.

Image by Portuguese_eyes on Wikimedia under Creative Commons License.
Sight description based on wikipedia
4

Parque Verde do Mondego is a park on the bank of the river completely dedicated to leisure. It is a nice place to go with children. The entrance to the park starts from the terraces, built on a wooden platform over the river. There are different activities for kids, for example, they can ride small motor cars or play in the playground, equipped with the most modern toys. You can visit many pavilions in the park with temporary art exhibitions. There are cafes with seats on the terraces and you can have dinner there while enjoying the views of the river and the park.
Image by Portuguese_eyes on Wikimedia under Creative Commons License.
5

5) Pedro and Ines Footbridge (must see)

The Pedro e Inês bridge is a footbridge opened in 2007 in the University town of Coimbra. It is designed by Cecil Balmond. Spanning the Rio Modego, the 600 ft structure marks the city's first footbridge and has become locally known as the "bridge that doesn't meet." The bridge is called Pedro E Ines in reference to one of Portugal's greatest love stories." Pedro, the Crown Prince of Portugal in fourteenth century was wed to Queen Constance of Castile. He fell in love with the Queen¹s lady-in-waiting, Ines de Castro. The lovers had a forbidden relationship that bore four illegitimate children. King Afonso IV wanted to stop the affair and sent three assassins in 1355 to murder Ines. Like the bridge's two halves that never meet, these star-crossed lovers were fated to never be together.

The form pushes the limits of structural dynamics. Partly inspired by skipping stones, ” the design is created from two cantilevered walkways, joining in the middle to form a viewing platform”. Each walkway is responsible for supporting the other - the two halves are displaced, giving the visual effect of a bridge that does not meet. The bridge, "appears at first glimpse to be impossible," so states Wallpaper magazine. The balustrade is made from a clear, fractal pattern crafted in coloured blue, pink, green and yellow glass". The bridge was done with Portuguese based civil engineer, António Adão da Fonseca.

Portugal dos Pequenitos is a theme park translated as Portugal for the Little Ones. The nation's masterpiece of art, architecture and folklore are made in miniature sets. It was built by Professor Dr. Bissaya Barreto and architect Cassiano Branco. It is dedicated to children of all ages and they can learn there while playing. There are monuments made in small sizes and installed in the playgrounds for kids; the most significant buildings are made small so that kids can enter and explore. There are also pavilions that show former Portuguese colonies. Portugal dos Pequenitos was established in 1940.
Image by Lampiao3 on Wikimedia under Creative Commons License.

Coimbra is the Portuguese Oxford and its student population guarantees an energetic nightlife. The majority of bars are located around the Old Cathedral. There are always many students and professors drinking and entertaining. In the bars, you will hear late-night fado, a famous Portuguese guitar. This self-guided tour will lead you to the hottest nightspots in Coimbra.