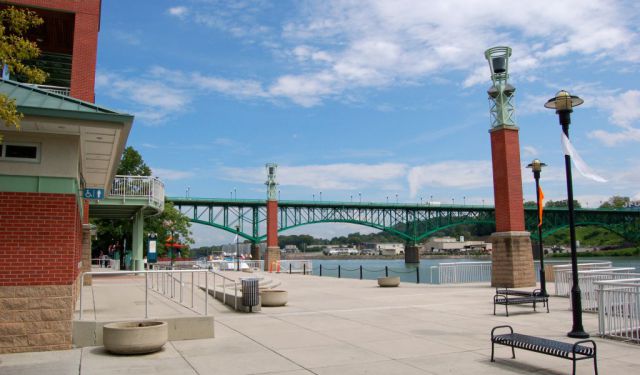 Image by Brian Parton on Flickr under Creative Commons License.

Downtown Knoxville is the best place to take a lovely daytime stroll. The following tour of attractions includes children’s favorites the Candy Factory and Fort Kid and several other family-oriented landmarks and entertainment venues.
How it works: Download the app "GPSmyCity: Walks in 1K+ Cities" from iTunes App Store or Google Play to your mobile phone or tablet. The app turns your mobile device into a personal tour guide and its built-in GPS navigation functions guide you from one tour stop to next. The app works offline, so no data plan is needed when traveling abroad.

Fort Kid is a spacious playground located opposite the Museum of Art. Established by local activists in the early 1990s, children will love its wooden labyrinth, tunnels, swings, nooks and other exciting structures. This wonderful landmark is a popular attraction for both locals and tourists.
Image by Jackie Winner on Flickr under Creative Commons License.
2

This complex of Victorian Houses, located opposite the Candy Factory, were built in the early 20th century. Carefully restored for the 1982 World’s Fair, it is home to several curio shops, cafes, galleries of local art and antique stores. Visitors of all ages are sure to find something special here.
Image by the Italian voice on Flickr under Creative Commons License.
3

The Candy Factory was constructed at the beginning of the 19th century near the present World’s Fair Park. Established as a candy factory, it was closed soon after, serving as a warehouse until the 1982 World's Fair when it was restored. Today it houses the South's Finest Chocolate Factory, as well as changing monthly exhibits of local and regional artists.
Image by maplesbranch on Flickr under Creative Commons License.
4

Tomato Head, located on Market Square for a long time, is one of downtown Knoxville’s most reputable eateries. Serving pizza and gourmet cuisine restaurant, its menu includes kid-friendly and vegan dishes. Featuring American and Indian cuisine made from the freshest ingredients, this popular attraction has a prompt and courteous staff and a gift shop.
Image by Maj-Lis Andersen on Flickr under Creative Commons License.
5

If you a searching for great gifts, be sure to visit the family-run Earth to Old City on Market Square. Offering a wide range of unique local products, you can find anything from jewelry to funky lamps here. Its staff is friendly and its variety of merchandise can be found nowhere else in Knoxville.
Image by mulmatsherm on Flickr under Creative Commons License.
6

Opened in 2007, Regal Cinemas Riviera Stadium 8 is located on Gay Street on the site of the historic Riviera Theatre, which was demolished in 1988. Its architecture is reminiscent of old cinema designs. Operated by the Regal Entertainment Group, this excellent entertainment facility has eight screens and nearly 2,000 seats.
Image by Brian Stansberry on Wikimedia under Creative Commons License.
7

Built in 1909 as an addition to the Lamar House Hotel, the Bijou Theatre has at various times served as performance venue for traditional theatre, vaudeville, a second-run moviehouse, a commencement stage for the city's African-American high school, and a pornographic movie theater. The Lamar House Hotel, in which the theater was constructed, was originally built in 1817, and modified in the 1850s. The building and theater were added to the National Register of Historic Places in 1975.

The Lamar House Hotel was built by Irish immigrant Thomas Humes (1767–1816) and his descendants, and quickly developed into a gathering place for Knoxville's wealthy. During the Civil War, the Union Army used the hotel as a hospital for its war wounded. Following the war, the hotel became the center of Knoxville's Gilded Age extravagance, hosting lavish masquerade balls for the city's elite. In 1909, the rear wing of the building was replaced by the Bijou Theatre structure, entered through a new lobby cut through the hotel building from Gay Street.

Image by Brian Stansberry on Wikimedia under Creative Commons License.
Sight description based on wikipedia
8

Located in the Volunteer Landing Marina on the riverside, Gateway Regional Visitor Center was established in the late 1990s. Its exhibitions highlight such subjects as the mineral wealth of the Southern Highlands, Knoxville’s history and achievements, technological resources, regional geology and wonders of the Tennessee Valley.
Image by See-ming Lee 李思明 SML on Flickr under Creative Commons License.
9

The Holston Treaty Monument was erected in 1908 in honor of the treaty between the U.S. and the Cherokee Nation on July 2, 1791. Tennessee governor and superintendent of Native American affairs William Blount, one of the drafters of the treaty, resided nearby. Soon after the treaty was signed the regional capital moved to the newly founded Knoxville. The Holston Treaty Monument depicts several participants involved in its signing, both Cherokee and American.
Image by Nfutvol on Wikimedia under Creative Commons License.
10

Stretching along the scenic riverside, the Volunteer Landing Marina was established in the late 1990s. It features beautiful landscaping and lighting, as well as memorial stones along the paths detailing historical facts. It houses a visitor center, the Stair Tower, restaurants, the Star of Knoxville riverboat and much more. It hosts various city events and has a family-friendly atmosphere with picnic tables and a playground.
Image by Ken Redmond on Flickr under Creative Commons License.

Knoxville is home to many great bars and clubs to hang out, many of them concentrated in the Old Town district. Take the following tour to discover some of the most vibrant places in the city, including the Sapphire, Hanna's Café, Patrick Sullivan's, Preservation Pub and more.

Knoxville County is home to nearly 100 listed historic properties and districts, representing the area’s prestigious and rich history. Check out the following tour of the most prominent historic and architectural gems Knoxville has to offer.

Knoxville is home to many historic and cultural attractions, places of interest including World’s Fair Park, Market Square, Gay Street, stunning skyscrapers, the Convention Center and more. Take the following tour to become better acquainted with the best sites Knoxville Downtown has to offer.

Knoxville is home to over 450 churches of many religious denominations. Situated at the core of the Bible Belt, many of them are Protestant. The following tour highlights the city’s most impressive religious sites, including Knoxville’s first churches and other historically significant ones.