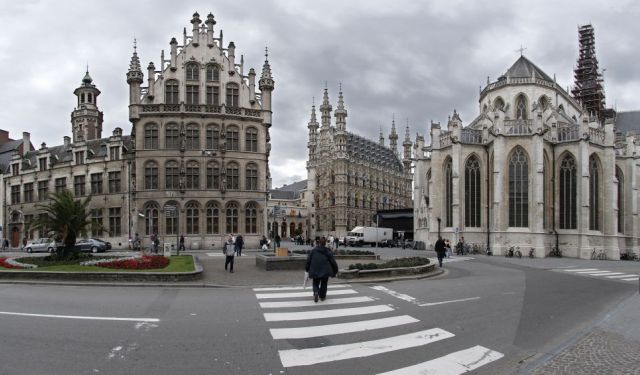 For tourists looking to find the most remarkable Medieval buildings in the world, they should just visit Leuven. The town is the seat of the most impressive architecture in all of Belgium, the imposing University Library and the splendid Town Hall, which is home to numerous early Flemish figures. Take this tour and admire the beauty of Leuven architecture.
Image Courtesy of Wikimedia and Wouterhagens.
How it works: Download the app "GPSmyCity: Walks in 1K+ Cities" from iTunes App Store or Google Play to your mobile phone or tablet. The app turns your mobile device into a personal tour guide and its built-in GPS navigation functions guide you from one tour stop to next. The app works offline, so no data plan is needed when traveling abroad.

Founded in 1129, the park is one of the oldest and most amazing pieces of ecclesiastical architecture in Leuven. It is a special patrimonial estate with a large green land and it was Geoffrey the Bearded who owned this area as parkland and began the original building on this place. In coming centuries, the design of the construction has changed again and again, with Gothic, Romanesque and Classical influences being bestowed upon it.
Image Courtesy of Wikimedia and Athenchen.
2

The Grand Béguinage of Leuven is a well preserved and completely restored historical quarter containing a dozen of streets in the south of downtown Leuven. About 3 hectares (7.5 acres) in size, with some 300 apartments in almost 100 houses, it is one of the largest still existing beguinages in the Low Countries. The béguinage stretches on both sides of the river Dijle, which splits into two canals inside the béguinage, thus forming an island. Three bridges connect the parts of the beguinage. The complete béguinage is owned by the University of Leuven and used as a campus, especially for housing students and academic guests.

The Grand Béguinage of Leuven has the appearance of a small town on its own, with houses planned along a network of narrow streets and small squares. The majority of the houses dates back from the period 1630-1670. They were constructed in the local, traditional architecture, enriched with some sober, baroque elements. The facades show red bricks with sandstone cross-bar frames for windows and doors. A typical element in the beguinage of Leuven are the numerous dormers, often elaborated with crow-stepped gables and round arched windows.

Image Courtesy of Wikimedia and Snowdog.
Sight description based on Wikipedia.
3

The University Library was designed by the American architect Whitney Warren in a neo-Flemish-Renaissance style, and built between 1921 and 1928. Its monumental size is a reflection of the Allied victory against Germany, and it is one of the largest university buildings in the city. The library's collections were rebuilt with donations from all around the world, outraged by the barbaric act which it had suffered.

In 1940, during the second German invasion of Leuven, the building largely burnt down, including its 900,000 manuscripts and books. The blaze is thought to have started in an exchange of fire between the two armies, rather than a deliberate act. The building was rebuilt after the war in accordance with Warren's design.

Image Courtesy of Wikimedia and Snowdog.
Sight description based on Wikipedia.
4

Dating from shortly after the First World War, the construction of the Marshall Fochplein is a square situated in the very centre of the city. The square was named after the French Marshal Ferdinand Foch and is the connection between the Allies Avenue, the Tiensestraat, Market Square and Margaret. It is also dominated by the St. Peter’s Church and the statue of Fonske.
Image Courtesy of Wikimedia and Wouterhagens.
5

Built in 1817, the Round Table is the third most important building situated on the Main Market square. The construction is a traditional building that has been part of the city central square since the 15th Century. The original structure was destroyed in the late 19th Century. However in 1921, the National bank decided to restore and rebuild the original Gothic structure as a meeting place for burghers, guilds and drama societies. The renovation after the First World War brought the old building back to life.
Image Courtesy of Wikimedia and Michiel1972.
6

The building today known as the Town Hall was the Voirste Huys (front house) of a larger complex of municipal buildings on which construction started in 1439 at the site of an existing town hall. The Town Hall has three main stories, lined with pointed Gothic windows on the three sides visible from the Markt. Above is a gallery parapet, behind which rises a steep roof studded with four tiers of dormers. At the angles of the roof are octagonal turrets pierced with slits allowing for the passage of light. The main façade has an entrance staircase, and two portals in the center, above which are figures of Saint Peter (left) and Madonna and Child (right), the former in compliment to the patron of the church opposite. The interior accommodates an interesting collection of artwork, including sculptures by Constantin Meunier and Jef Lambeaux. Inside can also be seen the portraits of the Leuven mayors since 1794.
Image Courtesy of Wikimedia and Michiel1972.
Sight description based on Wikipedia.
7

Erected in 1783, the herbal domain was initially created by Leuven University for medical students. It presents a botanical school and a garden which includes more than 800 plants of different species. In 1819, another botanical garden was created next to the current location. In 1835, the land was given to the city and in 1982, the orangerie was restored to its original condition and a tropical greenhouse was built here. Besides the scientific and cultural value of the plant collection, tourists will enjoy the heavenly beauty of the place.
Image Courtesy of Wikimedia and Wouter Hagens.
8

The Small Beguinage is a neighborhood including one street and two green alleys north of St. Gertrude the abbey. This area was inhabited by nuns until the 19th century. This beautiful small street of houses was set aside for those who wanted to consecrate their lives to prayer and contemplation at the service of God. The buildings are still in place and range in age from the 16th to the 18th century.
Image Courtesy of Flickr and twiga_swala.