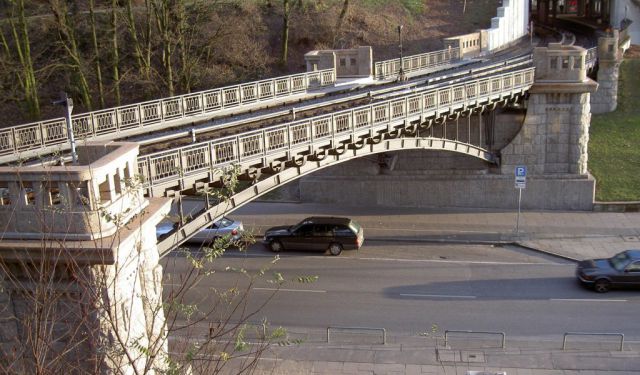 Image by Heidas on Wikimedia under Creative Commons License.

It appears that Hamburg made the Guinness Book of Records as the city with four and a half thousand bridges. This is more than Venice, Amsterdam and London put together! Take this tour to enjoy the unique design and history of Hamburg's bridges!
How it works: Download the app "GPSmyCity: Walks in 1K+ Cities" from iTunes App Store or Google Play to your mobile phone or tablet. The app turns your mobile device into a personal tour guide and its built-in GPS navigation functions guide you from one tour stop to next. The app works offline, so no data plan is needed when traveling abroad.

The Lombard Bridge is a road and rail bridge over the river Alster in Hamburg. It was named after the Lombard pawn shop situated here in 1651. The original wooden bridge was replaced in 1865. The 69-meter long bridge spans the river Alster in three arches between Inner and Outer Alster.
Image by Wmeinhart on Wikimedia under Creative Commons License.
2

This bridge crosses the Kleine Alster (Little Alster). It was built in 1843. The name of the bridge comes from the corn mill's owner, and was situated here centuries ago. People are attracted to this bridge to get a wonderful view of the river with the swans, to whom they can feed a piece of bread.
Image by SKopp on Wikimedia under Creative Commons License.
3

The Trostbrucke is a small, historic bridge which crosses the Nikolaifleet, one of many narrow inlets connecting the city’s docklands to the River Elbe. Located to the south west of the city centre, it once marked the boundary between Hamburg’s old and new towns. The city has expanded to the south since then, but the two statues on the bridge celebrate the ancient and modern founders of the city. They are Bishop Ansgar, the founder of the cathedral, which was once found in the old town, or Aldstadt; and Count Adolf III von Schauenberg, who created the new town, or Neustadt.

The bridge is made of stone, and comprises a single arch, with the two statues set in the centre, facing towards each other from either side. The Neustadt area was originally built to accommodate merchants in the city’s maritime heyday. The bridge was completed during this prosperous era, and opened to the public in 1881. Trostbrucke translates as ‘comfort bridge’. Whilst nobody knows for certain, it is believed that it earned its name as a picturesque point on criminals’ journeys to the local courthouse. It’s said that for many, the view of the river was the last comfort to them before they were sent to the gallows.

Image by GeorgHH on Wikimedia under Creative Commons License.
4

The Heiligengeistbrucke, bridge of the Holy Spirit, got its name from the ensemble of hospitals, monasteries and fortresses by the name of Holy Spirit, located in the vicinity in the Middle Ages. It is richly decorated with sculpted reliefs and elegant iron chandeliers.
Image by Staro1 on Wikimedia under Creative Commons License.
5

One of the lesser-known bridges is the Slamatjenbrücke in the district of Neustadt at the Ludwig-Erhard Street, which crosses the Alster. Since its completion in 1959, it has served as a road bridge. It contains the stone relief of two talking women, which is really worth seeing. The bridge's name comes from the the meeting place of the women who were carrying water in the 17th century.
Image by By Joost J. Bakker IJmuiden on Flickr under Creative Commons License.
6

Überseebrücke is literally translated as the Ocean Bridge; it is located at the St. Pauli's jetties. This covered bridge was built in 1930 and rebuilt after World War II. It serves as the main access to the port, where the museum ship Cap San Diego is stationed.
Image by Gunnar Ries on Wikimedia under Creative Commons License.
7

The Landungsbrücken, or Landing Bridges, are found on the northern banks of the River Elbe in St. Pauli, one of Hamburg’s 109 ‘quarters’. St. Pauli is an inner city area lying north west of Hamburg city centre. In addition to the Landungsbrücken, which are one of the city’s great landmarks, this bohemian district is known for the Reeperbahn, Hamburg’s gritty red light district, as well as St. Pauli FC, the famously left leaning football club. The Landing Bridges are a transport hub for the area, linking S-Bahn (trams) and U-Bahn (subway) services with river boats to the city centre and docklands.

The Landungsbrücken are a docking complex comprising several floating piers, connected by movable bridges. They were constructed to allow large steam ships to dock as close to the city centre as possible. The first pier was built in 1839, with the current layout, including the historic terminal building, completed by 1909. Bombing during World War II destroyed many of the original pontoons, which were replaced after the war. At the eastern end of the complex, the Pegelturm, or water level tower, has a tide indicator built into its wall. This distinctive feature was used to help guide steam ships into port along the River Elbe.

Image by Tilo 2007 on Flickr under Creative Commons License.
8

The construction of the Kersten-Miles-Brücke in Hamburg in the district of New Town dates back to 1895-1897. It is named after the former mayor of Hamburg, Kersten Miles. The bases of the bridge include Miles Kersten and three other statues of personalities from ancient Hamburg.
Image by Jan Arkesteijn on Wikimedia under Creative Commons License.