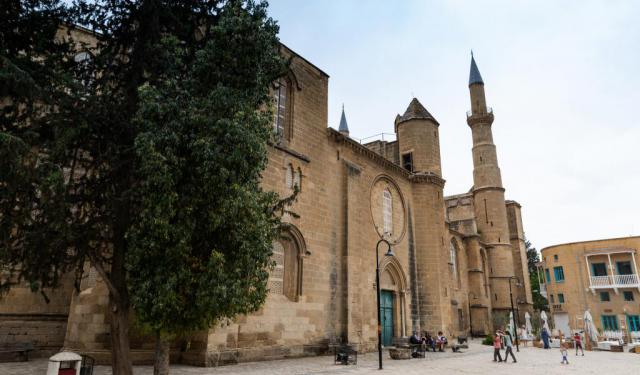 Image by dronepicr on Flickr under Creative Commons License.

Nicosia is rich in beautifully designed mosques, each of them with its own fascinating history. Some of them were built from churches and monasteries and these remaining elements add a special charm. Nicosia’s multitude of mosques is an indispensable part of the city panorama. Take the following tour to discover the Muslim spirit reflected in the city’s mosques.
How it works: Download the app "GPSmyCity: Walks in 1K+ Cities" from iTunes App Store or Google Play to your mobile phone or tablet. The app turns your mobile device into a personal tour guide and its built-in GPS navigation functions guide you from one tour stop to next. The app works offline, so no data plan is needed when traveling abroad.

Arabahmet Mosque, located in the Turkish part of the Old Town of Nicosia, was built in honor of Ahmet Pasha, a famous Ottoman commander from the 16th century. Built on the former site of a Latin church, the mosque’s architecture is quite unique for this area. Designed in the Anatolian style, with domes on a square structure, since its construction its most significant renovation took place in 1845. It contains the tombs of several figures important to the history of Cyprus, a fountain and a number of beautiful exotic trees.
Image by Ewa Dryjanska on Wikimedia under Creative Commons License.
2

Sarayonu Mosque, built in 1824, is a popular site for local weddings. Constructed on the site of a beautiful Latin church from the Byzantine era, it was initially called Ordu Onu Mosque and was devastated by the earthquake of 1902. The following year, it was rebuilt and given the present name. It is a lovely picturesque Ottoman style structure with a minaret and arches.
Image by Andrew Levey on Flickr under Creative Commons License.
3

Turunçlu Fethiye, established by Ottoman governor Seyit Mehmet Ağa in 1825, has a minaret with a balcony around it and the sign of the moon and star on top. Morning prayers are recited through a speaker on the balcony. It also contains a beautifully decorated wooden gallery reserved for Muslim women.
Image by Lara Zajic on Flickr under Creative Commons License.
4

Iplik Pazari Mosque, also known as Iplik Bazaar Mosque, is a small structure built on the site of a once popular cotton market. Constructed in the 18th century, using the minaret from Haci Ahmet Aga Mosque, it was constructed of plastered sandstone. Its beautiful interior contains arches and detailed wooden adornments. It underwent major renovations in 1826 and 1899.
Image by A Gude on Flickr under Creative Commons License.
5

Laleli Mosque, built to replace a once grand medieval chapel, once had a splendid ornate Ottoman minaret and a tulip (laleli) made of lead. Because of its poor condition, the historic minaret was demolished and rebuilt. In 1828 Ali Ruhi created a fountain for this mosque, beautifully ornamented with bushes and trees.
Image by ~ iSυмача on Flickr under Creative Commons License.
6

Yenicami Mosque, which translates as "new mosque,” despite its name was constructed in 1571 to replace a 13th century Latin Gothic church. Like many mosques in Nicosia, it was built in the Ottoman Gothic style. Next to the structure are four tombs belonging to the family of the city’s first Ottoman judge. In 1979 the minaret was demolished and rebuilt.
Image by Steve Ding on Flickr under Creative Commons License.
7

Selimiye Mosque, or Agia Sofia Cathedral, is located in the Turkish controlled northern part of the walled city of Nicosia. It is the main mosque in the city. It is housed in the largest and oldest surviving gothic church in Cyprus (interior dimensions: 66 X 21 m) possibly constructed on the site of an earlier Byzantine church. The building belongs to the pure Gothic style of the beginning of the 12th century.

Due to the building’s large scale, lack of money and various historical events it took 150 years for the cathedral to be built and still, it was never entirely completed since the southwest tower and the portico’s upper floor were never constructed. The cathedral’s first construction phase began during the first years of Frankish rule (possibly in 1209) and already by 1228 the eastern part of the building was completed. By the end of the 13th century the side aisles and a large part of the middle aisle were completed.

Image by Ondřej Žváček on Wikimedia under Creative Commons License.
Sight description based on wikipedia
8

Omeriye Mosque is a unique mosque transformed from a Gothic style church in the Greek portion of Nicosia. Initially, in 1395, it was built as the Latin monastery of St. Mary of the Augustinians. In the 15th century a smaller Renaissance style building was attached, meant as a hospice for pilgrims, and was nearly destroyed during the Ottoman invasion. In 1571 the monastery was converted into a mosque and was named in honor of Omer, a Muslim prophet. Omeriye Mosque is a very important landmark in Nicosia, its 14th century main entrance being its most beautiful element.
Image by Chris06 on Wikimedia under Creative Commons License.