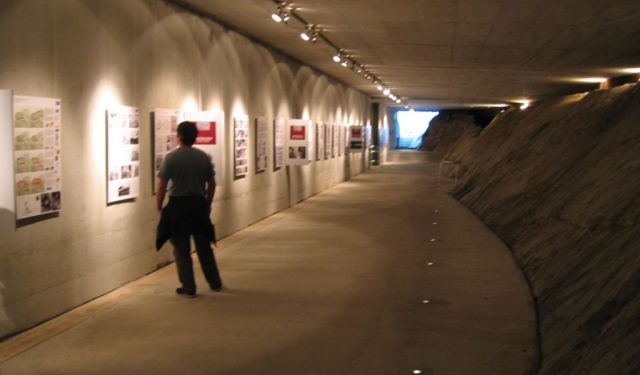 Image by Ziga on Wikimedia under Creative Commons License.

One of the best ways to discover the rich heritage of Slovenia is to pay a visit to the local museums. However, if you've had enough of history, you can always escape to a more unusual place, like the Museum of Brewery, for example. Sounds interesting? Then take this tour and have fun in Ljubljana's museums.
How it works: Download the app "GPSmyCity: Walks in 1K+ Cities" from iTunes App Store or Google Play to your mobile phone or tablet. The app turns your mobile device into a personal tour guide and its built-in GPS navigation functions guide you from one tour stop to next. The app works offline, so no data plan is needed when traveling abroad.

This small museum dedicates itself to the important mission of revealing the history of tobacco in Europe and Slovenia, in particular. The museum is housed in Ljubljana's first tobacco factory opened back in 1871. Here, you will see different machines used in the production of cigarettes, documents regarding the history of tobacco in Ljubljana and, of course, the famous diorama of two 19th-century women rolling the renowned Ljubljana Virginia cigars.

Image by Reinhard Kirchner on Wikimedia under Creative Commons License.
2

2) National Museum of Slovenia (must see)

The National Museum of Slovenia is situated in Ljubljana's center, near Tivoli Park. Along with the Slovenian Museum of Natural History, located in the same building, the National Museum of Slovenia is the country's oldest scientific and cultural institution. The museum has an extensive collection of archaeological artifacts, old coins and banknotes (in the numismatics department on the ground floor), as well as some applied arts exhibits. The museum was founded in 1821 and was known initially as the "Estate Museum of Carniola". The current building, designed in a Neo-Renaissance style by Slovene architect Viljem Treo, was built between 1881 and 1885. The interior decorations were made by painters Janez and Jurij Šubic.

Image by Ziga on Wikimedia under Creative Commons License.
Sight description based on wikipedia
3

The Slovenian Museum of Natural History lives up to its name in featuring the natural history, scientific, and educational content. It is the oldest cultural and scientific Slovenian institution emanating out of the Carniolian Museum, founded in 1821. Its research activities focus on the natural heritage of Slovenia. Situated in the central district of Ljubljana, near Tivoli Park, the Parliament and the Opera House, it shares premises with the National Museum of Slovenia.

The International Centre of Graphic Arts was established in 1986 to give the international Ljubljana Biennial of Graphic Arts - which itself has a longer, uninterrupted tradition from 1955 - its own place. The museum has a rich collection of prints by international modernist artists, which consists of more than four thousand items. Besides its main collection, the museum has a Collection of Prints and Original Printed Ephemera established in 2000, consisting of posters, fanzines and other items, including all artistic newspaper projects of the Vienna museum.

Operation hours: Tuesday - Sunday: 10 am - 6 pm
Image by Ziga on Wikimedia under Creative Commons License.
Sight description based on wikipedia
5

The National Museum of Contemporary History is located in a mansion on the edge of Tivoli Park in the district of Šiška, traditionally known as the Cekin Mansion (Cekinov Grad). The mansion was built between 1752 and 1755 by order of Count Leopold Lamberg. During the last years of the French occupation of Ljubljana, in 1812-1813, the mansion was used as a temporary residence by Eugene de Beauharnais, the Viceroy of Italy and commander of the Napoleonic armies in the Illyrian Provinces. Since 1990, the museum has been dedicated to the 20th century Slovenian history, featuring collections on World War I, World War II, the Socialist period, and the establishment of the independent state of Slovenia. Every first Sunday of the month, admission is free for all visitors.

Operation hours: Tuesday - Sunday: 10 am - 6 pm, Thursdays between June and August 10am – 8pm (excluding public holidays, with the exception of February 8, the Slovenian Cultural Holiday).
Image by Ziga on Wikimedia under Creative Commons License.
Sight description based on wikipedia
6

With a history of over 150 years now, the Union Brewery has been famous among the locals for its beer's outstanding quality and excellent taste. For the curious, the company opened a museum, sharing the building with the factory itself. The Brewery Museum gives insight into the beer-making process, and showcases the various machines used in it, from the oldest ones to the latest hi-tech. The museum also provides tours of the factory with beer tasting sessions included.