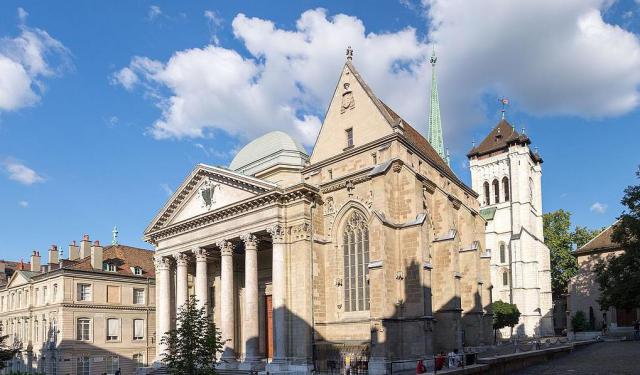 Image by Yann on Wikimedia under Creative Commons License.

Geneva’s spiritual life boasts a great number of religious sites that are of historic and cultural value to the city. The city is also the place where the reformist movement started to grow, having theologian Jean Calvin as its leader. Take this tour, whether you are a keen church goer or simply interested in places of spirituality, and visit the most important religious sites of Geneva.
How it works: Download the app "GPSmyCity: Walks in 1K+ Cities" from iTunes App Store or Google Play to your mobile phone or tablet. The app turns your mobile device into a personal tour guide and its built-in GPS navigation functions guide you from one tour stop to next. The app works offline, so no data plan is needed when traveling abroad.

The Eglise Russe (Russian Church) was built at the beginning of the 19th century, thanks to the great number of orthodox priests residing or studying in Geneva at that time, and generous donations made by the Russian Grand Duchess Anna Fiodorovna. This place of worship features a Byzantine design, and consists of bright golden onion domes and striped arches. The Church holds services in Russian, Bulgarian, Serbian, and other languages.
Image by Abraham Del Pozo on Wikimedia under Creative Commons License.
2

The Calvin Auditorium or Calvin Auditory (French Auditoire de Calvin), originally the Notre-Dame-la-Neuve Chapel, is a chapel in Geneva, Switzerland which played a significant role in the Protestant Reformation. It is associated with John Calvin, Theodore Beza and John Knox. The auditorium lies directly adjacent to Geneva's St. Pierre Cathedral in the Place de la Taconnerie. The austere Gothic-style building was constructed in the 15th century, on the site of earlier 5th-century religious buildings, and originally dedicated to Notre-Dame-la-Neuve. From 1536, the time of Geneva's Reformation, it became a lecture hall where Calvin actively expounded his reformed theology: Bible studies were conducted here at 7:00 each morning. In 1559, it served as the original home of the University of Geneva. Once Geneva accepted the Reformation, it became a haven for Protestant refugees from all over Europe, and Calvin gave this building over for them to worship in their own language. It was also used by the Scottish reformer John Knox, during his exile in Geneva in the 1550s. Here he ministered to an English-speaking refugee congregation and developed many of the ideas that were to be influential in the Scottish Reformation. Subsequently, it became a place used by numerous Protestant refugee groups including Italian Waldensians, Dutch Reformed and Scottish Presbyterians. It is viewed by many Reformed churches throughout the world as a crucible of their faith. Today, this protestant chapel still offers sermons in French, English, Dutch, German, Italian and Latin.
Image by Doc glasgow on Wikimedia under Creative Commons License.
Sight description based on wikipedia
3

Image by Attila Nóbik on Wikimedia under Creative Commons License.
Sight description based on wikipedia
4

The Eglise Saint-Germain is one of seven historic parishes of the city of Geneva. The actual building dates from the 15th century, and was initially a protestant church. In 1873, during the French occupation, it was turned into a Catholic church. The church is also known for its classical outdoor concerts during Summertime.
Image by rene boulay on Wikimedia under Creative Commons License.
Sight description based on wikipedia
5

The Temple de la Fusterie is distinguished from other churches as the first religious building specifically established for Calvinist worship. The Temple was opened for protestant masses in 1715, and has enjoyed great popularity for many years. The building features Baroque style architecture with a big clock on the top.
Image by Unomano on Wikimedia under Creative Commons License.
6

The Temple Saint-Gervais is located in an old quarter of Geneva, called Saint Gervais. The initial church underwent some major improvements in the 17th century and was rebuilt in a Gothic style, funded with donations from local watchmakers, jewelers and goldsmiths, who lived in the area.
Image by Moumou82 on Wikimedia under Creative Commons License.
Sight description based on wikipedia
7

The Basilique de Notre-Dame is the main Catholic church in Geneva. It was built according to the design of Alexandre Grigny between 1852 and 1857 on the site of a former stronghold fortifications. This neo-Gothic building, whose appearance is partly inspired by the Beauvais Cathedral, could break ground thanks to the city of Geneva, which had ceded land to religious communities to build places of worship, and through donations and manual labor provided by the Geneva Catholics.

The statue of Our Lady of Geneva, offered by the Pope Pius IX, is venerated; however, it's the basilica's stained glass windows that are particularly remarkable. Some are semi-industrial production neo-gothic, but most show the evolution of the art of stained glass during the twentieth century, in various styles, after those of Claudius Lavergne (installed from 1857 to 1875). From 1912, several artists have successively contributed to adorn the basilica: Charles Brunner, Alexandre Cingria, Maurice Denis, Gherri Moro, Paul Monnier, Jean-Claude Morend, Théodore Strawinsky. The building is classified as Cultural Property of National Significance.

Image by Gfuerst on Wikimedia under Creative Commons License.
Sight description based on wikipedia
8

The Eglise de la Sainte-Trinité is considered to be very much like a village church in England. The English Church, as known by the locals, appeared as a result of the large number of Anglicans that came to Geneva in the 16th-17th century and were in need of a place of worship. The holy building is situated on one of the central streets of Geneva, and this makes it a much-visited place for the English-speaking community in the city.
Image by yann on Wikimedia under Creative Commons License.

The night life scene of Geneva offers a variety of venues for a nice evening out, and a unique and spectacular experience. The majority of the bars and pubs are located in the downtown area and are available from the late evening into the early hours of the morning. Take this tour if you are looking for a memorable night out, and a place to relax and enjoy yourself in the city of Geneva