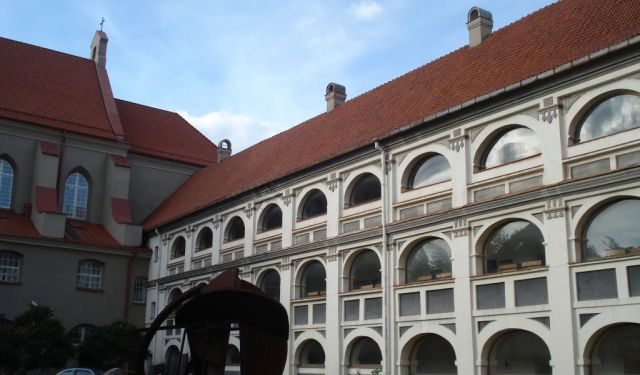 Image by Alma Pater on Wikimedia under Creative Commons License.

The architecture of Vilnius is very beautiful and diverse. Europe's greatest architectural styles such as Gothic, Renaissance, Baroque, and Neoclassical blend perfectly in the capital of Lithuania. Visitors will instantly recognize such landmarks as Gate of Dawn, Gediminas Tower, and Presidential Palace.
How it works: Download the app "GPSmyCity: Walks in 1K+ Cities" from iTunes App Store or Google Play to your mobile phone or tablet. The app turns your mobile device into a personal tour guide and its built-in GPS navigation functions guide you from one tour stop to next. The app works offline, so no data plan is needed when traveling abroad.

The Gate of Dawn was built between 1503 and 1522 as a part of defensive fortifications for the city of Vilnius, the capital of the Grand Duchy of Lithuania. Of the nine city gates, only the Gate of Dawn remains, while the others were destroyed by the order of the government at the end of the 18th century. In the 16th century city gates often contained religious artifacts intended to guard the city from attacks and to bless travelers. The Chapel in the Gate of Dawn contains an icon of The Blessed Virgin Mary Mother of Mercy, said to have miraculous powers. For centuries the picture has been one of the symbols of the city and an object of veneration for both Roman Catholic and Orthodox inhabitants.
Image by sfu on Wikimedia under Creative Commons License.
Sight description based on wikipedia
2

Vilnius Town Hall is a historical town hall in the square of the same name in the Old Town of Vilnius, Lithuania. The town hall in Vilnius was mentioned for the first time in 1432. Initially it was a Gothic style building, and has since been reconstructed many times. The current Vilnius Town Hall was rebuilt in neoclassical style according to the design by Laurynas Gucevičius in 1799. It has remained unchanged since then. Its Gothic cellars have been preserved and may be visited. Nowadays it is used for representational purposes as well as during the visits of foreign state officials and rulers, including George Walker Bush and Queen Elisabeth II.
Image by arz on Wikimedia under Creative Commons License.
Sight description based on wikipedia
3

It is said that in Vilnius existed a Lutheran community since 1553. Due to this fact, in 1555 was build an Evangelical Lutheran Church and was set in a courtyard. This little church combines two elements: the Gothic and the Baroque one. Inside one can see a gorgeous Rococo altar, built by Glaubitz in 1741. This altar has been recently restored and its simplicity and beauty shouldn't be missed.
Image by Juliux on Wikimedia under Creative Commons License.
Sight description based on wikipedia
4

Tyzenhaus palace was probably constructed by a Venetian architect Giuseppe de Sacco. His owner Tysenhaus went bankrupt and the palace fell into disuse. After his death in 1785, General Fitinhof's widow, bought the palace in 1789 and the next year she ordered its reconstruction. The work was most probably carried out by German-born architect Martin Knakfus. After the reconstruction, the palace had 30 halls and 16 smaller rooms; and was one of the biggest aristocratic residences in Lithuania. The palace has 3 floors on the street side and 4 floors on the courtyard side. The courtyard is fully enclosed by the building and is accessible through 2 gates, one on each of the adjacent streets. The palace is of trapezoid form. On the street side, the building has a tall attic. It has 2-level Gothic cellar, which is currently unused.
Image by Alma Pater on Wikimedia under Creative Commons License.
Sight description based on wikipedia
5

Sts. Johns' Church is also called University Church as it's located on the campus of Vilnius University. The church was built in the 14th century. During the Soviet era, the church offered the Science Museum. The tower, separate from the church itself, was built in the 16th century. The belfry on Sts. Johns' Church is considered the highest church tower in the city. The layout of the Church of St. Johns still reflects its original Gothic structure. It is a 28-by-69-metre (92 ft × 226 ft) hall church with three naves and seven asymmetrical chapels. The tower is the tallest building of Vilnius Old Town
Image by Lestat (Jan Mehlich) on Wikimedia under Creative Commons License.
Sight description based on wikipedia
6

The university was founded in 1579 as the Jesuit Academy (College) of Vilnius by King of Poland and Grand Duke of Lithuania - Stephen Báthory. It was the third oldest university in the Polish-Lithuanian Commonwealth. In the aftermath of World War I the University saw failed attempts to restart it by Lithuania (December 1918) and invading Soviet forces (March 1919), and finally resumed operations as the University of Stefan Batory in Poland (August 1918), a period followed by another short Soviet occupation in 1920, and the less than two year period of the Republic of Central Lithuania, annexed by Poland in 1922. After Lithuania regained its independence in 1990, following the dissolution of the Soviet Union, it resumed its status as one of the prominent universities in Lithuania as Vilnius University.

Image by Brunswyk on Wikimedia under Creative Commons License.
Sight description based on wikipedia
7

The Palace was gradually adapted for use as a presidential office, and since 1997 it has served as the official office of the President of Lithuania. Currently, adaptations are underway to expand the palace's functions to also serve as the president's official residence. A flag displaying the coat of arms of the President is hoisted when the President is present in the Palace or in the city.

Image by Wojsyl on Wikimedia under Creative Commons License.
Sight description based on wikipedia
8

8) Royal Palace of Lithuania (must see)

The Royal Palace of Lithuania is a replica of the original palace, which once stood on this site. It was originally constructed in the 15th century for the rulers of the Grand Duchy of Lithuania. It was demolished in 1801. Work on a new palace started in 2002 on the site of the original building, and it was opened on 6 July 2009. The new palace was built for ceremonies commemorating the millennium since the first mention of the name of "Lithuania" in the year of 1009. It's definitely worth a visit. Several notable ceremonies took place in the palace, including the wedding of Duke John, who later became King John III of Sweden. The first opera in Lithuania was also staged in the palace in 1634.
Image by Poznaniak on Wikimedia under Creative Commons License.
Sight description based on wikipedia
9

Gediminas' Tower is the only remaining part of the Upper Castle in Vilnius.

The first fortifications were built of wood by Duke of the Grand Duchy of Lithuania, Gediminas. Later the first brick castle was completed in 1409 by Grand Duke Vytautas.

It is possible to climb to the top of the hill on foot or by taking a funicular. The tower houses an exposition of archeologic findings from the hill and the surrounding areas. It is also an excellent vantage point, from where the panorama of Vilnius' Old Town can be admired.

Gediminas' Tower is an important state and historic symbol of the city of Vilnius and of Lithuania itself. It is depicted on the national currency, the litas, and is mentioned in numerous Lithuanian patriotic poems and folk songs. The Flag of Lithuania was re-hoisted atop the tower on October 7, 1988, during the independence movement that was finalized by the Act of the Re-Establishment of the State of Lithuania on March 11, 1990. A reconstruction of the Royal Palace of Lithuania was completed in 2009, and is located near the base of the hill upon which Gediminas' Tower stands.
Image by Wojsyl on Wikimedia under Creative Commons License.
Sight description based on wikipedia

Since the Soviet Period, possibilities for shopping in Vilnius have vastly improved. Vilnius is now characterized as a shopping heaven, thanks to state-of-the-art shopping venues that are very popular among tourists from Eastern Europe. The most popular shopping items include jewelry, wooden handicrafts, and alcoholic beverages.