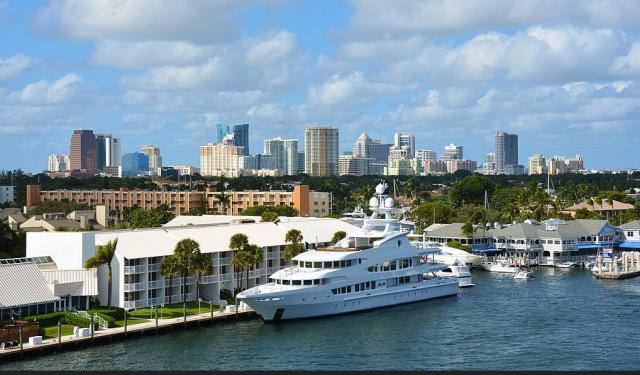 Image by Kolossos on Wikimedia under Creative Commons License.

Fort Lauderdale, also known as the “Venice of America”, is one of Florida's most attractive cities. This quintessentially Floridian city has preserved historic buildings, museums, sightseeing walks along the New River banks, and lots of navigable canals. Fort Lauderdale has become a great place to visit during spring and summer vacations.
How it works: Download the app "GPSmyCity: Walks in 1K+ Cities" from iTunes App Store or Google Play to your mobile phone or tablet. The app turns your mobile device into a personal tour guide and its built-in GPS navigation functions guide you from one tour stop to next. The app works offline, so no data plan is needed when traveling abroad.

The Broward Central Terminal is the main bus station of Fort Lauderdale and the rest of Broward County. Located in the heart of the downtown area, it's got links to all the main destinations state and country wide. The Terminal itself stands out for its so-called “Stair #1”, an elliptical, yellow roofed, black-and-white checked tile structure that serves as a visual gateway to the downtown business and entertainment area. You'll find it on the northwest corner of the station at the intersection of 1st Avenue and Broward Boulevard.
Image by Bob B. Brown on Flickr under Creative Commons License.
2

The Woman's Club is a house with great history. It was built in 1916, based on a design by architect August Geiger, as a club for women of Fort Lauderdale. The money for its construction was donated by pioneer Ivy Stranahan. The first specially designed project in the city, its Mediterranean revival style was very much in vogue at the time. The club served as volunteer society for women and children of the city, whose activities were central to the development of the community. Today the site remains a Woman's Club and also holds a small museum.
Image by Arthur Kevin McGrath on Flickr under Creative Commons License.
3

The Fort Lauderdale Museum of Art is one the most interesting places to visit in the downtown New River area. Established in 1958 in a building designed by architect E. Larrabee Barnes, the museum hosts permanent collections of modern and contemporary art, including Picasso ceramics and other European and American masterpieces, as well as contemporary art from Cuba. The museum also boasts an impressive collection of the work of American impressionist William Glackens. Open daily, except Tuesdays, the gallery also offers a regular selection of temporary exhibitions, along with various education programs offering art classes to the public.

Image by cliff1066 on Flickr under Creative Commons License.
4

The Old Bus Station is located on a corner site and is a landmark for the area. Built in 1926 in a Spanish eclectic style with Beaux Arts elements, it was originally a three-story building. Following a hurricane less than a year later, the building was cut to one story. Renovated a number of times, the building became a retail center for a time, and is now the venue for the popular Art Bar nightclub.
Image by cliff1066 on Flickr under Creative Commons License.
5

5) Museum of Discovery and Science (must see)

The Museum of Discovery and Science is one of the largest museums of its kind in Florida, and has the most visitors of any museum in the state. The museum features its own AutoNation IMAX theater, and shows 3-D IMAX films in which viewers wear special glasses and headsets. The museum also features a number of "ecoscapes", as well as a simulated ride to Mars and a MaxFlight airplane simulator. Among the more popular aspects of the museum are the quantity and variety of Floridian animal species on display. The public are allowed to get quite close to the animal life, and the museum frequently has organized animal-centered demonstrations, or more informal meet-and-greets with native and exotic Florida fauna.

Other than the animals on display, the Museum of Discovery and Science currently features a Discovery Center for ages 7 and under, Go Green exhibit, Runways to Rockets including airplane simulators and information about space, Powerful You! exhibit, minerals and rocks on display, games, puzzles, Explore Store, Subway restaurant, and a moving exhibit. The "Great Gravity Clock" in front of the entrance is one of the main features of the museum and is one of only three in the world. The other two are in Japan and Mexico. The museum plays host to birthday parties, (sea) turtle walks and camp-ins, and has its own day camp.


Image by www.mods.org under Creative Commons License.
Sight description based on wikipedia
6

6) The Broward Center for the Performing Arts (must see)

The Broward Center for the Performing is place to go to experience a great night of theater, whether you like drama or comedy. Opened in 1991, its first show was Andrew Lloyd Webber's “Phantom of the Opera”. Since then it has hosted many other successful Broadway Shows. There's also the chance to see local music and comedy productions.
Image by Jack Stephens on Flickr under Creative Commons License.
7

The Riverwalk Park is the perfect place for a stroll on the northern bank of the New River. Overlooking the Himmarshee Village, it's a favorite spot among many visitors to the city. The park is known for its local music performances such as monthly Jazz Brunches and season fairs. The Riverwalk Park is also conveniently located near the Broward Center for the Performing Acts and the Museum of Discovery and Science.
The Las Olas Riverfront in Fort Lauderdale's historic downtown makes for an entertaining walk in which visitors can admire both the city skyline and the banks of the New River. Plus there's the chance to visit sidewalk cafes, restaurants, shops, and movie theaters. Many of the city's historic attractions are also located in the area.
Image by cristinabe on Flickr under Creative Commons License.
8

Fort Lauderdale History Center, formerly known as The Old Fort Lauderdale Village & Museum was the first site of the city-to-be, founded by Major William Lauderdale in 1838 at the cross of the East Coast Railway and the New River. The complex houses a combination of original and replica 19th Century buildings, including the first school, a research center, and the New River Inn. The museum tells the story of Fort Lauderdale from its establishment right up to World War II, with permanent exhibitions of artifacts from local history, as well as guided history tours and lectures.

One of the most memorable walks you can take in Fort Lauderdale is the Riverwalk in the historic downtown. It offers an occasion to admire both the city skyline and the banks of the New River, plus the chance to visit sidewalk cafes, restaurants, shops, and movie theaters. Many of the city's historic attractions are also located in the area.
Image by cliff1066 on Flickr under Creative Commons License.
10

10) The Stranahan House (must see)

The Stranahan House, also known as the Pioneer House, is a historic building located at 335 Southeast 6th Avenue in Fort Lauderdale. It was built in 1902 as a trading post by Frank Stranahan (1865-1929}, the founder of Fort Lauderdale, who had earlier established a ferry across the New River at this point to carry traffic on the newly built road from Lantana to what is now North Miami. The building also served as the town hall and post office. It became his home in 1906 when he added a second story and remodeled the existing structure for his wife, Ivy Julia (Cromartie) Stranahan (1881-1971), Fort Lauderdale's first teacher and co-founder, whom he had married in 1900.

After her husband's death Ivy Stranahan kept the house, but rented out the first floor to a restaurant. After her death it was devised to the Seventh-Day Adventist Church which sold it to the Fort Lauderdale Historical Society in 1979. After being restored the house was conveyed in 1981 to Stranahan House, Inc., a non-profit corporation set up to preserve and maintain it.

Las Olas Boulevard is a popular thoroughfare in Fort Lauderdale, Florida, United States that runs from Andrews Avenue in the Central Business District to A1A and Fort Lauderdale Beach. The easternmost section of the boulevard is interlaced with canals and waterfront homes. The commercial stretch, approximately 1-mile (1.6 km) in length, features cool sub-tropical breezeways and courtyards with bars, nightclubs, bridal stores, shops, boutiques, art galleries, restaurants and the Riverside Hotel—this is referred to as the "Riverfront" area of downtown Fort Lauderdale. The name "Las Olas" means "The Waves" in Spanish.
Image by Steve Sutherland on Flickr under Creative Commons License.
Sight description based on wikipedia