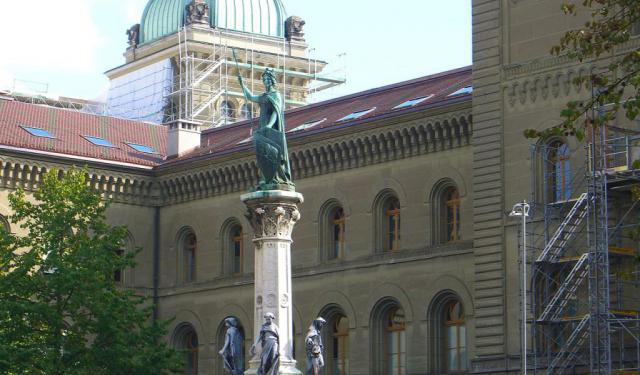 Image by tomislavmedak on Flickr under Creative Commons License.

Bern is famous for its 16th-century fountains, many of which include impressive original statues. Today these fountains tell us stories about events and heroes from Bern’s past. Take this tour to explore the historical fountains of Bern.
How it works: Download the app "GPSmyCity: Walks in 1K+ Cities" from iTunes App Store or Google Play to your mobile phone or tablet. The app turns your mobile device into a personal tour guide and its built-in GPS navigation functions guide you from one tour stop to next. The app works offline, so no data plan is needed when traveling abroad.

The Weltpost Denkmal fountain is located in Schanze Kleine, Bern. This fountain features the bronze sculpture known as “Around the World”. The sculpture is situated on an artificial rock behind the fountain. The sculpture itself is a globe, and nearby is a sculpture of a woman representing the city of Bern.
Image by Baikonur on Wikimedia under Creative Commons License.
2

While you are walking the streets of Bern, you may notice the Bernabrunnen fountain, which is located in the court of the Western Federal Parliament. This fountain symbolizes Bern and was constructed in 1863 at the same time the Parliament was built.
Image by Bgvr on Wikimedia under Creative Commons License.
3

Located in the Old City of Bern, this 16th-century fountain is on the list of Swiss heritage sites of national importance. The Pfeiferbrunnen was built in 1545/46 by the Swiss Renaissance sculptor Hans Gieng, based on the 1514 Albrecht Dürer woodcut of the Bagpiper. Originally, it stood in front of the Gasthaus (hotel and restaurant) zum Kreuz, which was a hotel for traveling minstrels. In 1594 the building was renamed to Gasthof zum Storchen. Which led to the alternate name for the Pfeiferbrunnen, the Storchenbrunnen. This alternative name was popular until the end of the 19th century. During the renovation of 1874, an inscription was placed on the back of the statue, and the figures on the pillar were damaged. The current basin was built in 1889. Then, in 1919 the fountain was moved to the east from its original spot between Ryffli- and Storchengässchen, to its current location in front of Spitalgasse 21.
Image by Nikolai Karaneschev on Wikimedia under Creative Commons License.
Sight description based on wikipedia
4

Ryfflibrunnen is a 16th-century fountain that consists of a basin, column and statue. It was built in 1545. The figure at the fountain’s top is of a hero with a bear at his feet. The statue is about 15 feet tall.
Image by kevindooley on Flickr under Creative Commons License.
5

The Meret-Oppenheim-Brunnen fountain is a symbol of Bern's economic power. The spiral column at the center of the fountain has many natural elements and is covered in plants and grass.
Image by twicepix on Flickr under Creative Commons License.
6

The fountain, located at the upper end of Marktgasse memorializes the founder of the first hospital in Bern. On November 29, 1354 in her will she asked the city to help found a hospital in her house which today stands on Zeughausgasse. The hospital initially had 13 beds and 2 attendants and was to be an ewiges Spital or a perpetual hospital. In 1531 the hospital moved to the empty Dominican Order monastery St. Michaels Insel (St. Michael's Island) and was then known as the Inselspital, which still exists over 650 years after Anna Seiler founded it.

Image by Mike Lehmann on Wikimedia under Creative Commons License.
Sight description based on wikipedia
7

Schützenbrunnen is a 16th-century fountain located in the center of Bern. The fountain was built from 1527-1543. The figure at the top of the fountain is a man who holds in his right hand a Reismusketen-Shooting banner and in his left, a long sword. Near his feet is situated a small bear.
Image by Andyindia on Wikimedia under Creative Commons License.
8

One of the most interesting statues in Bern is Kindlifresserbrunnen, which translates to "Child Eater Fountain" or "Ogre Fountain." The fountain was built in 1545-46 on the site of a 15th-century wooden fountain. Originally known as Platzbrunnen, the current name dates back to 1666. The statue is of a seated giant or ogre swallowing a naked child. Several other children are visible in a sack at the figure's feet. There are several interpretations of what the statue represents. It has been suggested that the ogre is a Jew with a pointed Jewish hat or perhaps the Greek god Chronos. However, the most likely explanation is that the statue represents a figure from folklore that scares disobedient children.

Image by Baikonur on Wikimedia under Creative Commons License.
Sight description based on wikipedia

Bern has an amazing range of shops where you can find great gifts and souvenirs. Take this tour to discover Bern's best wine shops, watch stores, bookstores and more.

When the sun goes down, you can enjoy another side of Bern – its nightlife. Bars and lounges can be found throughout the city, which will keep you entertained with a wide range of cocktails, music and shows. Take this tour to discover Bern's funkiest nightspots and to have an unforgettable night on the town.

Museum and Gallery Tour of Bern

Bern has an amazing array of museums and galleries to visit. Learn about the culture of the Swiss Alps. Check out what's new in contemporary art. View historical photos of Bern. Take this tour to do all this and more as you visit Bern's most famous museums and galleries.

Bern has a very interesting and storied history. The city is the cultural center of Switzerland and has a wide range of architectural monuments and buildings to explore. Some of them will impress you with their unusual style, while others will amaze you when you learn how they were constructed. Take this tour to visit Bern's architectural highlights.

Bern is famous for its 16th-century fountains, many of which include impressive original statues. Today these fountains tell us stories about events and heroes from Bern’s past. Take this tour to explore the historical fountains of Bern.

Bern is the capital of Switzerland, and here you can find many fascinating attractions, such as the century clock tower, The Münster of St. Vincent, the Historical Museum of Bern and the Bundeshaus. Take this tour to explore the most notable sights in Bern; you will not be disappointed.