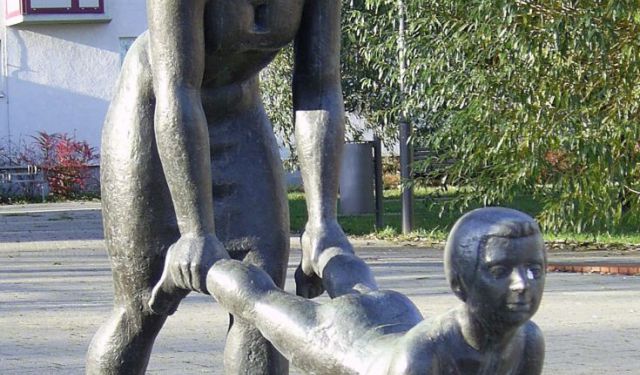 Image by Sicherlich on Wikimedia under Creative Commons License.

Fun for Children in Frankfurt (Self Guided), Frankfurt

Frankfurt is a great city to spend time with your family and kids. Frankfurt is a perfect combination of old and modern, it has numerous things to offer both adults and little visitors. Museums, shops and cafés are just a few of the many spots that will make your stay a wonderful one.
How it works: Download the app "GPSmyCity: Walks in 1K+ Cities" from iTunes App Store or Google Play to your mobile phone or tablet. The app turns your mobile device into a personal tour guide and its built-in GPS navigation functions guide you from one tour stop to next. The app works offline, so no data plan is needed when traveling abroad.

The Frankfurt Zoological Gardens are one of the oldest repositories of zoological exhibits in the world. The present facility is in an area of over 13 acres housing a variety of common and rare species.

The first zoological gardens in Frankfurt were founded in 1858 with Dr. Max Schmidt as their president. The zoo started with 600 animals. Dr. Schmidt had visited zoological parks in several countries and using his vast experience increased the number of animals during his 25-year tenure. Chancellor Otto Von Bismarck presented 2 bears to the zoo at the time. Despite the hardship caused by lack of food and frequent bombing, the director of the Zoo from 1908, Dr. Kurt Priemel made efforts with the help of animal lovers to protect rare and endangered animals, birds and fishes. The entire facility was destroyed in the 1944 bombings and many animals including big cats and elephants had to be put down because of bomb injuries. At the end of WWII, only 40 large animals remained. After the War, the well-known biologist and writer, Dr. Bernhard Grzimek took over the management of the Zoo and not only increased the number of species but improved the facility for the comfort of the animals and visitors.

Why You Should Visit:
Pretty impressive for a city centre zoo! Very good for children/toddlers, too.

Tip:
Go on the feeding hours to see the animals getting fed (check online for specifics).
Food in the Mexican restaurant is good and not overpriced; otherwise, feel free to bring your own picnic and you'll have a great day.


Image by dontworry on Wikimedia under Creative Commons License.
Sight description based on wikipedia
2

Das Spielzimmer is ideally located in downtown Frankfurt. Das Spielzimmer is a specialty shop built just for children. Your kids will fall in love with a shop that presents a plethora of exclusive hand-made dolls.

The Young Museum Frankfurt is one among the many museums along the banks of the River Main. Children are allowed to touch the many historical objects while learning about their significance in the culture and history of the city.

This museum has interactive exhibits for children above the age of six accompanied by their parents or as part of a school group. Children are allowed to touch and try out some of the objects. They are also encouraged to ask, think independently and learn by themselves about the many exhibits in the building. New and innovative exhibitions are held for the enjoyment and education of children. Children can take part in the crafts, technical and painting workshops run by the museum. A model of an old country store allows children to play at buying, selling or acting as cashier.

The Young Museum also offers parents uniquely themed parties to celebrate an occasion for their children and their friends. Themes for parties include computer parties, painting parties, magic parties and craft parties. Parents need to bring food and drinks while the museum arranges all other party requirements.

Age specific 2 hour guided tours are available for school groups and families around the exhibits at the children’s museum.

Historisches Museum Frankfurt (HMF) portrays the momentous events that shaped the city from the early medieval times to the present. It has several valuable permanent treasures and exhibits and plays host to themed temporary history-related exhibitions.

The HMF is housed in a 12th-century Romanesque Palace called the Salhoff. The museum complex covers five historical buildings and a modern structure. Visitors are greeted by a portrait of Charlemagne placed at the front. Permanent exhibits are arranged in chronological order taking visitors through the early medieval times when Frankfurt was a city-state, the late middle ages, the 16th to the 18th centuries, the 19th century and the city between 1866 to 2001.

Treasures at the museum include the St. Anne altarpiece from a Carmelite church, the Heller altarpiece by Albrecht Durer from a Dominican cloister and a sculpture depicting the reconciliation of Emperor Otto I with his brother Heinrich by Alfred Rathel. Major attractions at the museum are three scale models of the city made by the Treuner brothers, one showing medieval Frankfurt, the other showing the city after the 1944 bombardment, and a third modern postwar model of Frankfurt.

The Historisches Museum also has an interactive space for children, a large collection of porcelain and a unique museum dedicated to comic books.

Why You Should Visit:
All exhibits have descriptions in German & English and the interactive digital info is state of the art.
Sharp new connecting buildings link are a joy to be in; naturally, there is an awesome cafe with both inside & outside seating.
The museum marries old and new in its build and proves Frankfurt's importance as an international cultural hub.

Cafe Karin is located in Frankfurt's city center, directly across from the main entrance of Goethehouse. The beautiful aspect of Cafe Karin is that you can take as much marmalade as you wish for one small charge. Children will absolutely love Cafe Karin.
Image by avlxyz on Flickr under Creative Commons License.