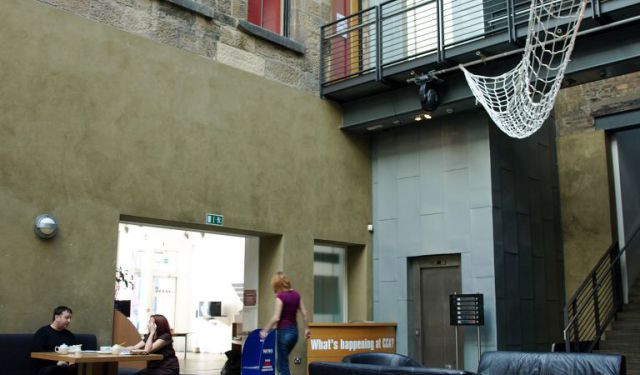 Image by pixelthing on Flickr under Creative Commons License.

Art and culture hold a special place in the hearts of Glaswegians, and Scots in general. The emphasis here is laid on maintaining and promoting the appreciation of arts among both locals and visitors. Take our Walking Tour to see some of the best galleries and art centers around Glasgow's Garnethill district .
How it works: Download the app "GPSmyCity: Walks in 1K+ Cities" from iTunes App Store or Google Play to your mobile phone or tablet. The app turns your mobile device into a personal tour guide and its built-in GPS navigation functions guide you from one tour stop to next. The app works offline, so no data plan is needed when traveling abroad.

The Royal Highland Fusiliers Home Headquarters and Museum is to be found on Sanchiehall Street and it is a very interesting museum well worth a visit.

The Royal Highland Fusiliers were formed in 1959 when the 21st Company of the Royal Scots Fusiliers merged with the 71st, 73rd and 74th Companies of the Highland Light Infantry and they moved into their present headquarters in 1960.

The museum covers the twin histories of the RSF and the HLI from 1678 to the present day, with displays spread out in six galleries: Gallery N°1 explains how the regiments were founded; In Gallery N°2 you will see the uniforms and artefacts from campaigns all round the world. Gallery N° 3 also holds uniforms, medals and musical instruments.

Other uniforms and weapons are to be found in Gallery N°4. Gallery N°5 deals with weapons used during World War One and the years between the Wars, while in Gallery N°6 you will find weapons and artefacts from to World War Two to the present day. These last galleries have an impressive display of maps and photos.

You can visit the Colonels’ Room and Dining Room, both of which can be hired for private lunches and parties. The museum library houses history books from the 19th century, lists of the regiments, lists of medals, information about weapons, uniforms and photos, as well as Rolls of Honour from the two World Wars.


Image by Pam Hurtling on Flickr under Creative Commons License.
2

The Centre for Contemporary Arts is housed in the former Third Eye Centre on Sauchiehall Street and is a great place to visit as it covers a wide variety of arts.

The Centre opened to the public in 1992 in the “Grecian Chambers” which were designed by Alexander Thompson in 1868. The building was renovated and adapted to the Centre’s growing needs in 1998.

The Centre has an art gallery, a cinema, a theatre area and a café. It holds six main exhibitions a year featuring works by Scottish artists and some new canvases by international artists.

It is a popular place for locals as it has a dance club, weekly drama classes, a creative writing laboratory and the Scottish Screenwriters Club. You can go along and listen to or experiment in modern electronic music, take part in lectures or watch short documentaries or foreign films in the Centre’s cinema.

The “Aye Aye Books” bookshop in the foyer has a vast collection of art books, magazines, CD’s and DVD’s. The café has an outdoor terrace with views over the shopping area. The food is very good and you can enjoy a meal at reasonable prices. There is a special Pre-Theatre menu and a Tapas Special menu with a selection of delicious snacks.

3) Glasgow School of Art (must see)

Founded in 1845, the Glasgow School of Art is one of the oldest art institutions in Britain. The school is housed in a number of buildings in the centre of Glasgow, the most famous of which was designed by Charles Rennie Mackintosh in phases between 1896-1909. The eponymous Mackintosh Building soon became one of the city's iconic landmarks and stood for over 100 years. The building was severely damaged by fire in May 2014 and destroyed by a second fire in June 2018, with only the burnt-out shell remaining.

Tip:
The Mackintosh building is closed due to the 2018 fire. Apparently, it will be rebuilt, but the timeline is unknown.
Image by Jörg Bittner Unna on Wikimedia under Creative Commons License.
Sight description based on wikipedia
4

This outstanding gallery is the largest in Scotland and is situated in a very nice centuries-old building in the city center. The gallery specializes in the most acclaimed works of Scottish modern and contemporary artists. Here you'll find works by James Tweedie, Duncan Shanks, Leon Morrocco and many others. The monthly rotating exhibitions include paintings, ceramics, jewellery, silver, glass and metal works. If you only visit one gallery while in Glasgow, make it this fascinating spot.

Established in 1985, the Glasgow Gallery specializes in traditional and contemporary art, and features many Scottish, British and international artworks from the 19th and 20th centuries. Located in the city center, the gallery is open Tuesday to Friday from 10.30 am - 5 pm / Saturday from 10.30 am - 4:30 pm.
Image by alancleaver_2000 on Flickr under Creative Commons License.
6

The Compass Gallery is a non-profit organization that has been in operation for more than 30 years. Its role is to support and foster young artists. Here you'll see the works of contemporary Scottish artists - mainly the graduates of the four national art schools - as well as modern British artists. The works include drawings, sculpture, ceramics, paintings and prints. The institution is supported by the Hugh Fraser Foundation, the Merchants Trade House of Glasgow, and the Glasgow City Council.

Glasgow is the largest city in Scotland and a very popular destination among tourists. With a number of 19th century buildings, numerous musical events, football matches, traditional pubs, food venues, Glasgow is a truly unique place. Don't miss the chance to visit some of its most popular tourist attractions listed below.