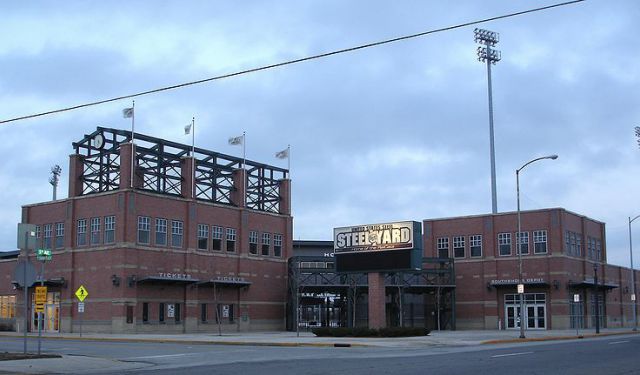 Gary, a quiet city on the shore of Lake Michigan in Indiana, today is famous primarily as the birthplace of Michael Jackson, the King of Pop, and the hometown of The Jackson 5 band. Throughout its century-long history, Gary, founded in 1906 by the United States Steel Corporation, has accumulated a number of notable sights. Take this orientation walk to see some of the most prominent attractions of the city.
Image Courtesy of Wikimedia and John Delano.
How it works: Download the app "GPSmyCity: Walks in 1K+ Cities" from iTunes App Store or Google Play to your mobile phone or tablet. The app turns your mobile device into a personal tour guide and its built-in GPS navigation functions guide you from one tour stop to next. The app works offline, so no data plan is needed when traveling abroad.

Gary's City Hall is a beautiful structure made in a neoclassical style located on Broadway in the downtown area. The building has four levels and a fascinating dome on top of it. In front of the building is located a statue of Elbert H. Gary, the chairman of the United States Steel Corporation and founder of the city. The statue was made in bronze by sculptor Bryant Baker.
Image Courtesy of Wikimedia and Chris Light.
2

Lake County Superior Court is another important landmark in Gary. It is located on West 4th Avenue next to the Gary City Hall. It is also built in a neoclassical style, and as well as the City Hall structure, has four levels and a dome on top.
Image Courtesy of Wikimedia and Chris Light.
3

The Knights Of Columbus building is a beautiful structure made of brick and limestone that is a local landmark. It is listed on the National Register of Historic Places. It was built in 1925 by Porter McNally originally as a commercial building. Later, it was renovated into an apartment building. The structure is made in a Renaissance revival style.
Image Courtesy of Flickr and Steve Shook.
4

Genesis Convention Center is located in Gary’s downtown. It is a large space for social events and can accommodate up to 7000 people. Many important social and entertainment events were held here, like the Miss USA Pageant event. It is also home to the Gary Splash, of the International Basketball League. In front of the Genesis Convention Center is located a very beautiful sculpture called “The Fusion.” It was created by Omri Amrany in 2006.
Image Courtesy of Flickr and Brandon Bartoszek.
5

City Methodist Church was built in 1926 in an English Gothic style. The costs of its building were supported by the United States Steel Corp. It served as a church until 1997, when the structure was sold to Indiana University. It was a tall and large building that held the church, classrooms, meeting rooms and other spaces. Though the church is in ruins now, it is still a magnificent sight. The church was used as a set in the “Nightmare on Elm Street” movie.
Image Courtesy of Flickr and Lindspetrol.
6

Genesis Towers (formerly Hotel Gary) is another landmark of Gary located downtown. It was originally built as a hotel in 1926. The structure was originally designed to have a middle tower, but it was never finished. The building was designed by Charles Wheeler Nicol, a famous architect from Lafayette.
Image Courtesy of Flickr and Lotzman Katzman.
7

First United Presbyterian Church is a beautiful structure and a local landmark built in a Romanesque Revival style. The original structure of the church was built in 1913, but later in 1947 it was destroyed partially due to a fire. It was renovated afterward and again in 2000 and 2001.
Image Courtesy of Wikimedia and Dave Bullock.
8

Holy Angels Cathedral houses the Catholic Diocese of Gary which was established in 1906. The present structure was built in 1950 in a beautiful Gothic Revival style. It is an amazing religious sight and a local landmark worth seeing.
Image Courtesy of Wikimedia and Nyttend.
9

The Palace Theater was built by Maximillian Dubois' construction company "Max and Sons" in years 1924-1925. The theater was featuring live stage shows, vaudeville acts, and motion pictures. From the time it opened, the theater was one of the grandest venues in the town, but when the US Steel plant in Gary went into decline, so did the rest of the town, including the historic theater. The theater slid into decline, and eventually shut down entirely in 1972.

The abandoned theater has since come to be a common symbol of urban decay, and is a frequent subject of photography and urban exploration. When the Miss USA pageant was held in Gary in 2002, Donald Trump renovated the front of the theater. Sheets of plywood covering the windows were painted to depict a false interior, and an external marquee was mounted, declaring "Jackson Five Tonite". Since then the facade mostly didn't change.

Image Courtesy of Wikimedia and Kevin Miller.
Sight description based on Wikipedia.