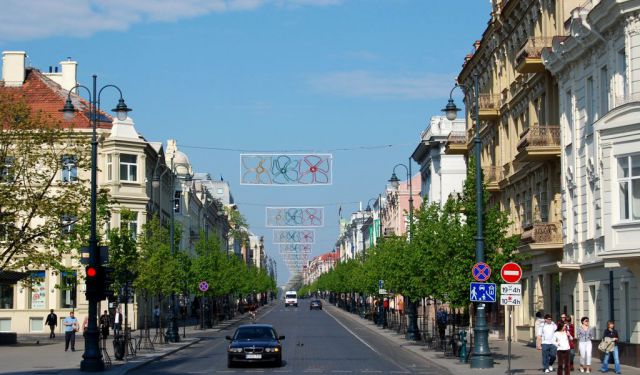 Image by Sfu on Wikimedia under Creative Commons License.

Gediminas Avenue is the main street in the capital city of Lithuania. The street was named after the Grand Duke of Lithuania Gediminas. The average tourist will find many popular attractions on Gediminas Avenue such as the Museum of Genocide Victims, Lukiškės Square, and the Lithuanian National Drama Theatre.
How it works: Download the app "GPSmyCity: Walks in 1K+ Cities" from iTunes App Store or Google Play to your mobile phone or tablet. The app turns your mobile device into a personal tour guide and its built-in GPS navigation functions guide you from one tour stop to next. The app works offline, so no data plan is needed when traveling abroad.

Lithuanian National Drama Theatre is one of the biggest theaters in Lithuania. Since its establishment in 1940, it has staged over 200 performances. The theater's current repertoire mixes classical and modern theater with material by contemporary Lithuanian playwrights.

The theater was granted the right its current name in 1998, having previously been known as the "Academical" theater. In 2001 the Lithuanian National Drama Theatre became a member of the European Theatre Convention.

Gedimino Palace was built in 1893 and once served as the headquarters for the Central Committee of the Lithuanian Communist Party. For four centuries the Palace was the political, administrative and cultural center of the Grand Duchy of Lithuania. Today, Gediminio Palace is the location for the newest shopping mall, called Gedimino 9. The district offers around 65 boutiques were customers can find famous Lithuanian trademarks such as Lindex, La Senza, Living, the Body Shop, Polarn O. Pyret, Teddy, and Kashmir.
Image by Alma Pater on Wikimedia under Creative Commons License.
Sight description based on wikipedia
3

The monument to Julija Žymantienė is located in a small public garden in the heart of Vilnius. Julija Žymantienė is recognized as the the greatest writer of Žemaitija and a classic of Lithuanian prose. Žymantienė dealt with major problems of society in her work and is honored nicely with a rather simple monument.
Image by Juliux on Wikimedia under Creative Commons License.
4

4) Lithuanian Academy of Music and Theatre

The Lithuanian Academy of Music and Theatre is a state-supported conservatory that trains students in music, theater, and multimedia arts.

Its students and professors perform in over 400 concerts per year, participating in national and international orchestras, international concerts, performances, competitions, and festivals.

Image by Julius on Wikimedia under Creative Commons License.
Sight description based on wikipedia
5

Lukiškės Prison is a prison in the center of Vilnius. After more than a century of continuous service, the prison suffers from overcrowding and is in need of investment in thorough improvements. The prison is located in a prestigious area, next to the Seimas Palace.

The prison was built in 1904, when Lithuania was part of the Russian Empire. At the time it was one of the most technologically-advanced prisons in the empire. It had central heating and water supply, modern plumbing and ventilation. The complex also includes Saint Nicholas Orthodox Church.

The prison became more notorious during the Nazi occupation of Lithuania, when it was used by the Gestapo and Lithuanian Saugumas as a holding cell for thousands of Jews from the Vilna Ghetto and Poles, picked up in Łapankas in reprisals for actions by the Polish resistance.
Image by Alma Pater on Wikimedia under Creative Commons License.
Sight description based on wikipedia
6

Martynas Mažvydas National Library of Lithuania is a national cultural institution which collects, organizes and preserves Lithuania’s written cultural heritage content, develops the collection of Lithuanian and foreign documents relevant to research, educational and cultural needs of Lithuania, and provides library information services to the public.

Seimas Palace is the Lithuanian parliament named Seimas seat in Lithuania's capital Vilnius. Works on the construction of the first wing of palace were carried out in 1976. The Construction was supervised by architects Algimantas Nasvytis and Vytautas Nasvytis. In 1980 9717,37 square meters palace works were completed. Later the building was expanded due to growing needs. Lastly the palace complex consisted of three wings, the main, first wing, housed the Parliament Hall, where legislation works were carried out.
Image by sfu on Wikimedia under Creative Commons License.
Sight description based on wikipedia