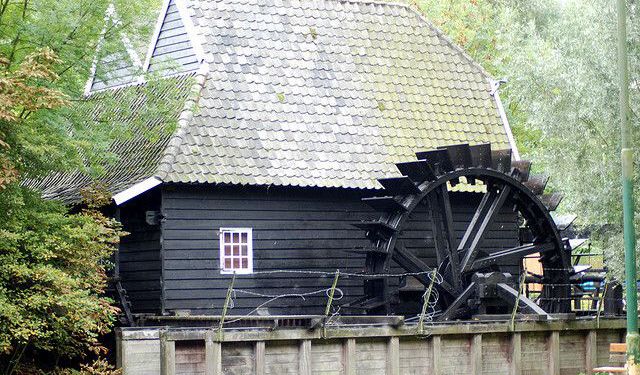 Image by BobMacInnes on Flickr under Creative Commons License.

Genneper Park is one of the most exciting places to visit fit for every member of the family. It is located in an environmental friendly area, where visitors will have the chance to enjoy both the clean air and activities associated with strong health like hiking, skiing and swimming. Children have a special place in the present guide. Every presented attraction offers the younger ones special entertaining activities that will keep them busy and excited.
How it works: Download the app "GPSmyCity: Walks in 1K+ Cities" from iTunes App Store or Google Play to your mobile phone or tablet. The app turns your mobile device into a personal tour guide and its built-in GPS navigation functions guide you from one tour stop to next. The app works offline, so no data plan is needed when traveling abroad.

The Milieu Educatie Centrum on the territory of the Genneper Park is an ideal place for both adults and children to learn more about the environment. The younger generation will be delighted to admire the mammoth skeleton, enjoy the playground that has attractions even for the highly active, watch an interactive exhibition in the form of a fairy tale and many other entertaining activities. The educational center is located not far from a water mill, which aside from being a very popular attraction, houses a small shop. The mill has been declared a national monument. It was installed in 1884 by Vincent van Gogh and throughout its existence, has undergone much renovation.
Image by Wammes Waggel on Wikimedia under Creative Commons License.
2

The Genneper Farm is linked to the Milleu Educational Center and represents, to the delight of the children and the fauna-loving adults, a very old rustic home for domestic animals. The building that shelters the farm animals dates from the eighteenth century. Cows, pigs and diverse house birds are permanent inhabitants of the farm. The place is also surrounded by a grain field. Visitors will be told about the production of milk products, animal caring and other farm-related aspects. The farm works Wednesday-Friday: from 14.00 till 17.00, Saturday: from 10.00 till 17.00, Sunday: from 13.00 till 17.00.
Image by Haaglander on Flickr under Creative Commons License.
3

The museum has several distinct target audiences. Primary among these are school children, who comprise most of the visitors on weekdays. In the weekends and during holiday season the museum focuses on regular tourists. The museum features a lot of living history exhibits as well as semi-historical reenactments. During holiday seasons extra activities are staged for children. The museum also arranges historically themed corporate and family outings outside of opening hours. Some 60.000 people visited the museum in 2005.

Image by mararie on Flickr under Creative Commons License.
Sight description based on wikipedia
4

Ton Smits House is the former home and work place of the famous catoonist and painter who worked for the best American newspapers. The design of the building was created by Fons Vermeulen, a modern architect who was hired by Ton Smits when he decided that he needed a personal, spacious home studio. The style of the structure is simple, yet modern and unusual, like Ton Smits's works. The artist's house was transformed into a museum and exposition hall in 1983, two years after his death. Nowadays, visitors can admire about twenty thousand sketches and ready cartoons as well as several hundred paintings. Besides his works, there are many things related to the artist such as photographs, awards and documents. On Wednesdays the museum is open from 11.00 to 17.00 and by appointment.
Image by MrB-MMX on Flickr under Creative Commons License.
5

The Indoor Sportcentrum is covered by an enormous elliptic dome-like construction. The diametre of the building is 79 by 119 metres. The interior of the sports center is equipped with the highest technological standards. There are several numbers of indoor grounds for football, handball, hockey, volleyball and other games. Tennis is one of the most revered sport here - the sportscenter has six courts. Besides watching the games, visitors are welcome to enjoy the gymnasium and the restaurant of the Indoor Sportcentrum.
Image by Lempkesfabriek on Wikimedia under Creative Commons License.
6

De Tongelreep is not only the grandest indoor pool complex in the country, but in all of Europe. The best solo swimmers and swimming teams of the country exercise here. The equipment installed in the Tongelreep is completely modern, and includes a wave pool. Besides this main pool, there are three others - the training pool, the Olympic swimming pool and the diving area. Besides swimming, visitors will be delighted to spend some time in the fantastic jacuzzi or have a sunbath outside, in a specially dedicated area. There is also a cafe. The leisure pool is open Mondays and Tuesdays from 10.00 to 18.00, from Wednesday until Friday from 10.00 to 21.00 and on weekends from 10.00 to 17.30.
Image by maartmeester on Flickr under Creative Commons License.
7

The Pavilion in the Genneper Park is a perfect place to relax. It is apparently the quietest site in the park, where the whole family can relax by playing some golf or just sitting by a table, sipping some coffee and admiring the surroundings. The youngest members of the family will be delightet to discover the large number of attractions organized just for them: a sandbox, a trampoline, special minigolf, bowling and a special kids' menu. The Pavilion is open every day from 11.30 until 21.00, except Sundays when it opens from 10.00. Saturdays the Pavilion works only until 18.30.
Image by kulicki on Flickr under Creative Commons License.
8

Ijssportcentrum Eindhoven is the grandest ice dance floor in the country. The area of the skating territory is more than eight thousand square metres and it includes three ice-covered rinks. The first is a four hundred meter track, the second is a big hockey rink and the last is a training area, used by champions and champions-to-be for training. The hockey rink, when it is free of matches, is used as an entertainment area, where adults along with their children are welcome to exercise their skating skills or just have fun ice dancing. IJssportcentrum is open on Saturday-Monday: from 10.00 till 18.45 and Tuesday-Friday: from 10.00 till 22.00.
Image by Lempkesfabriek on Wikimedia under Creative Commons License.