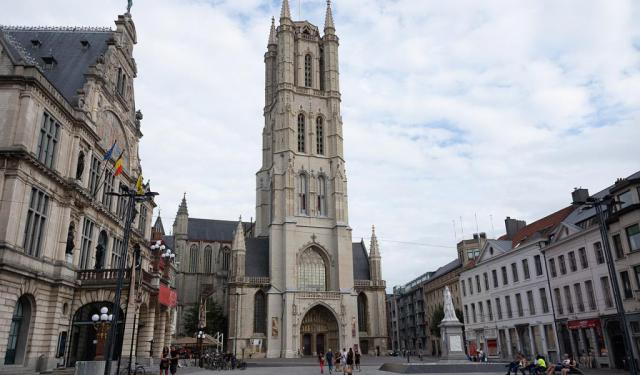 Image by Liza Knockaert on Wikimedia under Creative Commons License.

Ghent has several cathedrals and churches that are definitely worth a visit. Ghent is a city that values beautiful, elegant architecture, which is reflected in its sacred buildings. Some of the most magnificent churches are Saint Bavo Cathedral, Saint-Nicolas' Church and Saint Michael's Church. This self-guided tour will lead you to the most stunning churches in this splendid city.
How it works: Download the app "GPSmyCity: Walks in 1K+ Cities" from iTunes App Store or Google Play to your mobile phone or tablet. The app turns your mobile device into a personal tour guide and its built-in GPS navigation functions guide you from one tour stop to next. The app works offline, so no data plan is needed when traveling abroad.

Sint-Elisabethkerk, or Saint Elisabeth Church, is a UNESCO World Heritage site dating from 1234. The church bears the name of Elisabeth of Hungary, also known as Saint Elisabeth of Thuringia. Scenes of her life are depicted on the neo-Gothic pulpit. Some parts of the church originate in the 13th century, when the beguinage was established. In the 17th century the church underwent major reconstruction, assuming the Baroque style complete with a distinctive element—the small wooden Baroque belfry. After the beguines left at the end of the 19th century, Saint Elisabeth’s church turned into a parish. It stands amidst a marshland, which at the time was used by the beguines to bleach their washing, much as for many other domestic things.
Image by LimoWreck on Wikimedia under Creative Commons License.
2

Saint Michael's Church is a Roman Catholic church devoted to the Archangel Michael. Construction of the current church probably began in 1440 and took place in two phases, separated by a long interruption. During the first phase, in the fifteenth and sixteenth centuries, the western part of the building was built, including the tower, the three-aisled nave and transept. This was completed in 1530. Continued construction of the steeple started in in 1566. Then, due to religious conflicts, not only did construction stop, but looting and destruction took place, and part of the church was demolished in 1579 by the Calvinists. From 1623 to 1659, the architect Lieven Cruyl worked on the building. The church has a rich neo-Gothic interior, including an altar and a pulpit, and is decorated with Rococo and neoclassic statues and several eighteenth-century and Baroque paintings, including "Christ Dying on the Cross" by Anthony Van Dyck and paintings by De Crayer and Philippe de Champaigne.
Image by LimoWreck on Wikimedia under Creative Commons License.
Sight description based on wikipedia
3

St. Nicholas' Church is one of the oldest and most prominent landmarks in the city. Begun in the early 1200s as a replacement for an earlier Romanesque church, construction continued through the rest of the century in the local Scheldt Gothic style (named after the nearby river). Typical of this style is the use of blue-gray stone from the Tournai area, the single large tower above the crossing, and the slender turrets at the building's corners. The central tower, which was funded in part by the city, served as an observation post and carried the town bells until the neighboring belfry of Ghent was built. These two towers, along with Saint Bavo Cathedral, still define the famous medieval skyline of the city center. One of the treasures of the church is its organ, created by the famous French organ builder Aristide Cavaillé-Coll.
Image by Christian Gidlöf on Wikimedia under Creative Commons License.
Sight description based on wikipedia
4

Saint James Church was built on the former location of a chapel in the 12th century. This monumental church was first built in the Roman religious style. Today you can still see some elements of the original church. The building was renovated in the 13th and 14th centuries. The towers of the church were built in the Gothic style, although many ornaments reflect the Roman style. The facade of the church was built in the Baroque style and neo-Romanesque elements were later added.
Image by LimoWreck on Wikimedia under Creative Commons License.
5

Saint Bavo Cathedral, also known as Sint-Baafs Cathedral, is the seat of the Diocese of Ghent. The building is based upon the Chapel of St. John the Baptist, a primarily wooden construction; it was consecrated in 942. Traces of this original structure are evident in the cathedral's crypt. The chapel was subsequently expanded in the Romanesque style in 1038. From the 14th through the 16th centuries, nearly continuous expansion projects in the Gothic style were executed on the structure. A new choir, radiating chapels, expansions of the transepts, a Chapter-house, nave aisles and a single tower were all added during this period. Construction was considered complete in 1569. The cathedral is noted for its Ghent Altarpiece, formally known as "The Adoration of the Mystic Lamb". This altar is considered one of the most important works of the early Northern Renaissance.
Image by Nigel's Europe & beyond on Flickr under Creative Commons License.
Sight description based on wikipedia
6

Saint Anna Church was built on the former site of Saint Ann Chapel. The church was constructed from 1853-1862 and has a splendid facade. Saint Anna Church was built in the Eclectic style but has many Gothic ornaments. The interior of the church is a blend of styles. Keep an eye out for frescoes by Theodoor Canneel, Byzantine decorations, splendid wall paintings and magnificent blue domes dotted with stars.
Image by LimoWreck on Wikimedia under Creative Commons License.
7

St. Peter Abbey is an old abbey that dates back to the 7th century. It has been rebuilt several times. The current building was built in the 17th century in the Baroque style. It later acquired classic elements, including a portico and columns. Many beautiful decorations and sculptures adorn the abbey.
Image by Paul Hermans on Wikimedia under Creative Commons License.
8

St. Paulus Church is a large, Christian church located in the southern part of the city that features domes windows and towers. It is a magnificent white building with beautiful decorative elements. Locals know the church as Sint-Pauluskerk.
Image by LimoWreck on Wikimedia under Creative Commons License.

Ghent is a city with many attractions. There are exceptionally interesting things to see even outside of the city center. The south section of Ghent boasts some fabulous architectural sights, such as the Book Tower and an old religious complex. There are also some museums that are definitely worth a visit. Take this self-guided tour to explore the best South Ghent has to offer.