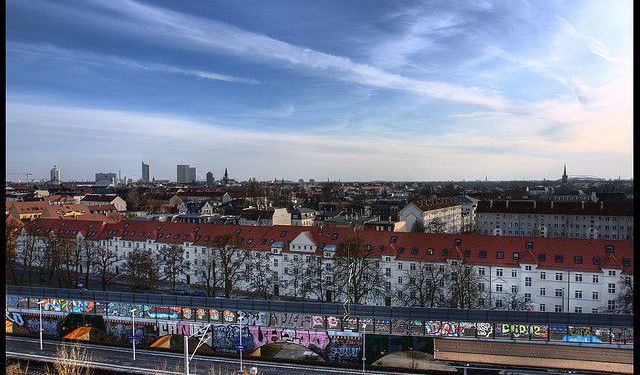 Image by iwanp. on Flickr under Creative Commons License.

The Gohlis district is full of great architectural and cultural attractions. The following tour will lead you to some of the most popular and interesting tourist attractions in this district of Leipzig.
How it works: Download the app "GPSmyCity: Walks in 1K+ Cities" from iTunes App Store or Google Play to your mobile phone or tablet. The app turns your mobile device into a personal tour guide and its built-in GPS navigation functions guide you from one tour stop to next. The app works offline, so no data plan is needed when traveling abroad.

Bethesdakirche is one of two Evangelical Methodist churches in Leipzig. The installation of the organ with 1,098 pipes in 1955 changed the whole sanctuary. A new pulpit and a communion table replaced the previous altar as well.
Image by Lumu on Wikimedia under Creative Commons License.
2

While many of the city's attractions are located in the center, a visit to Gohlis, a small village in the countryside, is well worth it. A part of the city since the late 19th century, it is where Friedenskirche can be found. Construction of this Neo-Gothic church began in 1871, designed by architect Hugo Altendorff. The church’s tower offers a great view of the surrounding landscape.
Image by Lumu on Wikimedia under Creative Commons License.
3

The Schiller House, Leipzig’s oldest farmhouse, is where Friedrich Schiller worked on the second act of Don Carlos, edited Fiesco and wrote the first version of Ode to Joy in 1785. Built in 1717 as a residential house, in the late 18th century it was remodeled to create additional accommodation for summer visitors.

Built in 1756, Gohliser Schlösschen served as a palace for bourgeois merchants and aristocrats for a long period of time. Located on the edge of Rosental Park, it is the only Rococo building in the city. Its elegant design, well-kept structure and rare interior decoration make it a jewel of Leipzig’s cultural history. It serves as a venue for social events, concerts, readings and ballet performances.
Image by Angela Marie on Flickr under Creative Commons License.
5

Gohliser Black, Gohliser Bräu and Gohliser Kid are the three house beers that you can enjoy in this lively German Pub. In addition to its delicious food and beer, you can watch sports such as football and boxing here as well. It also has a private room with a quieter, more relaxed atmosphere. The pub is popular among locals and visitors to Gohlis.
Image by mccun934 on Flickr under Creative Commons License.
6

The Michaeliskirche has survived the destruction of the war unscathed and is distinguished by the original design of other church buildings of the epoch.

Image by Bbb on Wikimedia under Creative Commons License.
Sight description based on wikipedia
7

The Leipzig Zoological Park, opened in 1878 as a private zoo, is one of world's most fascinating and popular zoos. The aquarium, the petting zoo, the large carnivore exhibit and Pongoland, its monkey exhibit, are among its notable attractions. Combining the qualities of old zoo design with modern innovation, it is definitely worth a visit.
Image by Appaloosa on Wikimedia under Creative Commons License.
Sight description based on wikipedia
8

Image by Enst38 on Wikimedia under Creative Commons License.