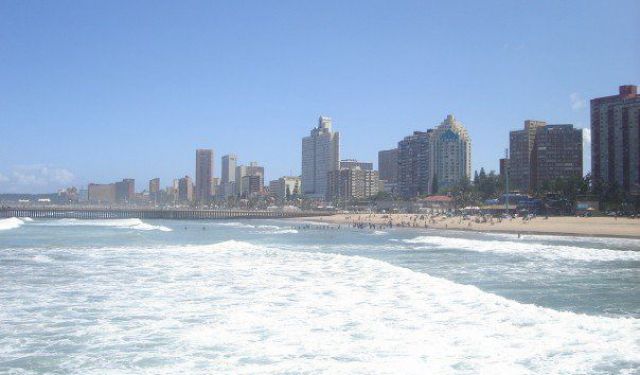 The Golden Mile is undoubtedly one of the most prominent tourist attractions in Durban. The wide stretch of beautiful beaches, separated by piers, offers a great opportunity for tourists to enjoy the warm waters of the Indian Ocean. The Golden Mile has always been a popular destination for both domestic and international travelers. Take the following self-guided tour to explore the best Golden Mile attractions.
Image Courtesy of Flickr and Tati51.
How it works: Download the app "GPSmyCity: Walks in 1K+ Cities" from iTunes App Store or Google Play to your mobile phone or tablet. The app turns your mobile device into a personal tour guide and its built-in GPS navigation functions guide you from one tour stop to next. The app works offline, so no data plan is needed when traveling abroad.

Somewhat reminiscent of the famous Wembley Stadium arch, a 350-metre (1,148 ft) long free and 105-metre (344 ft) high span arch holds up the roof of the stadium, the top of the arch rises to 106 metres (348 ft) above the pitch. The arch represents the once divided nation coming together, inspired by the South African Flag.

Image Courtesy of Wikimedia and Simisa.
Sight description based on Wikipedia.
2

Suncoast Casino and Entertainment World is situated at the northern end of Durban's Golden Mile. Besides the casino, the complex houses many restaurants, a beach bar, cinemas and its own private beach, which was rated as one of the top three beaches in South Africa. The design of the complex complements the art deco style that is common in Durban. The casino is used by many recreational cyclists as a base for their training rides up the North Coast. It also serves as the start of the Tour de Nandos cycle race in September and the end of the Amashovashova National Classic in October.
Image Courtesy of Flickr and Tati51.
Sight description based on Wikipedia.
3

Battery Beach, in comparison to the North and South Beaches, is a bit less crowded. For families it is an ideal place to spend the day. It is a quiet beach, but to the north is the large amusement park, Waterworld, and the Animal Farm. So, if you want to enjoy a relaxing day in the sun, visit Battery Beach.
Image Courtesy of Flickr and Elana Schilz.
4

Mini Town is a famous Durban landmark that is definitely worth a visit. It is a miniature replica of Durban that shows the city's most interesting buildings and places. One of the most popular features of this park is the mini rail network and airport. It is a venue that both kids and adults will enjoy.
Image Courtesy of Flickr and Tati51.
5

Bay of Plenty is a popular beach where you can go surfing, fishing or sun bathing. This beach is a definite favorite with anglers. However, fishing is only allowed at specified times, so pay attention to the posted signs. This beach is a famous venue for beach volleyball tournaments. You can also find amazing sand sculptures here.
Image Courtesy of Flickr and mickeymox.
6

North Beach is situated north of the harbor and bluff in between Bay of Plenty and Dairy Beach. It is one of the main beaches in Durban and is cared for by the Durban Surf Lifesaving Club. The beach itself is flanked by two large piers and is accessible from the Or Tambo Parade that stretches along the Golden Mile. Due to its good surf conditions North Beach is an ideal holiday destination. North Beach provides facilities for surfing, body boarding and skateboarding, as well as swimming and sun bathing.
Image Courtesy of Flickr and Peter Black2007.
Sight description based on Wikipedia.
7

Golden Mile Funfair is one of the most popular destinations on the Golden Mile. It features amusement rides, side stalls, games, roller coasters and other attractions that you and your children will enjoy. So if you want to have fun on the Golden Mile, you should definitely visit the Funfair!
Image Courtesy of Flickr and Flóra.
8

South Beach runs down to the Point from the junction of Dr. Pixley Kaseme Street and Or Tambo Parade. It follows along Or Tambo Parade and Erskine Terrace. South Beach is perfect for swimming, especially if you have children, since it is protected from large waves. It also features playgrounds, trampolines and bike rental facilities. There is a beautiful promenade along the golden sand, which runs uninterrupted all the way down to the Point.
Image Courtesy of Wikimedia and Nashmaximus.
9

uShaka Sea World is the 5th largest aquarium in the world, with 32 tanks totaling 17,500 cubic meters of water. The underground aquarium is designed around 5 shipwrecks, with its entrance through the above ground "Phantom Ship", which contains several restaurants including the "Cargo Hold," with a wall sized shark aquarium visible from most of the dining areas, and the "Upper Deck," with views of the open sea exhibits that surround the "ship". The dolphin stadium can seat 1,200 visitors, and the seal stadium can seat about 450.

Image Courtesy of Flickr and Peter Black2007.
Sight description based on Wikipedia.