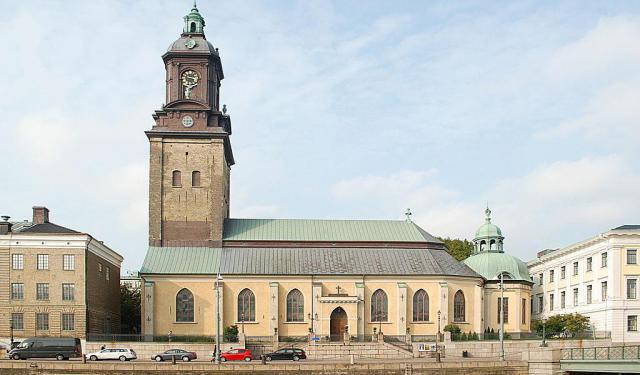 Image by David Castor on Wikimedia under Creative Commons License.

Churches are an important part of Gothenburg’s cityscape and history. They rise proudly above the city and its outskirts. Besides playing a major role in Gothenburg's spiritual life, they also have a great deal of architectural significance. Take this walking tour to admire some of Gothenburg’s most grandiose churches.
How it works: Download the app "GPSmyCity: Walks in 1K+ Cities" from iTunes App Store or Google Play to your mobile phone or tablet. The app turns your mobile device into a personal tour guide and its built-in GPS navigation functions guide you from one tour stop to next. The app works offline, so no data plan is needed when traveling abroad.

Tyska Church, or Christina Church, is located in the heart of Gothenburg. It is named in honor of King Gustav II Adolf's daughter, Christina. Built from yellow brick, this church has a tower on its west side, designed by Carl Fredrik Stockholm Adelcrantz, and a chancel to the east. The church also boasts impressive bells, cast in 1691.
Image by D.O.G.A. on Wikimedia under Creative Commons License.
2

The Gothenburg Cathedral is the seat of the bishop in the Church of Sweden diocese of Gothenburg.

It was part of the established Church of Sweden and had been at first named "Gustavi church" after Gustavus Adolphus. It was also known as Svenska kyrkan (the "Swedish church"), to distinguish it from Gothenburg's German - and Dutch-language Christinenkirche, known familiarly as Tyska kyrkan (the "German church"). By the change from the superintendentcy title to a bishopric and the establishment of a cathedral chapter in 1665 it was elevated to the status of cathedral.

The cathedral as we know it today was designed by architect Carl Wilhelm Carlberg. Carlberg died on 14 April 1814 and construction was completed followed by his disciple. The cathedral is built classical style. It is 59.4 meters long and 38 meters wide - including the new transept, which did not previously exist, while cattle and nave has the width of 22.86 meters. Furthermore, the nave interior height 14.25 metres and 52.85 meters in the tower's height. A clear example of classical style cathedral is the big head Portal one in the West. It is framed by four Doric columns (ancient Greek columns), which receives a pediment party. They were carved in Gothenburg by Scottish sand by Aberdeen.

Image by Harri Blomberg on Wikimedia under Creative Commons License.
Sight description based on wikipedia
3

St. Andrew's Church was established in 1859 and is part of the Diocese in Europe. It was designed by Major Adolf Wilhelm Edelsvärd and funded with contributions of its members at home and from England. This Neo-Gothic church is 24 meters long and 10.5 meters wide.
Image by David Castor on Wikimedia under Creative Commons License.
4

The Haga Church was built between 1856 and 1859. The church and the pulpit were designed by architect Adolf W. Edelsvärd. Its first organ was installed in 1861 by the Danish firm Marcussen & Søn and was rebuilt to a pneumatic action in 1911. Between 1945 and 1951 it was replaced with an electric model by the Magnusson organ building firm. It was restored close to the original condition between 2002 and 2004 by Åkerman & Lund. A meantone organ by John Brombaugh was installed in the north balcony in 1992.
Image by Martin Olsson on Wikimedia under Creative Commons License.
Sight description based on wikipedia
5

Lutherska Missionskyrkan, Gothenburg’s oldest church, is located in an apartment building. Its 50-person choir is well-known throughout the country. The members of the church cordially welcome visitors to their sermons.
Image by David Castor on Wikimedia under Creative Commons License.
6

Vasakyrkan, established in 1909, is a beautiful church located in the center of the city, in the area of Vasastaden, between Hvitfeldtska and Vasaparken. It is constructed out of granite from Bohuslän. The church saw major renovations between 1999 and 2000.
Image by Västgöten on Wikimedia under Creative Commons License.
7

Örgryte Gamla Kyrka is a Romanesque stone church constructed in the 13th century on the site of a former nine-meter stave church. It has a beautiful tower and its ceiling is adorned with brightly-colored Rococo frescoes. In its cemetery many notable figures are buried, among them, Victor Hasselblad and his wife Erna.
Image by Harri Blomberg on Wikimedia under Creative Commons License.
8

Örgryte Nya Kyrka, a Gothic style church built of red brick, is run by Gotenburg’s Örgryte Assembly. It was designed by Adrian Peterson. The church contains a famous pipe organ and an altar made of paper-sliced oak.
Image by Harri Blomberg on Wikimedia under Creative Commons License.
9

Sankt Pauli Kyrka, designed by architect Adrian C. Peterson, was built in 1880-1882 in a Romanesque style. The inauguration of this sacred place was held on January 15, 1882. The altar ornament consists of two oil paintings, Crucifixion and Resurrection, by Gotthard Werner.
Image by Harri Blomberg on Wikimedia under Creative Commons License.