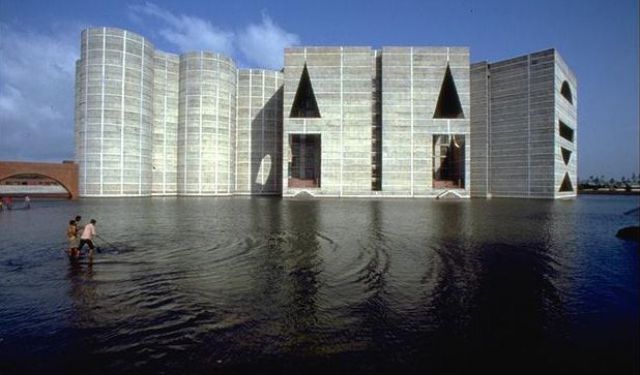 Image by Dhakasumit2003 on Wikimedia under Creative Commons License.

Dhaka's government district area has some attractions worth visiting. The major draw in this area and in all of Dhaka is the Jatiyo Sangsad Bhaban complex, which is one of the biggest legislative structures in the world. Here you can also visit Bangladesh-China Friendship Conference Centre, which is one of the biggest convention centers in the world. This tour also contains other significant and appealing stops. Don’t miss the opportunity to visit some of the best of Dhaka's attractions.
How it works: Download the app "GPSmyCity: Walks in 1K+ Cities" from iTunes App Store or Google Play to your mobile phone or tablet. The app turns your mobile device into a personal tour guide and its built-in GPS navigation functions guide you from one tour stop to next. The app works offline, so no data plan is needed when traveling abroad.

The Speaker and Deputy Speaker Residences are part of the Jatiyo Sangsad Bhaban complex. The decision to construct these buildings during the 2001 government term was a controversial one. The government said that they were acting to "complete" the plans of the complex's architect, Louis Kahn, but some of the country's notable architects argued that no such section existed in the original plans. Construction has been halted as a result.
Image by freddie boy on Flickr under Creative Commons License.
2

Gono Bhaban is the official residence of the Prime Minister of Bangladesh, located next to Chandrima Uddan. For some reason, no one lived in this structure for some time and as a result it became uninhabitable. After renovations, the building was once again usable.
Image by Generationbass.com on Flickr under Creative Commons License.
3

Jatiyo Sangsad Bhaban, the National Parliament of Bangladesh is the Jatiyo Sangshad Building of Bangladesh, located in the capital Dhaka. It was created by architect Louis Kahn and is one of the largest legislative complexes in the world. It houses all parliamentary activities of Bangladesh.

Construction of the Jatiyo Sangshad Bhaban began in 1961 by the Government of Pakistan as a permanent building for the federal legislature of both West and East Pakistan. However, it was the eighth session of the second parliament of Bangladesh that first used it on 15 February 1982 after its construction was completed on 28 January of the same year. The Jatiyo Sangshad Bhaban has been in operation and has acted as the sole complex used as the National Assembly ever since.

Louis Kahn designed the entire Jatiyo Sangsad complex, which includes lawns, lake and residences for the Members of the Parliament. The architect’s key design philosophy was to represent Bangladeshi culture and heritage, while at the same time optimizing the use of space. The exterior of the building is striking in its simplicity, with huge walls deeply recessed by porticoes and large openings of regular geometric shapes. The main building, which is at the center of the complex, is divided into three parts – the Main Plaza, South Plaza and Presidential Plaza. An artificial lake surrounds three sides of the main building of Jatiyo Sangsad Bhaban, extending to the Members of Parliament hostel complex. This skillful use of water to portray the riverine beauty of Bangladesh adds to the aesthetic value of the site.

Image by Justintravels on Wikimedia under Creative Commons License.
Sight description based on wikipedia
4

The Bridge runs over Crescent Lake and connects the Jatiyo Sangsad Bhaban complex with the Chandrima Uddan. It has an imposing architecture that looks magnificent, especially at night, when it is lit and has its image reflected in the water of Crescent Lake.
Image by Tanweer Morshed on Wikimedia under Creative Commons License.
5

Chandrima Uddan, also called Zia Uddan, is a public park placed on the north of Jatiyo Sangsad Bhaban complex. Crescent Lake is between these two attractions. You can access the park by walking on the bridge, which runs over the lake. The park is famous as the site of the grave of the former Bangladesh President, Ziaur Rahman, who was killed in 1981. His mausoleum is a large, impressive structure in the middle of the park. This spot is visited often by locals as well as tourists, who enjoy jogging and skating here. The park itself is a good place for relaxing and resting. Both the complex and the park are a high security zone.
Image by - Ariful H Bhuiyan | ahbphotos.com - on Flickr under Creative Commons License.
6

The Bangladesh-China Friendship Conference Centre is one of the biggest convention centers in the world, built with technical and financial support from China. The building has a surface of 20,000 square meters and an area of 30,000 square meters around the building which houses water fountains, a parking area and 128 flag poles. The structure is equipped with all the latest technologies. The Center hosts significant events, conferences, meetings and much more. The building has an outstanding hall used for exhibition purposes at a national as well as an international level.
Image by Nick Tay on Flickr under Creative Commons License.
7

Bhasani Novo Theatre was founded by the Ministry of Science and Information & Communication Technology. It is an informal science educational center. Here you can watch an interesting planetarium show in a well-furnished auditorium. There is a model of the solar system, portraits of great scientists and various scientific exhibitions. Other events are organized as well, such as an Internet Fair, a Space Fair, Scientific Workshops and more. It is open every day except Wednesdays.
Image by -Niloy- on Flickr under Creative Commons License.