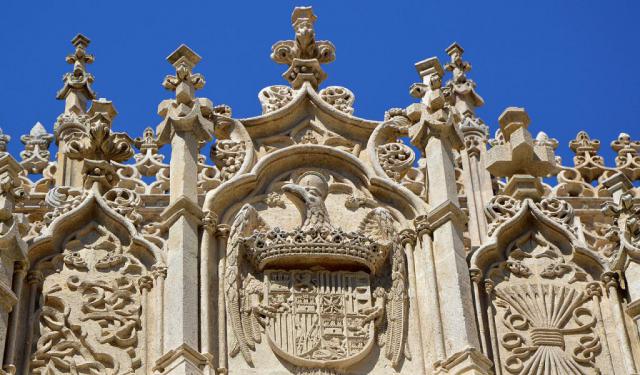 Image by Dorota Strzelecka on Wikimedia under Creative Commons License.

The city of Granada is a fine work of art just by itself. It spans from the beautiful, round shaped, miniaturist Arabic style to the angled, majestic, solid Gothic and Baroque. This tour highlights the history of art styles blended into the history of Granada, manifested in many of the local churches, monasteries and cathedrals. Take this tour to please your eye and challenge your imagination.
How it works: Download the app "GPSmyCity: Walks in 1K+ Cities" from iTunes App Store or Google Play to your mobile phone or tablet. The app turns your mobile device into a personal tour guide and its built-in GPS navigation functions guide you from one tour stop to next. The app works offline, so no data plan is needed when traveling abroad.

Plans for the construction of Granada Cathedral were put in place immediately after the city was returned to Christian rule in 1492. Originally designed as a Gothic structure, it had been re-imagined as a Spanish Renaissance building by the time construction began in 1518. Local architect Egas was responsible for laying the foundations, before being replaced by Diego de Siloé. The great city planner and architect, responsible for designing many of Granada’s finest buildings, spent four decades working on what would become the city’s most important place of worship.

Finally completed nearly 200 years after the Conquest of Granada, the church was restored and reinvented by four further architects after de Siloé. Granada Cathedral is notable for its five-naved, vast main hall, with an elegant gilded dome at the center. The bell tower is visible across the city, yet it was originally intended to be much higher, and paired with another tower immediately next to it. These were never completed, as the foundations were not strong enough to support these ambitious plans. The cathedral is open to the public throughout the year, and still holds regular services. Guided tours of the crypt, which is the final resting place of many of the Catholic Kings, are also available.

Image by Antonio Peramo on Wikimedia under Creative Commons License.
2

The Capilla Real was commissioned by King Ferdinand and Queen Isabella in 1504, following the Conquest of Granada which reunited much of Spain as a Christian nation. The couple, ruling monarchs of Spain at the time, decided that Granada would be their final resting place, and requested that a burial chapel be built in the city. The Capilla Real, or Royal Chapel, was built between 1505 and 1517 in the Gothic style, and was dedicated to Saint John the Baptist and Saint John the Evangelist. Isabella died as the chapel was being constructed, whilst her husband passed away a year before the building was completed. Their remains, along with other members of the Spanish royal family, are interred here.

Restored in the 18th century and converted into a museum in the early 20th century, the chapel hosts two civic religious ceremonies each year, on 2nd January and 12th October. These services mark the Taking of Granada and Columbus Day respectively. The chapel is open to the public from Monday to Saturday, 10.15am to 1.30pm and 3.30pm to 7.30pm, and from 11pm to 7.30pm on Sunday, with the same two hour siesta break as in the week. The chapel closes an hour earlier in the winter months. Admission is 4 Euros.

Image by MarkusMark on Wikimedia under Creative Commons License.
3

The San Jose Church is found in the district of Albayzin, one of a collection of churches in the area which were formed from the ruins of mosques and Almohad palaces. The church tower is believed to have once been the minaret for the ‘mosque of the Hermits’, which stood on this spot until 1517, when the church replaced it. At the foot of the tower you can see a Moorish era water deposit. It is in buildings like San Jose church, and the nearby San Miguel and Santa Isabella places of worship, that the crossover from Muslim to Christian domination of Granada is most visible.

The church was designed by Rodrigo Hernández in the ojival manner. Once you pass through the Elvira stone portal, you can enjoy the fine, gilded decoration typical of churches built following the return of Christianity to Andalucía. The central nave is supported by four arches, bearing the arms of the Catholic Kings. At the centre of the church, a large entablature stands on Corinthian columns. In the middle of this, you can see a sculpture of Christ Crucified in the style of Pablo de Rojas. There are examples of fine religious art and sculptures dotted throughout the many corners of this church.

Image by Balbo on Wikimedia under Creative Commons License.
4

The Iglesia de San Gil y Santa Ana stands opposite the Santa Ana Plaza in Granada’s historic city centre. A small, elegant 16th century church, it is one of the city’s most sought after wedding venues for the wealthy middle class of Andalucía. The church was designed by renowned local architect Diego de Siloe, and was built in the Renaissance style. The building’s front façade, facing onto the adjacent plaza, features three niches, which each contain the statue of a saint, as well as engravings of the Virgin Mary and Jesus.

The church was constructed according to the architect’s specifications. De Siloe wanted to create a heavily decorated, spectacular building which combined elements of Arabic architecture with Christian imagery. This is the unique style behind many of the grand churches of Granada. One example of Arabian influence on the design is the Mudejar ceiling – formed from carved wood, it is representative of decoration produced by the Moorish craftsmen that once lived in the city.

The Church of San Gil y Santa Ana is open to the public for much of the year, and still holds regular services. During the summer months, the building hosts weddings each weekend for the great and good of Granada. Even if you’re just visiting, it’s possible to book the venue for your own wedding.
Image by José Sabater Montes on Wikimedia under Creative Commons License.
5

The Church of Santo Domingo stands in the plaza of the same name in the centre of Granada. The history of the church is something of a mystery, as the architect is unknown, and it is made up of several different architectural styles. The building was originally part of the Monastery of Santa Cruz, a Gothic design begun in 1512. This explains the Gothic style of the church’s bows and wineries. Other elements include Baroque and late Renaissance, and there are even elements of Roman design throughout the structure. It is believed that building of the church was halted after the outer walls were completed, with the interior added some years later.

The church façade is notable for a large stone portico with arched Doric columns. The arches feature the initials and shields of King Ferdinand and Queen Isabella. Above the porch, you can see two sculptures of the monarchs’ victories in battle. The convent was located to the right of the portal in medieval times. The church is still a practising Catholic place of worship. Services take place each morning, from 8.30 to 9.30am on Monday to Saturday, and from 9.30 until 2pm on Sundays. There are also services each weekday from 7.30 to 8.30pm.
Image by auntjojo on Flickr under Creative Commons License.
6

Iglesia de San Matias dates from the 16th century. It's known mainly for its two veils of Sebastian de Alcantara. Inside, you can see a beautiful 18th century Baroque altarpiece, the masterpiece by Blas Moreno, featuring the images of Risueño.
Image by fradaveccs on Flickr under Creative Commons License.
7

The Basilica of Angustias was built in 1617, several years after many of Granada’s churches were completed. The building was designed by Juan Luis Ortega. The church has a nave, transept and eight sided chancel. The exterior of the building is notable for its twin towers, with tiled pinnacles. An alcove at the front of the church houses a pieta by Bernardo and Jose de Mora. The interior is notable for its large, ornate altarpiece, typical of the style found in many of Grenada’s churches. It contains an image of Our Lady of Sorrows at its centre. Originally a carving, it was repainted as part of restoration work on the basilica.

Other notable features of the church’s exterior include a number of statues of the Apostles, sculpted by Pedro Duque Cornejo, and paintings by scholars of Granada’s Baroque school. Art works by Juan Leandro de la Fuente, Ambrosio Martinez and Miguel Jeronimo de Cieza, amongst many others, can be seen inside the basilica. The church is located on Carrera del Genil, close to the Puerta Real. Still an active place of worship, it is only open during service times. The church holds masses each weekday morning, and twice on Sundays.
Image by Antonio Peramo on Wikimedia under Creative Commons License.