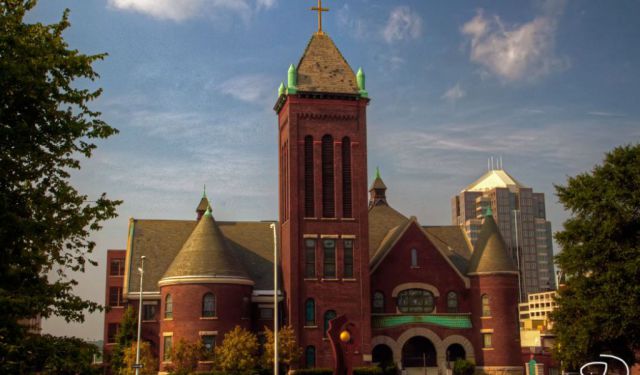 The architectural styles of Greensboro’s buildings include Romanesque, Neoclassical, Gothic, Colonial Revival, Modernist and Post-Modern designs. Many of them date back to the last two centuries and a number of them are included in the National Register of Historic Places. Take the following tour to discover Greensboro’s architectural treasures.
Image Courtesy of Flickr and Jim Dollar.
How it works: Download the app "GPSmyCity: Walks in 1K+ Cities" from iTunes App Store or Google Play to your mobile phone or tablet. The app turns your mobile device into a personal tour guide and its built-in GPS navigation functions guide you from one tour stop to next. The app works offline, so no data plan is needed when traveling abroad.

The Old Central Fire Station, a relic of Greensboro’s past, is included in the National Register of Historic Places. Built in 1926 and closed in the 1980s when the new Church Street Station was built, it was designed by architect Charles Hartmann in an Italian Renaissance style. The architecture of this two-story building includes classical arches supported by terracotta columns. Today the Old Central Fire Station is a part of the Marriott Hotel.
Image Courtesy of Flickr and Justin Ervin.
2

The Jefferson Standard Building is a 233 ft (71m) skyscraper in Greensboro. It was completed in 1923 as the headquarters for Jefferson Standard Life Insurance Co (now known as Lincoln Financial Group) and has 18 floors. Until it was superseded by the Nissen Building in Winston-Salem in 1927, it was the tallest building in North Carolina (succeeding the Independence Building in Charlotte) and the tallest building between Washington, D.C. and Atlanta, Georgia. It was named to the National Register of Historic Places in 1976. A 20-story addition first known as the Jefferson-Pilot Building and later the Lincoln Financial Building was finished in 1990.

Julian Price, president of Jefferson Standard Life Insurance, asked New York City architect Charles C. Hartmann to design his company's new headquarters. Price paid for the building in full because he did not believe in debt. The Jefferson Standard Building copied the Equitable Building in its use of a U-shape allowing more light and air into more of the building. The exterior is terra cotta and granite. Architectural styles include Neo-Gothic, Neo-Classical and Art Deco. The terra cotta tile facade incorporates Beaux-Arts and Romanesque characteristics. Above the doorway is a bust of Thomas Jefferson, for whom the company was named, with Buffalo nickels on either side of ground floor windows to represent thrift and economy.

Image Courtesy of Flickr and Justin Ervin.
Sight description based on Wikipedia.
3

West Market Street United Methodist Church, erected in 1851, was designed in the Richardson Romanesque style. In 1893 stained glass windows from Chicago were added. During the latest renovation additional buildings were constructed and the Dobson-Rosales organ was installed. One of this church’s most notable attributes is its Via Dolorosa paintings from the 1890s.
Image Courtesy of Flickr and Justin Ervin.
4

Designed by architect Edward Sibbert and constructed in 1930, this was his first building for the Kress Company. As with many of his other works, it was designed in the Art Deco style with a terracotta face. Additional elements include inlaid ornaments on the corners, coats of arms and stunning metalwork. Today the Kress Building houses offices, a nightclub and an entertainment center.
Image Courtesy of Flickr and Justin Ervin.
5

The Greensboro Amtrak Station is served by three passenger trains, the Crescent, Carolinian and Piedmont. Previously, the station was located at the main rail yard about two miles to the west of downtown. Greensboro Station was originally built in 1927 as the Greensboro Southern Railway Depot. It was a replacement for an 1899 Southern Railway Depot that still exists today, albeit without the gabled-third story and cupola it had in the past.

The 1927 depot was donated to the city in 1978, a year before the Southern Railroad finally gave up passenger service. Though efforts to return service to the old station date as far back as 1993, it wasn't reopened to the public until October 1, 2005.

Designed by the New York architectural firm of Alfred Fellheimer & Steward Wagner, the 1927 Beaux-Arts facade features Ionic columns, a full entablature, and a three-story arched entry. Inside, the ticketing area features a vast mural displaying the service area of the Southern Railway system in the 1920s.

Image Courtesy of Wikimedia and Rtjacob.
Sight description based on Wikipedia.
6

Blandwood Mansion, originally built as a four room Federal style farmhouse in 1795, is the restored home of two-term North Carolina governor John Motley Morehead. Blandwood is the oldest building on original foundations in the city of Greensboro. Originally located within a rural context, it is a remarkable survivor of urban development as the city grew around the house. Its primary national significance is its role as the earliest identified Tuscan Villa in the United States (1844).

Architect A. J. Davis designed the building to resemble villas of Tuscany (though he never visited Italy) using wide overhanging eaves, low rooflines,casement windows, stucco-on-brick veneer, and most notably the tall prospect tower which dominated the facade. Davis adaptively reused the existing free-standing kitchen by expanding its size and matching it with a nearly identical building on the other side of the house, creating freestanding hyphen wings with arcades. The building is also a rare example of grand antebellum architecture in the Piedmont section of North Carolina - a territory characterized by small farms and a relatively small enslaved population.

The building was purchased reserved by Preservation Greensboro Incorporated, a citywide non-profit organization dedicated to historic preservation in 1966 as a museum. The nonprofit initiated a program of restoration, including paint analysis, archaeological investigation, a furnishings plan, reconstruction of dependencies, and restoration of surrounding gardens. Many items original to the house were returned by members of the Morehead family in the 1960s and 1970s. It was placed on the National Register of Historic Places in 1970, and recognized as a National Historic Landmark in 1988. The house is recognized by architectural historians as the "Embodiment of the antebellum 'spirit of improvement,'" in North Carolina, and the "most important building in Greensboro."
Image Courtesy of Flickr and Preservation Greensboro Inc.
Sight description based on Wikipedia.
8

8) Church of the Covenant Presbyterian

Built in 1914 to replace a wooden church from 1906, the Church of the Covenant Presbyterian was designed by Greensboro architect Harry Barton. This Neoclassical Revival building includes stunning Greek columns, and beautiful wings which have been added over the years.
Image Courtesy of Flickr and Jim Dollar.
9

One of the most stunning buildings of the Victorian Era, it was named after Julius I. Foust, president of the University of North Carolina Greensboro. Designed by the architectural firm Epps & Hacket and completed in 1892, this Romanesque Revival structure is reminiscent of the fortified architecture of the Middle Ages. The Foust Building features two identical three-story towers, arches and decorative brickwork. This impressive building was included in the National Register of Historic Places in 1980.
Image Courtesy of Flickr and Justin Ervin.