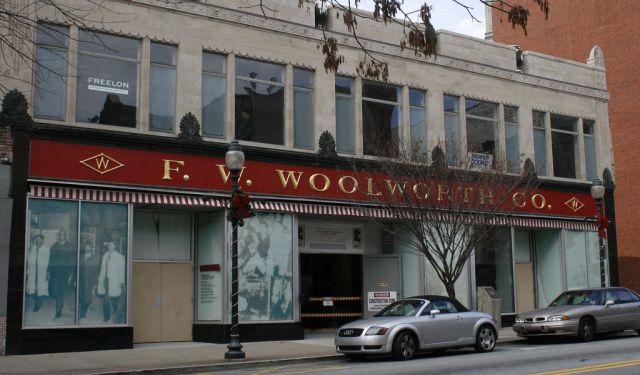 Image by David on Flickr under Creative Commons License.

Greensboro, established in 1808, has witnessed much history, which is reflected in the city’s museums. Greensboro boasts numerous art galleries displaying the works of prominent local artists, including watercolor, oil painting, sculpture, graphics, etchings and more. If you want to become better acquainted with the cultural life and history of Greensboro, visit its fabulous museums and galleries highlighted in the following tour.
How it works: Download the app "GPSmyCity: Walks in 1K+ Cities" from iTunes App Store or Google Play to your mobile phone or tablet. The app turns your mobile device into a personal tour guide and its built-in GPS navigation functions guide you from one tour stop to next. The app works offline, so no data plan is needed when traveling abroad.

The Greensboro Historical Museum, located downtown, was established in 1924, making it the city’s oldest museum. Located in the former First Presbyterian Church, constructed in the Romanesque style, this museum offers 15 galleries including the Voices of a City: Greensboro North Carolina exhibition that interprets more than 300 years of Greensboro and Guilford County history. Additional exhibitions include First Lady Dolley Madison, Welcome to the Gate City, the Murphy Confederate firearms collection, Zenke miniature rooms and more. The Museum Shop features "history in every purchase" with merchandise inspired by the museum’s collections and exhibitions. Admission and parking are free. Museum hours: 10 am to 5 pm, Tuesday through Saturday; 2 pm to 5 pm on Sunday; closed Mondays and City of Greensboro Holidays.
Image by Greensboro Historical Museum under Creative Commons License.
2

The International Civil Rights Center and Museum building is the former location of the Woolworth's in which the Greensboro sit-ins took place, beginning February 1, 1960. The museum's aim is to memorialize the actions of four students from North Carolina Agricultural and Technical State University, those who joined them in the daily Woolworth's sit-ins, and others around the country who took part in sit-ins and the civil rights movement.

The museum opened February 1, 2010, on the 50th anniversary of the original sit-in, with a ribbon cutting and opening ceremonies Architect Charles Hartmann designed the building in an art deco style. Completed in 1929, the building in the 100 South block of Elm Street was then known as the Whelan Building because Whelan Drug Co. rented most of the space. Woolworth moved into the site in 1939.

Image by dbking on Flickr under Creative Commons License.
Sight description based on wikipedia
3

Ambleside Gallery, located in the city center, exhibits works in pastel, oil, watercolor, pencil and mixed media, including a wonderful collection of lithographs and woodcuts and prominent sculptures from national and international artists. Custom framing and restoration services are available here as well. The cherry wood arches and old furniture add a special charm to this gallery. Hosting occasional concerts, Ambleside Gallery is open Tuesday-Saturday from 11:00 am to 6:00 pm and till 9:00 pm on Friday.
Image by Wonderlane on Flickr under Creative Commons License.
4

Artmongerz Gallery is easy to find due to its bright colorful sign. Opened in 2005, it displays the work of ten local artists, including bold and colorful figurative and abstract painting, found art sculpture, portraits and more. Artmongerz Gallery is open Thursday through Saturday from 12:00 pm to 8:00 pm and Sunday 1:00 pm - 5:00 pm.
Image by Ajay Tallam on Flickr under Creative Commons License.
5

Weatherspoon Art Museum, founded in 1941 at the University of North Carolina, possesses a grand collection of contemporary American art. Featuring nearly 6,000 works, including post-war paintings, sculpture, photography and graphic art, it also houses beautiful prints and bronze works by Henri Matisse. Besides its stunning permanent collection you can see temporary exhibitions here. It also has a sculpture garden worth seeing. Welcoming about 30,000 visitors annually.

Image by Ptncsu12 on Wikimedia under Creative Commons License.

Greensboro contains many cultural venues exhibiting local art, crafts, music and theater performances, which are highly appreciated by residents and visitors. You will find unique collections in its galleries and museums, as well as major cultural events in its arenas. Take the following tour to better acquaint yourself with the cultural life of Greensboro.